The platform rolled out several special features during the World Cup aimed at helping it attract and retain new users, providing a hint as to how Twitter plans to combat its problem of decelerating user growth.

Before the World Cup even began, Twitter rolled out a special starter kit for Twitter newbies that instructed them on how to best use the platform to follow the tournament. New Twitter users are usually left to navigate Twitter alone, a daunting task for someone not acquainted with handling the medium’s deluge of information, hashtags and @ mentions. This World Cup-specific feature, however, provided step-by-step instructions on how new users can create profiles and lists of followers that reflected their soccer interests (and real-life friendships). 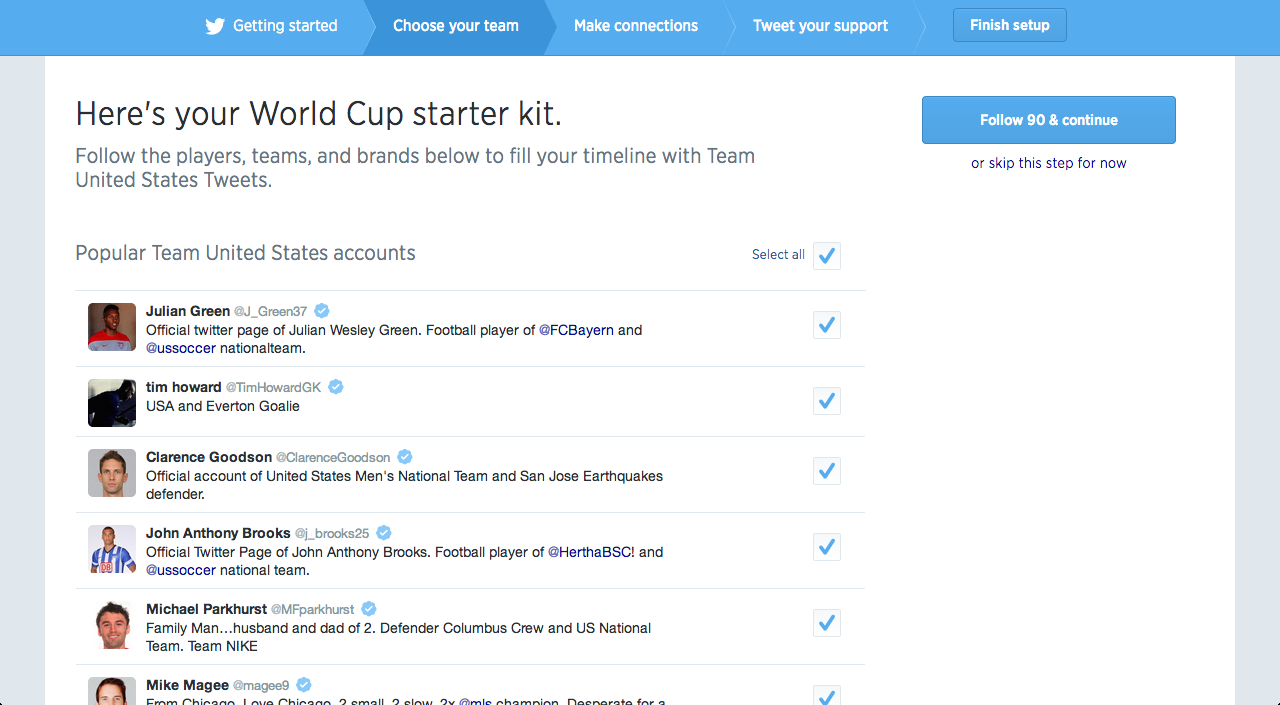 Matt Wurst, general manager of social media at digital agency 360i, said Twitter’s World Cup features are a “smart move,” but that Twitter needs to keep marketers abreast of how it plans to add new users beyond a weeks-long tournament that occurs only once every four years.

“Twitter’s challenge is figuring out how to scale not just quantity of users but quality of users, keeping them engaged during and beyond the World Cup,” Wurst said.

As the tournament has progressed, Twitter has done its best to make sure these newcomers didn’t forget about their accounts, a problem the platform has grappled with in recent months. Twitter’s number of monthly active users grew 5.8 percent from the fourth quarter of 2013 to the first quarter of 2014, down from 9.3 percent growth from the last quarter in 2012 to the first quarter in 2013, according to Twitter’s latest quarterly report.

Twitter has pushed reminders out to users that certain games were taking place and suggested checking out relevant tweets. Twitter even constructed customized Twitter streams solely for housing tweets about given games, similar to how it curates tweets about popular TV shows. These features were also shown to existing users to increase overall engagement during the matches.

While these features were specially made for the World Cup, they are all part of Twitter’s continued effort to combat its declining growth. The company’s stock slid on April 29 when it reported slowed user growth, and its World Cup features are a way for it to experiment with new ways to lure in new users and ensure they don’t stop using Twitter once they’ve created an account.

Some of Twitter’s new World Cup onboarding features may stick around depending on how well they performed throughout the tournament. Twitter will be evaluating their effectiveness at the tournament’s end.

“The World Cup features allow users less familiar with the platform to create affinity quickly and then they can grow out of that as they get more experienced,” he said.

Berger added that he’s bullish on Twitter even in spite of Wall Street’s concern with the platform’s user growth (or, rather, lack thereof).

“My opinion on Twitter hasn’t really changed. I view it as an important part of our digital strategy to connect with customers and prospects to drive interaction and gain insight,” he said. “I think Twitter is just dealing with a maturation of their ‘fit’ in the world of digital.”

This being advertising, though, perception is often more important than reality. And if Twitter does garner a reputation for being stagnant or passe, it risks losing advertisers, regardless of how well its ad products are performing.

“Marketers don’t want to be with anyone on the decline. They want to bet on the winners. That is where Wall St. does come into play; if people smell blood in the water and think Twitter’s best days are behind it, that will start scaring off advertisers and they’ll start focusing far more on what else is out there,” said David Berkowitz, CMO of digital agency MRY. “Twitter isn’t there yet. That’s why Twitter ultimately needs to fix the growth story if they want to maintain advertising interest.”