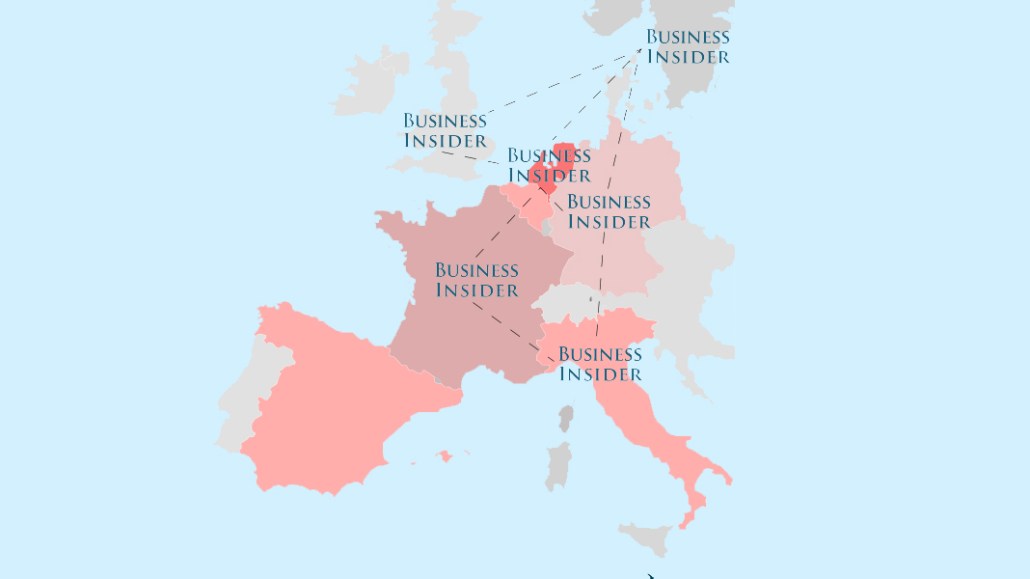 Business Insider has aggressively expanded its editorial operations in Europe, opening seven local language sites in the last two and a half years. It’s now making it easier for advertisers to run local campaigns.

Previously, if a U.K.-based client wanted to run an ad campaign across Europe, it would have to deal with each local office. BI’s European sales network, which is run by BI’s 12-person London sales team, allows clients to run the same campaign in the markets BI operates in, in local languages.

“Trying to reach multiple audiences across Europe is always challenging because of local languages,” said Julian Childs, managing director of Business Insider UK. “We can now offer the global audience and the local audience with BI’s same style, tone and consistency, without the inefficiencies of going to each market.”

BI has already seen some early success with this model from running several campaigns earlier this year. In April, the publisher ran a branded-content campaign for cloud-computing company Oracle. Six sponsor-content pieces ran in four markets: the U.K., Germany, France and the Netherlands, promoting a report from Oracle, “HR in 2017: championing a digital future in the boardroom.” The articles covered topics like how robots and artificial intelligence will change companies and why big data has increased the importance of human resources departments.

The centralized London sales team will work closely with BI’s European bureaus to manage translations. BI has local publishing partners: Grupa Onet in Poland, Bonnier Media in the Nordics, GEDI Gruppo Editoriale in Italy, Z24 in the Netherlands, Prisma Media in France and Finanzen (part of Axel Springer, BI’s parent company) in Germany. Business Insider Spain will be added to this list later this year.

Licensing deals with existing publishers reduce the risk and setup cost when expanding internationally. It’s a route many publishers take, including Forbes and Mashable. The former has taken a while to build scale in Europe, but has offered clients BrandVoice campaigns (Forbes’ native ad program) for the last year.

This offer sets BI apart, according to Dan Chapman, head of digital at Mediacom. European legislation is a thorny issue, and with the General Data Protection Regulation coming into play next year, the timing is right for more regional — rather than global — thought leaders, especially in finance and tech, two areas in which BI specializes. “Anything business-related will have European, rather than global impact; there’s a lot more macro decision-making being made,” he said.

According to comScore’s latest figures, Business Insider has 5.7 million monthly unique visitors in the U.K. The majority of the publisher’s revenue comes from ads: In the U.K., programmatic revenue accounts for between 30 and 35 percent of the total; content and direct ad sales account for over 50 percent; and subscriptions and events make up the rest.