How brands and publishers define success in native

Back in 1900, Michelin released its first guide for French motorists. Complete with helpful maps and hotel names, the Michelin Guide was an immediate success. As the content itself had little to do with the brand’s product – tires – this was native advertising in its earliest form.

Michelin’s goal was clear: More drivers, more tires. But somehow over the past 115 years, the goals of branded content have become less defined. The industry has yet to determine a definition of native success. Many brands still live and die by publisher metrics (impressions, shares and clicks), despite a lack of data connecting them with engagement or revenue.

The definition of success in native advertising, it turns out, varies by publisher and brand. Here, then, is a look at how native gets measured in the wild.

The waning of CTR
Click-through rate (CTR) has ruled digital advertising for decades, but brands need to dig deeper with native content. A successful campaign should “generate more complex reporting,” said Justin Choi, CEO of Nativo. “[These metrics] are fighting for relevancy in the face of data suggesting consumers who engage less share more, and vice versa.”

That isn’t to say publisher metrics like CTR are meaningless. “CTR has a time and a place in branded content,” said Paul Josephsen, vp of integrated marketing at Thrillist Media Group. “It’s great for things like optimizing headlines and measuring engagement against a specific exposure, but it’s inherently flawed.”

The flaw is that a click may have little to no impact on a particular brand. BuzzFeed, for example, might struggle to prove how this listicle of the world’s cutest cows improved perception of or drove revenue for Laughing Cow – despite its nearly 20,000 shares (figure provided by Nudge Analytics). 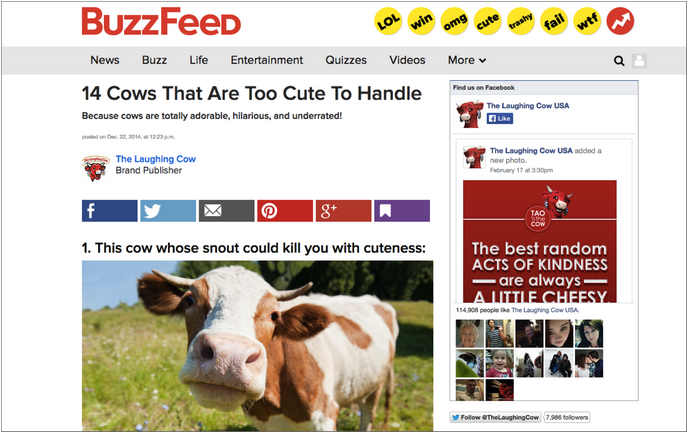 “We try to get our advertisers not to look exclusively at CTR,” said Rich Antoniello, CEO of Complex Media. “It sets a very dangerous precedent wherein branded content reads like clickbait.”

And while CTR itself has merit – “it reflects discovery, interest and engagement,” said Choi – it shouldn’t make or break a campaign. To truly understand performance, one must be versatile. Ben Young, CEO of Nudge Analytics, for example, will explore CTR as well as average attention minutes.

“The idea isn’t death to CTR,” explained Josephsen. “It’s that there’s more to life than CTR.”

The metrics that matter
No two initiatives are alike, and so performance metrics should vary by campaign. Publishers need to fully understand the objectives of a campaign before pen is ever put to paper.

“The first thing we do is define our advertisers’ objectives,” said Josephsen. “We ask them whether they’re focused on awareness, engagement, brand affinity, etc., and then tell them, ‘Thrillist will be successful at that one thing.’” This allows their team to be more creative, untethered from the promise of clicks.

Antoniello’s team at Complex also defines its approach by the client’s objectives. Everything from strategy to copy to optimization is geared entirely toward a single goal.

So when Mountain Dew approached Complex looking for a consistent influx of unique users to engage with its brand, Complex developed Green Label – an always-on, digital magazine. The content is custom fit to the soda brand’s specific goals and objectives.

The metrics of the future
“By 2017, brands will measure success based on audience reach and average attention minutes,” predicted Young. “The industry also needs to connect the dots between devices and audience overlap.”

The idea of “connecting dots” dominates this fragmented industry. Choi, for example, is focused on the idea that “content not be an island apart from conversions,” and that we need to close the loop between engagement and actions.

Josephsen sees the native industry as one that needs to evolve along with its performance metrics. One of the biggest changes he predicts is programmatic native, which he feels will soon be driven by cookies and audience profiles.

Antoniello, however, struggles to see how programmatic native can ever really drive success. “It doesn’t make any sense to me,” he said. “The context of native is what makes it successful – not its location. And voice simply cannot be automated.”