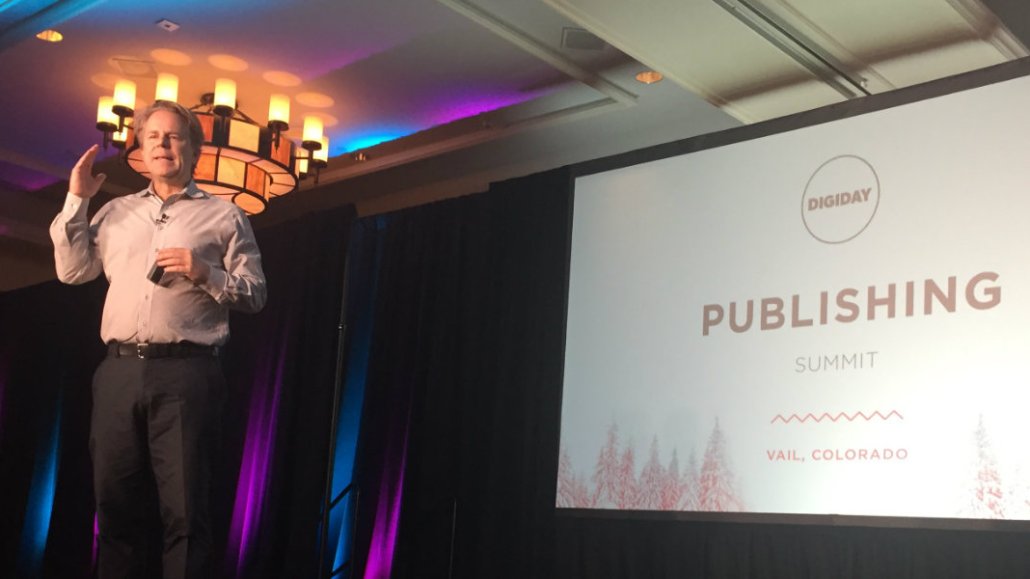 You couldn’t fault Justin Smith if he feels like taking a victory lap.

After warning publishers a year ago about being careful before they rushed head-first into platforms, the Bloomberg Media CEO came to this year’s Digital Publishing Summit in Vail, Colorado to demonstrate how damaging the duopoly can be. Smith cited a recent study from Digital Content Next, which disclosed how only 14 percent of some publishers’ revenues were coming from distributed content.

“What I argued last year was that there was not a clear, profitable business model for publishers by purely outsourcing your entire business to platforms,” Smith said. “In the first six months of 2016, we saw a number of companies begin to cut their costs and pull back as excitement over Instant Articles, Google AMP and other social products faded… There has been a significant shift in the confident and belief that working with platforms as your primary source of business value creation is what one should do.”

It’s not all doom and gloom, according to Smith, as he believes publishers still have a vital role to play as long as they prioritize their brands, differentiate their products and create revenue streams that are not reliant on Google and Facebook. Below are other excerpts from Smith’s session, lightly edited for clarity.

The digital revolution is just — finally — beginning:
“The digital revolution is still just beginning: 65 percent of total ad revenue is still in traditional. Secondly, the $25 billion that Facebook has is largely in direct response advertising. There is $250 billion dollars sitting in TV and print that has yet to move over to digital. Publishers with strong brands, great environments, great content and a long-lasting history in working with brand advertising partners stand a much better chance of winning a much larger share of that pie.”

Differentiate or die:
“Platforms have forced publishers to become commoditized because publishers have wanted to please the platform’s algorithms and there are producing the same type of content. If you’re producing content that someone else is also producing, you have to stop right away and rethink your approach. Create content that no one else is producing. It’s a high bar but if you do it well, you have a fundamental building block to becoming a must-read for your target audience.”

Quartz — which Smith oversaw at The Atlantic — is a model publisher by prioritizing its brand and eschewing programmatic:
“Quartz’s model from the beginning has been to never accept a banner ad or an IAB standard unit. Now the company is at a $30 million run rate and a $60 CPM, which is remarkable. If they had taken a different approach and adopted the standard IAB ad units, it would have been a race to the bottom and operating at single-digit CPMs, and they would not have any deep relationships with advertising clients.”

The advertiser brouhaha with Google is theater, but don’t take it lightly:
“I don’t think it’s a passing fad. If you look back at these eruptions that have happened every couple of months for a while now, the real story is why are these problems not getting resolved quickly enough? Is there a fundamental truth to being a neutral platform and having algorithms as your dominant source of content creation that will constantly create these issues? And as these explosions are getting more and more significant, advertisers are coming together [to fight back] and publishers are beginning to marshal their forces arguing for the quality of their environments. What we have not seen to date is an industry-wide effort among publishers, but these conversations are happening. It may take an even more dire circumstance for that to happen.”

Platforms are feeling the pressure:
“Platforms are realizing that great content is going to be the engine for much of their platform’s engagement. For the first time, we’re seeing concessions and flexibility and the beginnings of a more partner-like approach from platforms.”

Be pickier with platforms:
“At Bloomberg, we like to say we’ve established the most successful platform partnership that I know of, which has been with Twitter. We have taken a video feed from our TV channel and are airing three of our shows on Twitter. We’re seeing audience there, we are monetizing it and we are monetizing it together with Twitter in an equitable way. Our sales teams talk and work together. Can you imagine a relationship like that with Facebook and Google? Absolutely not.”

A Publisher’s Survival Guide for the Platform Era from Bloomberg Media
https://digiday.com/?p=229887
Most Read
Trending in
Digiday Top Stories