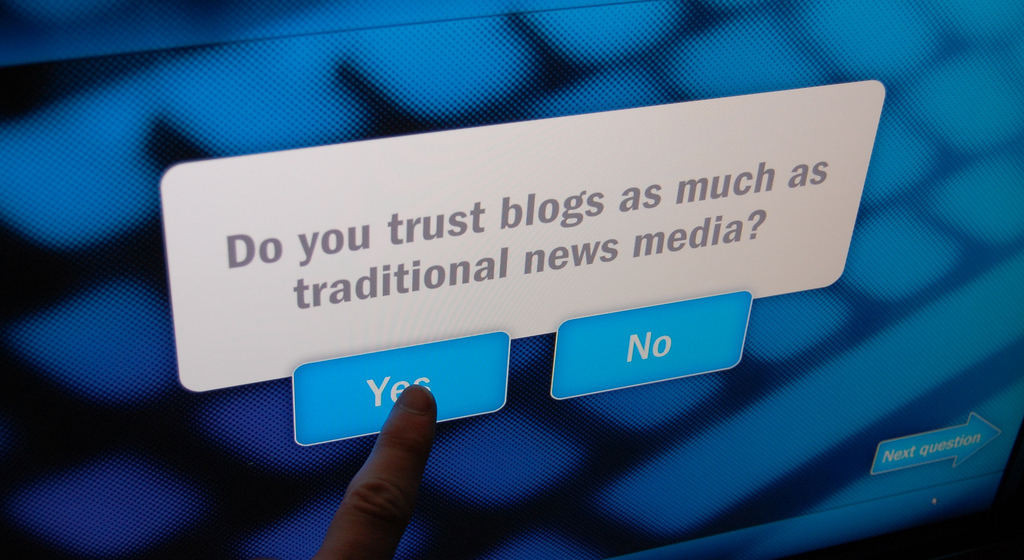 Blogger vs. Journalist: Is there a difference between bloggers and journalists? According to a federal judge in Oregon, there certainly is one: Bloggers are not protected by the states’ shield laws like journalists are. The judge ruled that blogger Crystal Cox must pay $2.5 million in damages to an investment group that she falsely accused of acting illegally and unethically on her blog. (Yikes, where in the world is a blogger going to come up with $2.5 million?) The judge explained that Cox could not claim protection under shield laws because she is not a journalist. Naturally, the Web has been buzzing in defense of bloggers and online freedom of speech; however, as Rebecca Rosen’s article in The Atlantic points out, the question of blogger or journalist is irrelevant in this particular case. Citing New York Times writer David Carr’s stance, as Rosen sees it:

She’s just a crazy lady with WordPress! We don’t need to protect her. But the reason we don’t need to protect Cox isn’t because she’s not a journalist. It’s because, as Carr describes, her information was bad. “None of it was ever proved,” he says. If she had indeed exposed criminal wrongdoing and the Judge had not protected her, we should be outraged. But that’s not the case.

The blogger vs. journalist debate will likely be a hot topic for some time to come, but in the case of Ms. Cox, it seems that’s not the issue. The Atlantic

Wiki Joins Protest: Wikipedia, everyone’s favorite online source of information on anything and everything, is joining the protest against SOPA and PIPA and will be blacking out on Jan. 18th (along with Reddit). Wikipedia co-founder Jimmy Wales announced the blackout plans on Twitter. Apparently, during the planned blackout, many site pages won’t be available or information about the protest will appear. The blackout is planned only for the English-language Wikipedia site. HuffPo

Murdoch Gets Slammed on Twitter: Unsurprisingly, Old Rupert is pro-SOPA and has been tweeting about it nonstop. Also unsurprisingly, he was met with a lot of hostile responses, like this tweet from @SAKlein21: “You are a liar and a disgrace to the news as a whole!” Well said. The Daily Dot

Video of the Day: Millennials. We can do anything! And we have no self-awareness or shame!

Tumblr of the Day: Faceobok is a Tumblr that features screenshots of all of the dumb pages and groups that people start.