The theory behind native advertising is that the more closely it resembles the editorial content surrounding it, the better it will perform.

To that end, publishers have variously created native ads that use the same templates as their articles, hired freelancers who can speak in the brand’s voice, or even enlisted their own editorial staffs to help produce the copy.

The Hollywood Reporter and Billboard have put a new twist on that theme. The music and entertainment trades are the latest publishers to create content on behalf of brands, and part of their selling proposition is that they can offer advertisers access to the same sorts of artists and musicians that the editorial side writes about.

“What sets us apart from everyone is our access,” said John Amato, co-president of the titles, which are part of Guggenheim Media’s Entertainment Group.

The titles have been doing increasingly collaborative ads for brands over the past year, and they formalized this approach with the creation of a branded content studio called Adapt Studios. “We started to ask, ‘How can we make a big impact on behalf of clients?’,” Amato said.

Leading the studio is Tye Comer, who in his previous role as editor of Billboard.com saw that Billboard could take advantage of the edit sides’ relationship with musicians to benefit the advertising side.

This approach is more suited to trades like Billboard and THR that focus on the business activities of the stars and executives they cover, rather than gossip about their personal lives.

“We’re reporting about their jobs rather than their lives,” Amato said. “It’s not so much about who they’re dating, as we’re a business trade.”

“We are talking to the biggest stars in entertainment every single day,” Comer added. “There’s a level of comfort artists have working with us.”

Some recent examples of native ads speak to this approach. Toshiba came to Billboard, wanting to promote its new Kirabook touchscreen laptop. Billboard chose artists including Jared Leto, Ellie Goulding and Matisyahu and created a video series called “On the Road” with them that prominently featured the laptop (as shown in Jared Leto video screenshot below). The videos were accompanied by profiles of the artists. Other than the fact that the series was labeled “Presented by Toshiba Kirabook,” it could have easily been taken for Billboard editorial content. 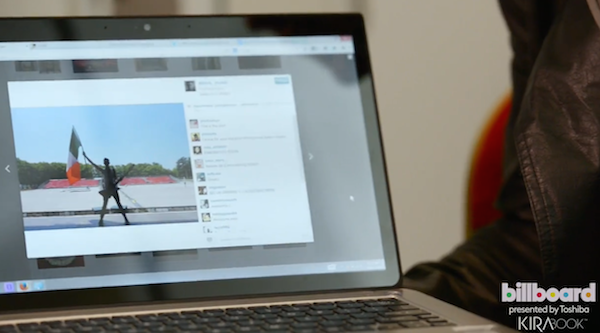 In a campaign for Mercedes’ Evolution Tour, a concert series, Billboard created music videos of musicians that were picked by the automaker. The videos were part of a hub that Billboard created and were also used by Mercedes to promote the tour.

Publishers have involved their editorial teams to varying degrees in creating native ads, although the practice isn’t without controversy as it violates the tradition of separating the editorial and business sides. Billboard/THR have used their editors to help generate ideas for prospective native ad clients, but the production is handled by the content studio with help from freelancers. Dan Strauss, general manager of digital at Billboard and THR, explained that editorial’s role is limited more because of bandwidth than church-and-state issues, though. “There are only so many hours in the day,” he said.

Rebecca Lieb, analyst at Altimeter, said that it makes sense for Billboard and THR to take advantage of their existing relationships with talent. “It’s always a complicated dance working with talent, but they can be very motivated to work with [the publication] because it gets them out front of the people who employ them,” she said. However, to avoid the potential for reader confusion, publisher need to adopt clear labeling practices, she said.

There are potential internal issues as well. When the ad and editorial sides are both talking to the same people, it’s easy to imagine the problems that could ensue. Both sides could end up approaching the same source for separate projects, which could result in confusion and turf battles. The success of an approach like this would seem to require ongoing communication.

Janice Min, co-president/chief creative officer of the titles, said one reason the branded content group doesn’t report to her is to avoid such issues. Strauss added that the titles are putting processes in place to make sure everyone is on the same page to avoid such problems.

“What’s fundamentally most important is, there’s transparent dialogue between both sides of the business,” he said. “We don’t want there to be awkwardness.”