Battle of the Digital Brands: NYT vs. WSJ 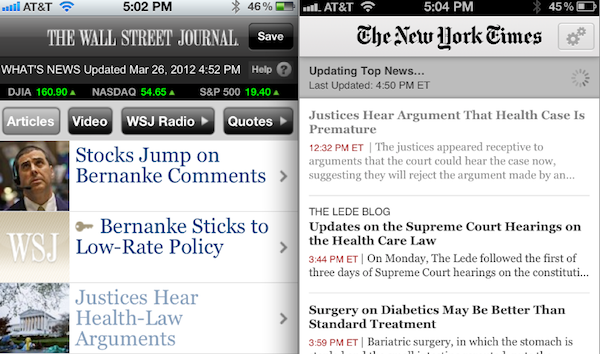 In this week’s installment of Battle of the Digital Brands, we take a look at two of the nation’s most influential news outlets: The New York Times and The Wall Street Journal.

We examined the presence of each brand’s main Facebook, Twitter, YouTube and mobile sites and apps. Our analysis goes beyond raw numbers — anyone can buy a bunch of Facebook fans — as we take a broad view of how these two media properties are represented in the digital world.

Which news outlet sits atop the digital world? Read on to find out.

New York Times:
Facebook: The Gray Lady greets its 2.1 million Facebook fans with a panoramic view of its multi-floored newsroom and takes visitors through its 160-year-old Timeline, highlighting news, events and images over the decades. The company has links to its photo gallery as well as upcoming (and previous) TimesTalks events. As a way to let readers through its porous paywall, the NYT posts links to articles that anyone can read. There’s plenty of interaction between reporters and staffers in the comments section of posts.

Twitter: The NYT feed has 4.7 million followers. Tweets these days are primarily links to breaking news, features and important stories from the publication. The feed has become a content dump. It was originally automated, but then was taken over by actual humans and now appears to be back to solely tweeting stories. There are no more @ replies, though there is the occasional retweet of an NYT reporter.

YouTube: There are 3,900 videos on the NYT YouTube channel, reaching its 69,000 followers — who have viewed the videos almost 45 million times. Tapping into its network of producers and editors, as well as reporters, each week videos are posted ranging from Business Day Live (an in-studio program about the day in business) to TimesCast (broad news of the day) to particular vertical channels (Sports, Politics, Style, Opinion). The company gives more insight into its coverage through the YouTube channel.

Mobile website: The NYT does not use a site redirect for its mobile site, meaning that users must enter http://mobile.nytimes.com into their phone’s browser to enter the site. At the very top of the mobile website is an ad, not the search functionality. Instead, the search functionality is buried right under the ad and is not very noticeable at all. Otherwise the layout of the site is very Times-esque. It is easy to read, and there are sharing opportunities within.

Mobile app: The NYT mobile app has no search functionality at all, which is a fail on the part of the publisher. Other than that, the app is very easy to use. Users can star their favorite stories to access easily later on and can share via email and Twitter. There is no option to share via Facebook though, which was a bit surprising.

The Wall Street Journal:
Facebook: Rupert Murdoch’s financial publication has 470,000 likes on Facebook and posts links to the website quite frequently. There are links to other WSJ Facebook pages, as well as shows the page owners who curate the site — a nice human touch for a newspaper. The paper has yet to incorporate a Timeline.

Twitter: There are 1.5 million followers of the WSJ on Twitter. Tweets are, like the NYT feed, links to WSJ articles and retweets of other WSJ-branded segments (Speakeasy, Washington Wire, DealJournal). No @ replies, either on the WSJ feed. I’m sensing a trend here.

YouTube: There are 17,000 subscribers who have watched the Journal’s 2,100 videos about 16 million times. This channel is branded as The Wall Street Journal Digital Network and incorporates videos from the company’s several outlets. Videos range in topics — from reporting on the Supreme Court’s hearing of the Affordable Health Care Act to Tim Tebow’s first press conference as a New York Jet.

Mobile app: The WSJ mobile app does not have a search functionality, but it does a good job of incorporating video, articles and WSJ Radio into the experience. The app loads quickly, and readers are able to share stories via email, Twitter and Facebook.

Conclusion:
Social
The newspapers show that traditional outlets can succeed in the digital world. Using these platforms to engage and inform their readers, both outlets excel at sharing information. On the connectivity side, each appears to rely more on its reporters to interact with their constituencies than the brand feeds. But since the NYT has cultivated its Facebook presence with a stunning Timeline, we give it the nod.

Mobile
The NYT is the clear winner here, with both a mobile website and an app. The WSJ’s lack of a mobile website is such a shock. Why not give consumers access to your content in any way they prefer to consume it?

Giselle Abramovich contributed to this article.