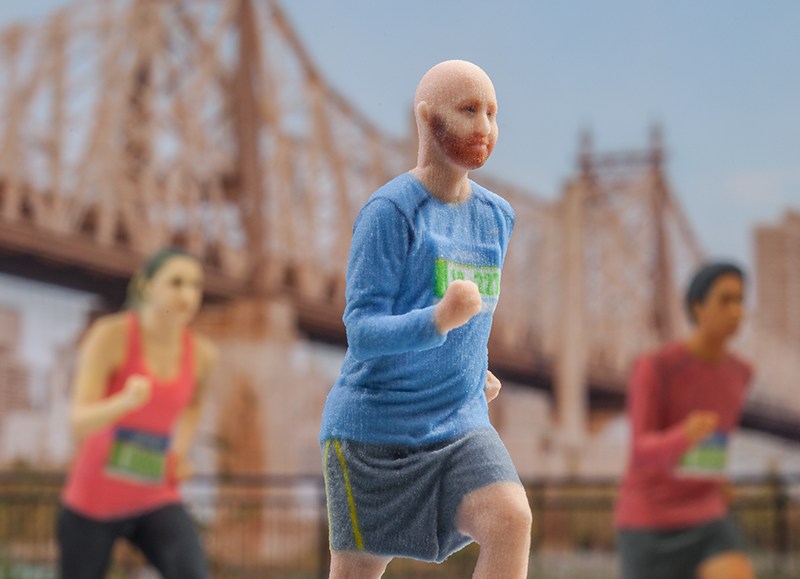 Marathon running is hard. And in America, when you do something hard you get a trophy. In that spirit, Asics is 3D printing 550 mini-statues of actual runners competing in this year’s TCS NYC Marathon as a way to commemorate their efforts.

The company wanted to do something fun for runners that also harnessed technology, said Shannon Scott, senior director of marketing communications and advertising at Asics America. After all with 50,000 runners, New York’s is the largest marathon in the world, something for racers to be proud of. Asics’ approach, despite the fact they’re only reaching roughly 1.1 percent of all runners with physical statues, is a novel attempt at personalization at scale.

The first-come-first-served effort launched with an email to registered runners, asking them to submit a personal photo to minimarathoner.com. From there each 2D image was converted into a 3-dimensional printable rendering by a team of 3D artists. This side-by-side image of Asics racer Andy Potts shows what a rendering looks like.

The brand set aside 500 statues for the first component of the campaign, and all of those were claimed by runners on the first day it was live. They’re saving 50 more for race day, which will be awarded to winners of a Twitter race.

Thanks to @AsicsAmerica for my own @nycmarathon #minimarathoner! Granted, she’s nowhere near as sweaty as I’ll be. pic.twitter.com/NLSquFcg4b

3D printing large quantities of anything in a short period of time is difficult, said Scott. Each statue takes about two days to print, and a multitude of printers were employed to get all the statues made in time for the big day.

“The technology involved in 3D printing is so cutting edge and refinements are being made every day,” said Scott. “But it is still a very involved process that makes these mini marathoners very special.”

After 42 days all 550 were complete, each standing about 4 inches tall. VITRO, the agency that developed the campaign, worked with a 3D printing company called NRI to accomplish the task.

To keep the buzz running, Asics will again ask marathoners opt-in to a system that automatically posts updates about their location as they pass certain points in the race. The technology is triggered by an RFID chip on the runner’s wrist and is only available to statue recipients. In the past Asics opened this service up to every racer, but those updates were text only.

“We wanted every interaction with Asics to feel special, and we didn’t feel like a text based [Facebook] update got there” a representative said. This year, racers’ friends and family will see a photo of the statue “running” through whatever location they just passed (example pictured below), specifically at mile 8 near the Brooklyn Bridge, mile 15 near the Queensboro bridge and mile 24 in Central Park.

On Twitter, where ASICS has more than 55 thousand followers, the brand is running a contest they’re calling “Tweet-athon mini-marathon.” Essentially, the 50 runners with the most Tweets including their handle and the hashtag “#minimarathoner” win a mini-statue of themselves. Of course, they have to enlist family and friends to Tweet on their behalf.

The brand is also running ads at the Time Warner Center and on double decker buses, and has an interactive display planned for Times Square, as part of a campaign they’re calling “We Are Marathoners”.

“[It] takes all of the thoughts and fun nuances that marathon runners can relate to and brings them to life visually,” said Scott.