First it was Tim Cook taking shots at ad-based companies like Google, whose business relies on ad-targeting consumers.

Then, it was Apple making it easier for people to block mobile ads on iOS9 while using the Safari browser.

Now comes the latest salvo: When users tap on an ad in Apple’s new mobile news app, they’re likely to see a message like these that ran in The Washington Post (left) and The Cut: 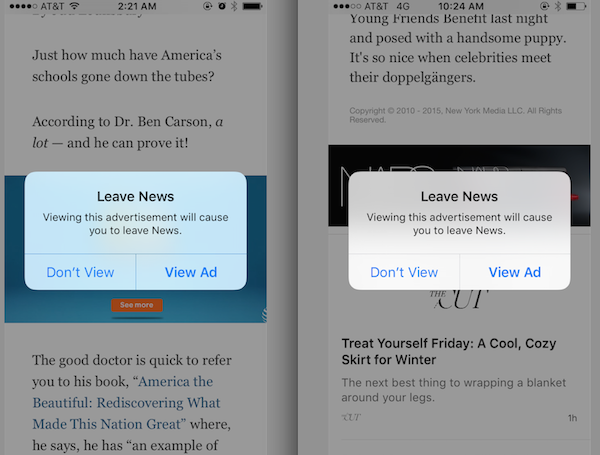 The messages don’t pop up on every ad; one publisher said they’re dictated by Apple policy. But helping people avoid clicking on ads isn’t likely to thrill advertisers, considering how hard it is to get people to click in the first place. Apple, in effect, is requiring double opt-in for users to click on ads. That’s a tall order.

Apple may be trying to cut down on the accidental finger taps that inflate mobile ad performance rates. One study found that fully 38 percent of taps on static banner ads were accidental. An Apple rep hasn’t responded to a request for comment.

The app puts Apple is in a funny position. It comes as Apple, along with other digital platforms including Google and Twitter, are battling for readers’ attention. And at a time when people are increasingly reading on mobile devices, that means making their experience as fast and streamlined as possible. In the backdrop is also a rise in the use of ad blocking software by Web surfers who are fed up with online ads that are annoying and bog down load time.

Facebook has its Instant Articles format where it gets publishers to post directly to its platform with the promise of faster-loading articles. Google and Twitter are partnering on a similar instant articles-project.

Apple has always ostensibly been about providing the best user experience, and it positions News as a way for consumers to get all their favorite news stories fast and in one place. But Apple’s business is primarily about selling products to people than ads, so it’s less incentivized to focus on serving advertisers.

Publishers from The Washington Post to Vox Media to CNN have been eager to jump aboard Apple News as a way to reach a new audience. They like that Apple is letting them keep 100 percent of the revenue if they sell ads in the articles themselves, and 70 percent if Apple sells the ads for them. But as they try to sell ads into the new platform, the pop-ups are a reminder that the click may not be the best way to measure mobile ads’ performance.