5 things brands should know about the Google-Twitter partnership 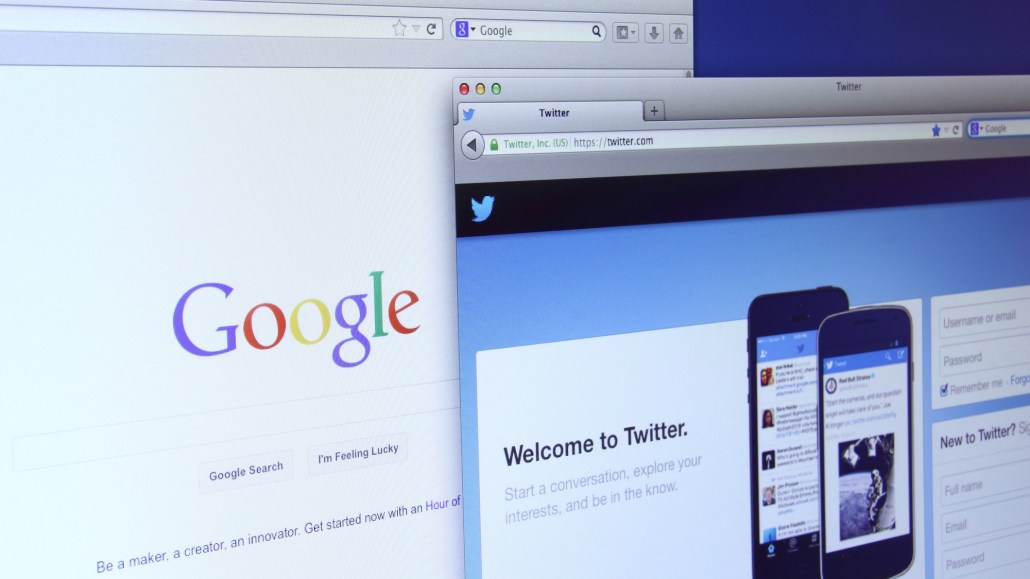 News that Google and Twitter agreed on Wednesday to show tweets in search results already has agency experts thinking about how they should alter their search and social strategies, and what implications it has for the platforms themselves.

Below are five things brands should know about the partnership. Google and Twitter declined requests for comment.

Real-time marketing becomes more important.
The new partnership between Google and Twitter will allow Google to display tweets in search results in real time sometime in the first half of this year, according to Bloomberg. Currently, there’s a lag between when a tweet is posted and when it becomes discoverable via Google search.

The real-time dimension of the partnership means that brands, specifically retailers, will see a greater benefit from real-time marketing on Twitter, said Steve Carbone, managing director and head of digital and analytics at media agency Mediacom. Consumers won’t need to be following a brand’s Twitter feed in order to discover a tweet about a limited-time offer or new product; those tweets will be readily accessible on Google’s search results pages, he said.

But it makes real-time Twitter marketing riskier.
But the partnership also extends that longevity of a tweet, meaning all those embarrassing, strained attempts to insert brands into the Zeitgeist will be more likely to haunt those brands in the future.

“A brand might come up with a clever tweet that will be interesting in that moment of cultural relevance, but it might not be the search result you want to come up for the next few months or years,” Jared Belsky, president at digital agency 360i, told Digiday. “What’s right right now for the brand might not be what you want representing your brand months down the road.”

Search and social need to be even more intertwined.
Belsky added that the move was merely the “the tip of the iceberg” for all the forthcoming changes in search marketing, namely that social will be play an increasingly large role in search marketing. “The search landscape now is a lot more complex with Pinterest, Facebook and real-time social content emerging as intent signals,” he said. “It won’t be a world dominated anymore by the three big engines [Bing, Google and Yahoo].”

Sean Muzzy, North American CEO at Neo@Ogilvy, Ogilvy’s performance marketing arm, agreed: “Discovery has been changing dramatically over the past couple of years. That’s really changed by the way people are using devices and the cross-device experience.”

More earned media on Twitter posts.
Regardless of whether it works for the brand, the partnership will undoubtedly increase the discoverability, and thus the earned media, of a given tweet, said Shreya Kushari, DigitasLBi’s North American search marketing svp. “The omnipresence of Google will absolutely help send traffic to Twitter,” she said.

That would be good news for Twitter CEO Dick Costolo, who has been crowing for a year about how Twitter’s cultural influence far exceeds its scale (or lack thereof relative to chief rival Facebook). Twitter has recently begun trying to monetize that influence by serving ads on other sites such as Flipboard and with Fabric, software that allows app developers to do the same.

The partnership does not involve an ad revenue agreement at this time, according to Bloomberg, but likely will in the future, Belsky said.

User acquisition.
But awareness is not Twitter’s most pressing problem; retaining users is. The platform is ubiquitous — tweets are featured on broadcasts and countless other websites, and Twitter’s signature features and vernacular (hashtags, for example) have become widely used cultural touchpoints.