5 charts and 2 tales: The divergent states of Snapchat and Twitter

Snapchat and Twitter are trending in opposite directions in the eyes of investors.

Last week, Snapchat’s IPO was speculated to have a $25 billion value. Meanwhile, Twitter’s bidders have backed off. “Twitter has not succeeded in monetizing the platform,” said media analyst Rebecca Lieb. “And Snapchat is the darling of the moment.”

But how did we get to this point? Here are five charts that show why Snapchat is sparking excitement while Twitter inspires indifference.

Ad revenue
Twitter is about twice as old as Snapchat and has been generating revenue far longer than the ephemeral communication app has. But eMarketer projects that Snapchat will quickly catch up. By 2018, it’s projected that Snapchat’s ad revenue will close within a billion dollars of Twitter’s ad revenue.

Jane Quigley, chief client officer at social media consultancy Converseon, said that part of the reason analysts are bullish on Snapchat advertising is because its ads are more seamless for users than Twitter’s. “Twitter’s brand experience has to get a lot better,” she said. “Right now, ads just show up that don’t add to the user experience. And they can be really intrusive.”

Altimeter Group analyst Brian Solis added that Snapchat has done a better job of “being careful of user experience and commanding a premium for advertising.”

Growth by demographics
A growing user base is usually attractive to investors. But for Snapchat, it’s where the growth comes from that’s particularly intriguing. Because advertisers hope that Snapchat will give them a way to reach the elusive millennial audience.

Time spent on platforms
Each platform uses different engagement metrics to drive their agenda. Which is why “engagement numbers are controversial at best,” Solis said.

Although people use Snapchat and Twitter in much different ways, one way to standardize engagement is to look at time spent on the platform. And by this metric, Snapchat performs better than Twitter at engaging both young and old audiences, according to comScore data.

While Snapchat’s engagement numbers and projected revenue and user growth are favorable compared to Twitter’s, Lieb points out that Snapchat’s advertising products are still quite young. 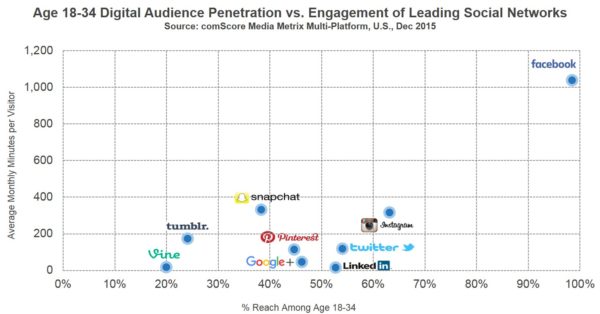 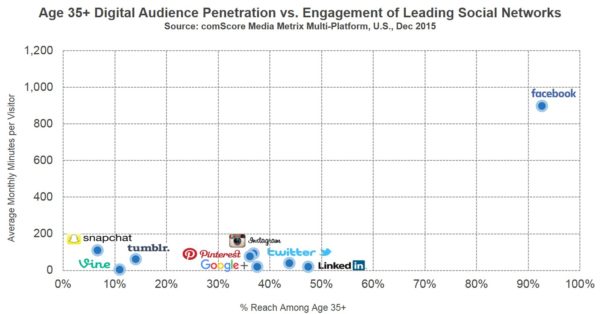