Writings on the wall: 10 more of the coolest agency murals

Earlier this month, we took a look at 10 of our favorite agency office murals. Turns out, people like looking at inspirational (or just plain cool) wall art. We were inundated with submissions from agencies that didn’t make the first round, so we figured it would only be fair to highlight some more of our favorites.

160over90
This Philadelphia-based agency may have outgrown its old offices, but it did not want to leave it completely behind when it moved across town. Which is why it set up a team of in-house designers to create a mural — a nod to both the past and the present — in its new digs. The mural is a visual depiction of Philadelphia, where the old meets the new. It takes signage from the historical city and replaces the copy from the signs with agency slang and expressions.

“The mural is emblematic of us as an agency and our maker culture,” said Stephen Penning, executive creative director and principal at 160over90. “So, for example, it has the ‘S’ symbol from the city’s public transportation system or SEPTA but with our own spin on it.”

Havas Chicago
Havas Chicago’s mural is done by popular local graffiti artist Sentrock, who is known for using bright colors and intense lettering and characters. Called “Hold On For Dear Life,” the mural features two wolves and seeks to inspire people to stay motivated and hungry.

“This mural isn’t just symbolic of how crazy agency life can be; its deeper meaning is rooted in our philosophy of having a disdain for the status quo in advertising and the agency’s role,” said Paul Marobella, CEO of Havas Worldwide Chicago. “The idea is that if you work here, we want ideas on how to meaningfully disrupt what it means to build brands. Plus, it’d make an insane chest tattoo for anyone brave enough.”

Team One
Steven Wilson, a U.K.-based artist known for his graffiti background and the use of innovative shapes and lines, created Team One’s mural. The artwork portrays a rocket soaring through space, symbolizing the agency’s free-flowing ideas.

Y&R
When Y&R moved from its old office at 285 Madison Avenue to New York City’s Columbus Circle in 2013, it commissioned three international artists to leave their marks. Artists Shantell Martin, Ever and Maya Hayuk each brought their unique visions of what creativity meant to them to three different floors at Y&R. Martin’s abstract black-and-white mural is the first thing visitors see when they walk through the lobby of the agency.

FCB
Spread across the three floors of FCB’s New York office — which includes FCB Health, FCB Garfinkel and FCB Worldwide — are various murals in FCB’s signature rainbow palette. They include images of a dog, King Kong hanging from an upside down Manhattan skyline and a set of fingers holding a dangling Godzilla. The palette is a representation of the flags from the countries which make up FCB’s network, while the visualizations are about being brave and seeing the world through your own lens. 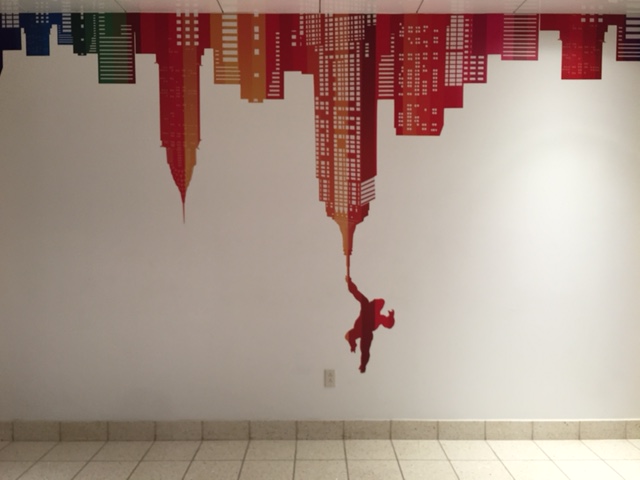 Hanson Inc.
This Ohio-based digital agency commissioned Detroit artist Shades to turn a section of its long central walkway into a graffiti mural when it moved into its space four years ago. While the artist created the agency’s name and logo in graffiti form, he also included the lips — his signature mark — but did them in a pixel style as a reference to the agency’s work in digital.

“We see the mural as an artistic expression of one of our core values: Be Yourself,” said Jenny Jacob, Hanson Inc.’s chief operating officer. “It’s energizing and fun — and our clients love it.”

Mullen Lowe
Mullen Lowe’s mural was created by artist Jon Sarkin back in 2009, around an older agency tagline called “Unbound.” While the agency may have moved away from that positioning, the mural still sits in its café area for all to see.

“It represents the uninhibited way in which we think and operate: No boundaries. No silos. Boundless creativity and collaboration,” said David Swaebe, svp of agency communications and business development at Mullen Lowe U.S.

72andSunny
For its 10 year anniversary in 2014, 72andSunny commissioned a piece by Los Angeles graffiti artist and writer Chaz Bojorquez. The giant piece hangs in the agency’s auditorium and includes the first and last names of everyone that was working at the company at the moment it was created.

Carmichael Lynch
This agency located in downtown Minneapolis was formerly a textile mill, and retains several stylistic elements of the mill — including lots of salvaged freight and fire doors. It also has a bunch of murals around the office, but one of them, located outside one of its conference rooms is a standout. Called “The Tank,” the piece is by local Minnesota-based artist Louis N. LaPierre, done on a circular concrete structure with exposed piping and a sliding metal door. It features drawings of several urban features like cars and factories.

StrawberryFrog
StrawberryFrog wanted to bring a new perspective to an industry that was overrun with big, corporate dinosaurs, something it condensed in the terms “Frogism.” The main tenets of Frogism are still visible in a mural in the reception area of its Madison Avenue office, including “Creating perpetual motion, one step at a time” and “Using your ingenuity to solve problems, not your size.”

“I always felt it was our most powerful idea as frogs challenging the big corporate dinosaurs, to do more with less,” said Karin Drakenberg, co-founder of StrawberryFrog.