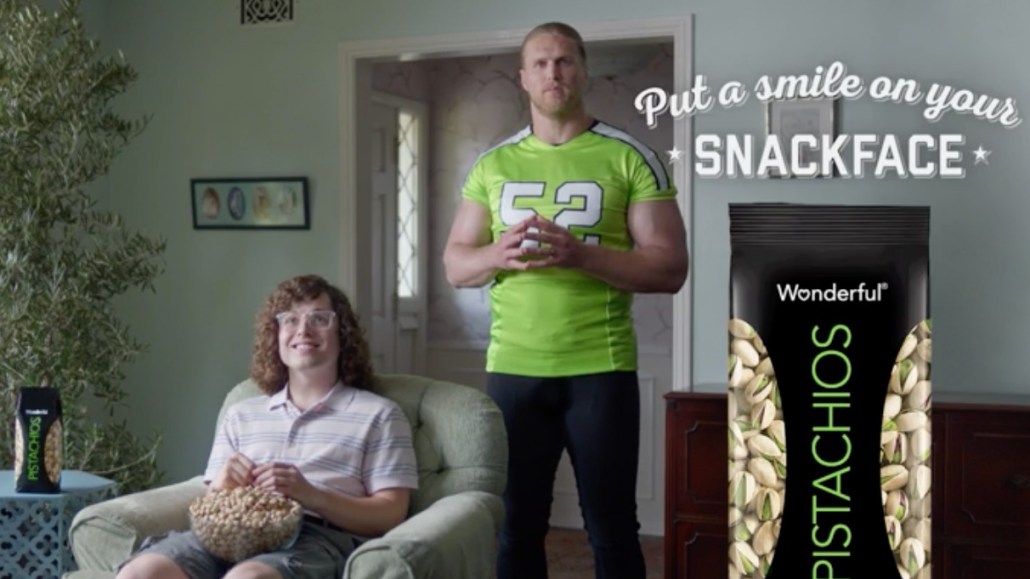 “Put a Smile in Your Snackface” is a series of short, darkly comedic spots for social and TV that feature Seattle Seahawks cornerback Richard Sherman and Green Bay Packers linebacker Clay Matthews describing people who are leading unfortunate lives, but can also manage smiles after eating Wonderful Pistachios. The spots are reminiscent of fellow NFL advertiser Skittles’ slightly uncomfortable spots. The campaign will last throughout the football season. (The brand would not say whether or not it’s spending for the Super Bowl this season.)

The $55 million campaign positions the snack brand to connect with NFL’s multicultural audience that loves snacking, but it also helps evolve the brand’s social strategy. Before, the brand mostly relied on its Ernie the Elephant mascot, voiced by WWE superstar John Cena, to drive social contests online. Now, more emphasis will be placed on speaking directly to sports fans.

This means the brand has to compete in a crowded category. Wonderful Pistachios is hoping a focus on the nutritional side of pistachios will make football fans reach for the nuts, rather than potato chips, pretzels or popcorn.

To do so, Wonderful Pistachios is hyper-targeting football and health enthusiasts for the first time using Facebook and YouTube data, platforms where the brand normally focuses its social efforts. Fifteen-second and 6-second spots will be paired with relevant football-related content and aimed at sports enthusiasts at the times they are most likely to respond.

It is also the first time Wonderful Pistachios is relaying its messaging in 6-second bumper videos on YouTube, believing, along with the platform, that shorter videos will likely hold the attention of today’s restless consumers, said Moran. Since the campaign revolves around the concept that pistachios can help spread cheer when things go wrong, the brand plans on joining conversations on social that reference disappointing parts of games. “Over the course of this season, we are prepared to react quickly to things that happen in real time, with the answer being, ‘Hey, maybe you should put a smile on your snackface,'” said Moran.

This campaign is part of the brand’s new approach to social in general. While the brand has more than 800,000 Facebook followers and 41,500 Twitter followers, it has moved away from what Andrés Conde, group director of digital at Wonderful Agency, calls a “follower strategy.” Instead of agonizing over the number of followers it has on social, Wonderful Pistachios is placing more emphasis on individual communication and customizing specific content for each platform. “We think we have a better opportunity to reach consumers where they are,” said Conde, “rather than trying to gather them into our own conversations.”