Why Merrill Lynch is Betting on Flipboard 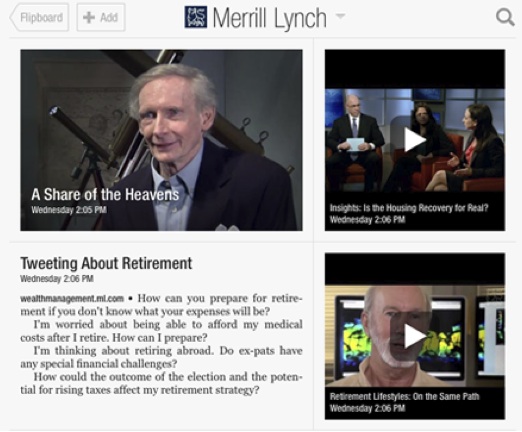 With content top of mind for brands these days, distribution is often overlooked. That’s not the case with Merrill Lynch, which claims it has content all figured out and is now focusing on ensuring it’s distributed at scale.

The company has been working hard over the last year to deliver what it considers compelling content to its clients and the overall investment community. Last year, it launched a Twitter page, which now has 28,000 followers, and the financial services brand regularly shares timely video content on YouTube and iTunes and conducts live webcasts on key topics throughout the year. It writes articles daily to share with its 120,000 followers on LinkedIn and has created customizable Web pages for most of the firm’s 17,500 financial advisers, as well as email tools that help them to curate tailored content to clients.

In a financial industry first, Merrill Lynch now has its own channel on Flipboard, the free mobile app that lets readers aggregate content of their choice to create their own current, newsy social magazine focused on issues most important to them. Flipboard reached 20 million active users at the end of August and claims it adds one new user every second.

“Our social strategy is to listen and get an understanding of what’s on our clients’ minds and what their sentiment is,” said Joe Corriero, head of digital marketing for Bank of America’s Global Wealth & Investment Management division, which includes Merrill Lynch. “Listening is an important component. It helps guide the content and info we create. Sharing for us is also important. Merrill Lynch has prided itself on its investment expertise for years, and we’re constantly on the prowl to find new ways to share that with people, and the social space is a great way to do that.”

Merrill Lynch is currently in its engagement phase in social media. The company has gotten the knack of what type of content it should be creating, so it’s now focusing its efforts on finding the right distribution mechanisms for it. Flipboard, according to Corriero, is a distribution channel Merrill Lynch hopes will introduce the brand to new audiences.

Another plus with Flipboard, Corriero said, is that it makes it easy for Merrill Lynch to go mobile. The app was originally created in 2010 for the iPad, but it is now available for iPhone and Android devices, as well.

“We live in a multichannel world, and we can’t control how and where people consume our content,” Corriero said. “Our strategy here is to be in as many channels and on as many platforms as possible so that people can experience our content wherever and whenever they’d prefer to. Think of Flipboard as just one more way to showcase our content.”

To get the word out about its channel on Flipboard, Merrill Lynch is running ads with content teasers within Forbes’ and The Atlantic’s Flipboard pages. When consumers tap on the ads they are taken to the Merrill Lynch Flipboard channel where they can subscribe. Merrill Lynch will judge the success of this effort mainly by the number of subscribers the channel gets and also the ways in which people engage with the content on Flipboard.

“It’s such a new space so a lot of it is experimenting in real time,” Corriero said. “How people consume the content will guide the content-creation process.”