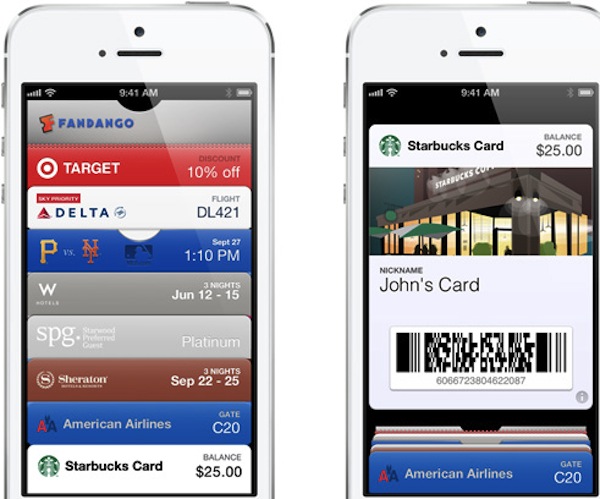 Your boarding passes, movie tickets, retail coupons and loyalty cards are now all in one place with Apple’s new operating system update. With Passbook, people can scan their iPhone or iPod touch to check in for a flight, get into a movie, and redeem a coupon. It’s Apple’s response to Google Wallet. Already big brands like Starbucks, Amex, Sephora and Target are embracing Passbook. Consumers are also embracing the technology. In the first day following iOS 6′s availability, Sephora’s Beauty Insider card was added to 17,000 users’ Passbooks. Twenty-four hours later, that number reached 20,000.

Google Wallet, many believe, is trying to solve a problem that doesn’t exist. By leaving out mobile payments, Apple’s Passbook hopes to be more useful. The app basically acts like a keeper of receipts, loyalty cards, and boarding passes from retailers’ existing apps. The fact that users can add apps from the retailers they know and trust makes it easier to spur adoption.

Starbucks: On Friday, Starbucks announced plans to support Passbook by the end of the month. Starbucks’ existing app lets users pay for their coffee, send gifts to friends and manage their Starbucks Card balance. The app accounted for 26 million transactions in 2011. There’s been speculation that the integration of Passbook would make things even simpler for users, with the app automatically opening up when a user walks into a Starbucks.

American Express: AmEx’s use of Passbook lets card members receive quick access to the information they use most – account activity, recent spending updates, purchase notifications, real-time account balances, and customer service information on their iPhone or iPod. This is an entirely new use-case for pass. Amex card members visit the account summary page online about 30 million times a month, so this is a functionality that will be very useful in Passbook, the company said.

Walgreens: Walgreens’ loyalty card Balance Rewards can be added to your Passbook. That means that instead of carrying around the actual physical card, users can store a virtual version of the card in Passbook. Users can select their nearest store, so that when they’re near it the phone automatically display the card.

Target: Target will let customers access its coupons via the Passbook app. Also, the app will load automatically when a person enters a Target store.

eBay’s StubHub: Passbook gives StubHub a tool to market secondary tickets to games and concerts. Currently, StubHub is only testing Passbook at the University of Texas and Purdue University football games.

With heavy hitters like these jumping aboard so quickly, Passbook shows promise of taking off. At this point, consumers have tons of apps on their phones and it could sometimes be difficult to find the one you’re looking for. Passbook makes it easy. Expect to see more brands embracing the technology in coming months.