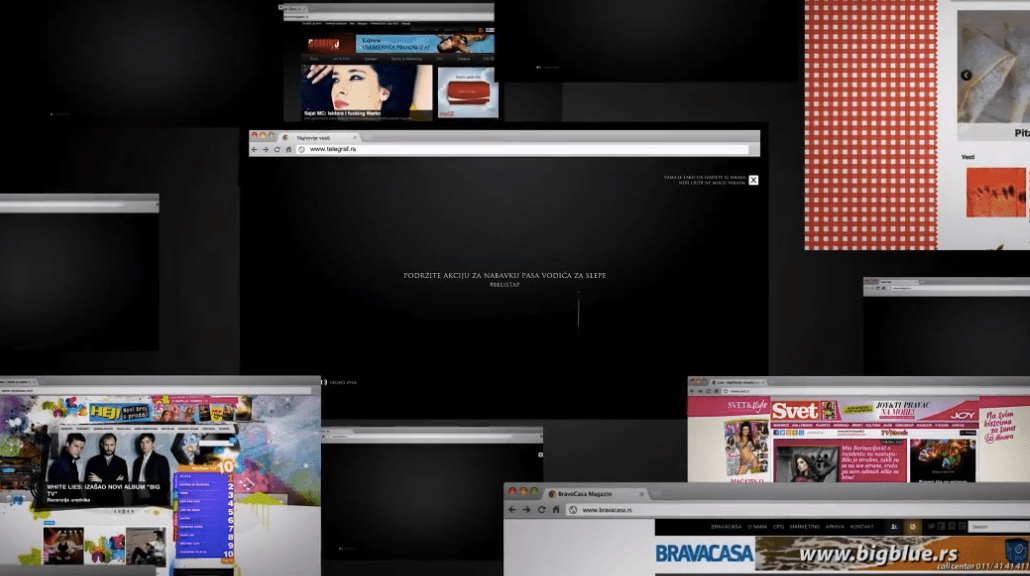 For the blind, learning how to navigate life without sight is obviously incredibly challenging. That’s why creatives at McCann Belgrade and MRM Belgrade took it upon themselves to create a clever, powerful pro-bono campaign for White Cane, a Serbian advocacy group that helps provide guide dogs for the visually impaired.

The campaign, called “Web Blackout,” featured completely black takeover banner ads that were set to create a synchronized Internet “blackout” on many major Web portals in Serbia. The idea was that site visitors could feel “blind” for one minute. The blackout takeover banners transformed the regular content on sites into a disorienting world of random sounds and speech. Site visitors’ cursors appeared as white canes that they could use to blindly tap around the blacked-out sites to experience only audio components of content, without any visuals. The banners linked back to the White Cane site in the hopes that more Serbians would become aware of the cause.

“When it comes to these kinds of projects, the first and main concern is always the budget; but this situation can always be altered with a great idea,” said Vladimir Ćosić, creative director at McCann Belgrade.

According to Ćosić, he and his team are pleased with the results of the campaign so far and have found the experience rewarding.

“The campaign is not finished yet, but so far, the results are great: The action was almost impossible to ignore, the click rate was unbelievable for our country, self-generated social media ideas came from the people, and for us, this was really mind blowing,” said Ćosić.

Watch video below to get a better sense of what the “Web blackout” looks likes.