What comes next: Lessons from Italy 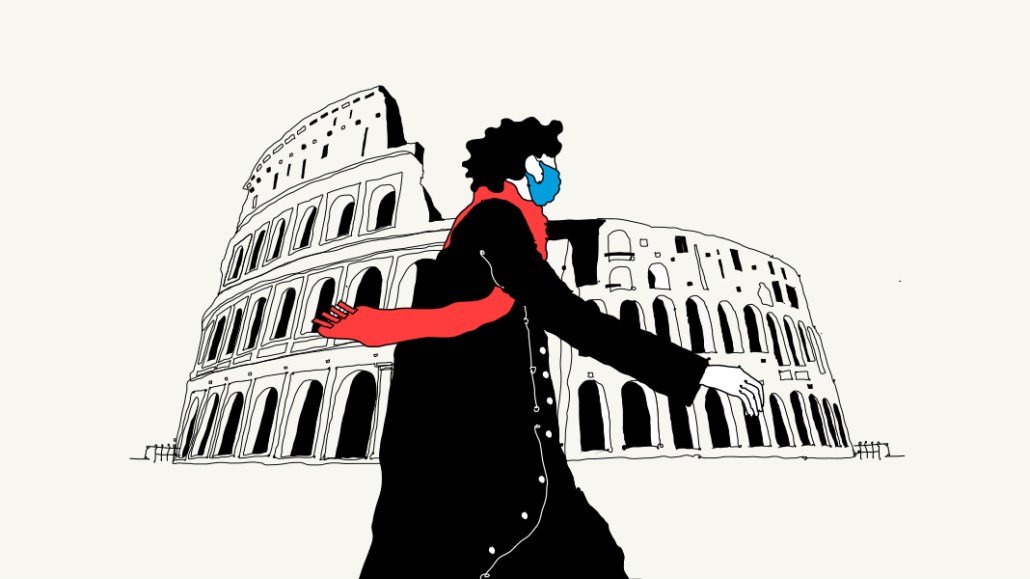 Having overtaken China as the epicenter for the coronavirus pandemic, Italy will serve as the canary in the coal mine for how other western media and advertising markets may fare as the crisis escalates worldwide.

Unsurprisingly, advertising executives said media consumption there — TV, social media, gaming — has spiked as the people of Italy roll into their fourth week of lockdown. The ad dollars, however, have not followed those eyeballs, as the overall Italian economy is being strangled.

During the first week of the national lockdown in March, TV viewing in Italy was up 31% during the daytime and total day, according to Brian Wieser, global president of business intelligence at GroupM. Overall, TV viewing is generally up around 30% in the markets most impacted by the coronavirus epidemic. In China during February, for example, weekly total day viewing was up by 30-40% each week over the prior year period, Wieser said. Daytime viewing was up between 45% and 60%.

Despite the spike in media time, ad spending in Italy is trending downward as the lockdown caused major cash flow issues at businesses across multiple sectors. One agency executive said they expect ad spending in Italy to take a 10% to 15% hit for the year — drawing from an average of different sources — but that May will be the key month to make more accurate forecasts. EMarketer had estimated in October 2019, before the coronavirus pandemic unfolded, that total ad spend in Italy would increase 0.9% to $10.1 billion this year.

Media owners in Italy have reacted to the drastic change in daily life with a series of promotions and extended free trials. Disney+ launched in Italy (and a number of other European countries) on Mar. 24, three months earlier than planned. Mediaset’s pay-TV service Infinity is offering two months of free access. Mediaset and public service broadcaster RAI have also set aside space for public service announcements, starring their channels’ biggest actors and celebrities, to remind viewers to stay at home and to keep their distance from others.

Advertisers are largely looking to shift their creative to be reactive to the unfolding situation. Some are even beginning to ask their agencies now about how their messaging should evolve for when the crisis begins to decelerate from the peak.

Elsewhere, Gruppo Mondadori is offering 50,000 magazine subscriptions for free, while Condé Nast is providing free digital copies of the latest editions of Vogue, Vanity Fair, GQ and Architectural Digest (an offer that also extends to Spain, France and Russia.)

Much of the online marketing creative has switched to being reactive, focusing on useful topics like cookery, home workouts and tutorials on how to avoid the virus. For example, Barilla, the world’s largest pasta producer, is showcasing twice-a-day live cooking shows on Instagram. Mini Italy, whose tagline before the pandemic was “#RechargeYourPassion,” has a new Instagram video series hosted by influencers who showcase their passions — from food, to yoga, and music — and how they can be practised inside the home. Ottavio Nava, the Milan-based joint CEO for Italy and Spain at We Are Social (Mini Italy and Barilla’s agency) said his company is largely focused on short-term and mid-term activity for clients at present.

Other brands are looking to evoke the national pride and solidarity that has been on display in viral videos over the past few weeks a citizens hung Italian flags from their windows and sung traditional songs in unison from their balconies. “This kind of tone is very appreciated,” said Giorgio Brenna, FCB Milan chief executive.

It’s “not always easy to work business as usual when the situation is everything but usual,” said Marta Di Girolamo, chief executive of creative agency Grey Italy, which has been deploying Microsoft Teams to keep its employees and the wider WPP group connected with its progress. The agency is also sharing data with clients on how consumer lifestyle and consumption habits are changing and is holding virtual workshops to help define short-term communication strategies that match the current consumer sentiment.

Traditional commercial shoots are, of course, prohibited given the strict government rules around social distancing at present. Agencies in Italy have been relying on image banks and, in the earlier throes of the pandemic, international offices and locations where it was still possible to shoot. We Are Social has been testing its “smart production” concept, where one of its producers has been shooting high-quality video from his home studio.

“It might be an interesting insight and trend that continues after this situation: how often we relied on traditional big productions, even when the answer may be something realized in a different context and with a different perspective,” said We Are Social’s Nava.

Some marketers in Italy are looking to postpone immediate media investments now with a view to investing more than usual in the second half of the year, when they hope the worst of this situation will be behind them, said FCB’s Brenna. Nobody has any answers as to when that might be, but Brenna is optimistic for when the day eventually comes.

“This is a time where clients that played a good role during the crisis will be in the best position after the crisis,” said Brenna. “[People will] want to do whatever they have not been able to do for months at home. They will spend more because they want to be alive again.”

Many Italians’ financial situations will be detrimentally affected by the crisis, with some having been furloughed or laid off from their jobs and with the wider economy facing a deep recession. But Brenna said the end of the coronavirus pandemic will feel like a “post-war period.” Right now, the situation is extremely fraught with hundreds of people dying from the virus each day and thousands of daily cases being recorded.

“If you have less money, it is not important,” he added. “You will be alive and then eventually hoping to be with all your family, alive, and that’s it.”