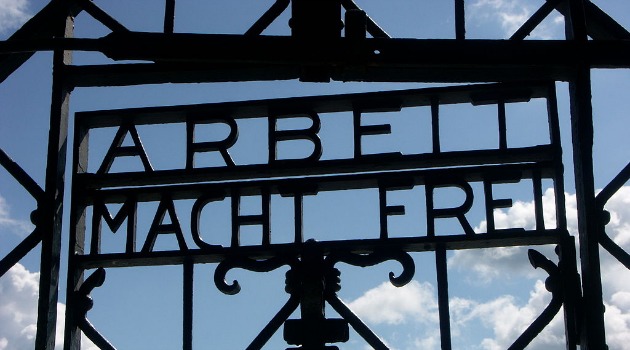 Walmart, Amazon and Sears came under social media fire from shoppers over the holiday weekend for selling a commemorative poster featuring a photo of one of Nazi Germany’s concentration camps.

Online shoppers were horrified to learn that an image from Dachau’s main gate was being sold as a piece of home decor. The offending item was listed on the Walmart page with the description: “Gate with inscription Arbeit Macht Frei, Dachau Concentration Camp, Dachau.” Walmart also promised that the poster “would make a great addition to your home or office.”

The slogan “Arbeit macht frei” is a sinister German expression favored by Nazis that translates to “work makes you free.”

The image shocked many and galvanized members of the Facebook group Grandchildren of Holocaust Survivors to complain.

Walmart, for its part, pulled the item and issued an apology and explanation: “We were horrified to see that this item was on our site. We sincerely apologize, and worked quickly to remove it. The item was sold through a third-party seller on our marketplace. We have shared our disappointment with them and have learned they are removing the publisher of this item entirely from inventory.”

The sign was similarly pulled from Amazon and Sears. Although Baltimore-based writer Jennifer Mendelsohn tweeted a screengrab of the Sears listing that, even more shockingly, came with a list of “similar items” to the sign, including double wall ovens.

Perhaps the only thing worse than @sears selling a Dachau sign? Check out the similar products. I can’t even. pic.twitter.com/16aiJiHxMm

Ovens were, of course, notoriously used to cremate the remains of thousands of slaughtered concentration camp prisoners at Dachau and elsewhere during World War II. While Sears has pulled the offending sign, it still sells more generic signs to the city of Dachau  that also include ovens as “similar items” in the product lising.

“The item, which was listed by an independent third-party on Sears Marketplace, violates our guidelines and was immediately removed,” a spokesman for the company wrote in an email to Digiday.

“Regarding the placement of the Sears products at the bottom of the Web page, those are special sale items that currently appear on millions of product pages. While clearly unintentional, we sincerely apologize for the proximity of the positioning.”

Retailers have been forced to walk an increasingly fine line when it comes to the selling of Nazi-related paraphernalia. Last year eBay came under fierce criticism after it was revealed to be profiting from the trade in Holocaust memorabilia, including the clothes of concentration camp victims.

The online auction house pulled the items after stoking international outrage, and ultimately refined and re-articulated its policies regarding the sale of World War II and other potentially offensive memorabilia.

For its part, Amazon sells the Adolf Hitler memoir “Mein Kampf,” which is arguably a historical document. More troubling, though, is that it also allows for the sale of Holocaust denial literature like “Did Six Million Really Die? The Truth At Last.”