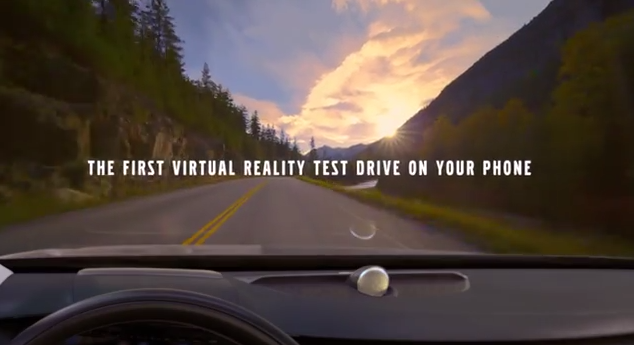 Move over Oculus Rift; make room for a cheaper and more portable virtual reality experience. Volvo yesterday became the first company to launch a VR campaign on Google Cardboard, a novelty piece of hardware that converts smartphones into functional VR headsets with nothing but cardboard, two lenses and a magnet.

Volvo Reality is the product of Volvo’s partnership with agency R/GA and VFX-studio Framestore and is the centerpiece of the campaign for the new SUV, the XC90, months before it hits the markets. It features a trio of experiential videos that incorporate a combination of photoreal CGI and a proprietary, 360-degree VR camera technique.

“We have seen the XC90 be very well received since it was announced, and we wanted to keep that excitement alive until it hits the dealerships,” Bodil Eriksson, the executive vice president of product, brand, marketing and communications at Volvo Cars North America, told Digiday. “The Google Cardboard is accessible, portable, unfussy, fun and personal — a great way to reach people.”

Users can take the virtual test drive for themselves at the Los Angeles Auto show starting November 21, or even request a Volvo-branded Google Cardboard kit after downloading the Volvo Reality app, currently only on Google Play– but out on the App store soon. Don’t have a kit? Grab any pizza or packing box and follow the online instructions for folding it into Google Cardboard. Slide your phone in and share your experiences with the hashtag #VolvoReality.

The app experience plops viewers into an XC90, where they can get a feel for being in the car — and taking it on the road. The trilogy of virtual reality videos includes “Friday Getaway,” which begins in an open field, then taking the users for a drive through the mountains, ending by a lakeside at the end of the day.

Virtual reality is having a bit of a moment in marketing land: HBO and Marriott both recently rolled out Oculus Rift campaigns. Lexus tapped the device to provide test-drives a few months ago.

“Virtual Reality is becoming the new way of creating content and storytelling,” said Will Turnage, the senior vice president of technology at R/GA. “As the core technology continues to evolve, it is an avenue that will grow by leaps and bounds.”

Now, with Google Cardboard, the VR experience becomes much more accessible to the average Joe.

“Pretty much everybody has a smart-phone in their pockets,” David Mellor, the director at Framestore, told Digiday. “The quality is at par with that of Oculus Rift, the only barrier is sometimes the resolution of the images and videos on phones.”