Twitter is making it easier to direct message brands

Today, Twitter is making it easier for brands to initiate a direct message when private information is needed, say a record locator or a credit card number, with a new button within a tweet that directly opens a direct message. That makes it easier to keep track of the conversation and making the app easier to use to those not intimately familiar with the tabs.

Twitter said in a statement that handling customer’s problems through direct messages leads to increased brand loyalty and even sales. People who have their issues resolved through direct messages are willing to pay companies more in the future because of the convenience, according to research from social media managing tool Sparkcentral. Also, it’s always nice not have to pick up a phone and talk with a human.

Here’s what the new button looks like in action:

The button has been slowly rolling out in the wild, with Delta Air Lines, Alaska Airlines, Hyatt and Starbucks among the first to trial it. 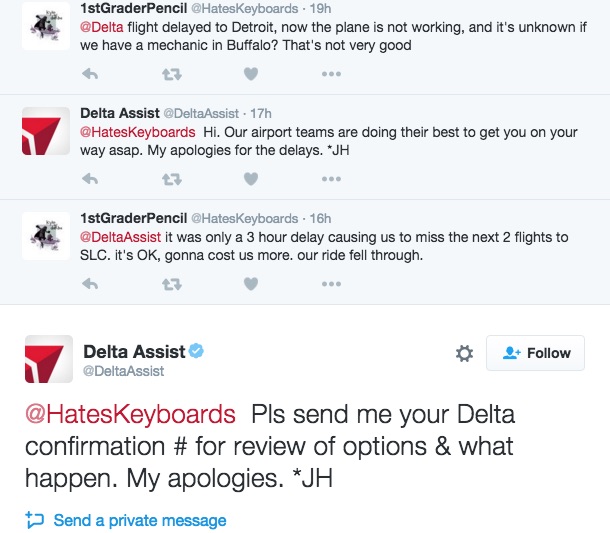 Ideally this will cut down on people publicly tweeting their record locators, which is a privacy nightmare for airlines.