Bevel: Building a Brand from Scratch

At age 15 when Tristan Walker first tried shaving, he woke up the next morning with a fresh crop of zits — every teenager’s worst nightmare — and  figured razors were the plague. His next try at shaving was at the barbershop with electric clippers, but they were the same clippers used for cutting hair and were pretty harsh on his face. He even tried depilatory cream once, but the chemicals were strong and left discoloration on his skin. That’s why, when Tristan Walker set out to launch his own company, he came up with Bevel.

Bevel is a shaving-products brand specially designed for black men and their specific skin and facial hair needs. Walker came up with the idea for Bevel when he realized his own perennial shaving woes — razor burn, ingrown hairs, breaking out — were actually quite common problems for black men.  And no one else was addressing the issue. Walker’s familiarity with the problems that his brand and its products are trying to solve, he hopes, will give Bevel an authenticity — and ultimately a loyal customer base — that all brands crave.

From Foursquare to facial hair
Tristan Walker, if you don’t already know the story, is the guy who got hired at Foursquare because he wouldn’t stop hounding the founders Dennis Crowley and Naveen Selvadurai via email back in 2009.

“At the time, it was just me and Dennis at a desk in the East Village, but this one kid kept emailing us with great ideas and kept pestering us, so eventually we said, yeah, just come hang out with us in New York, and eventually it became more formalized,” said Selvadurai of Walker, who would become head of business development at Foursquare. “He has this energy — he has this combination of enthusiasm and hustle and this curiosity to really want to do something really great.”

Walker decided to leave Foursquare after three years because, as he explained it, he felt he’d done all he could do for the company — he helped get hundreds of thousands of merchants using the platform and scored a big partnership with American Express — and that business team was “in a really good place.” It was time to start something of his own — he just didn’t know what yet.

Walker, who grew up in Queens, New York, knew he wanted to be an entrepreneur since he was 5 years old, and thanks to his time at Stanford business school, he later realized he wanted to specifically be a Silicon Valley entrepreneur. After his time at Foursquare, Walker went on to VC firm Andreesen Horowitz where he spent about nine months as the entrepreneur in residence trying figure out what kind of company he wanted to start.

“I spent the first seven months there wasting my time really,” he told Digiday. “I wanted to do these ambitious things like build a bank or fix childhood obesity, but then I realized I wasn’t going to be the best person to solve those problems. I reflected back on the entrepreneurs who inspired me, and they all brought a unique authenticity to the problems they were trying to solve. ”

For Walker, the problem he realized he could solve that was authentic to him involved the health and beauty needs of the under-served black community. The anecdote Walker likes to share about how he came up with the idea for his company Walker and Company and its flagship brand Bevel is that he grew tired of having to walk to the pathetic “ethnic aisle,” which was really more of a shelf, to find a small selection of dusty products with a picture of, as he describes it, “the 58-year-old , bald black dude in a towel.”

Walker’s mission for Walker and Company and its brands is to make personal care and beauty simple and accessible to people of color. As he told Digiday (and Forbes and AllthingsD), “the second-class-citizen experience needs to go.” For the Bevel brand specifically, Walker was inspired by his own shaving disasters and realized there are no shaving products specifically for black men’s curly facial hair — and there isn’t much grooming instruction tailored to black men.

Just 29, Walker raised $2.4 million in funding from backers last May including Andreessen Horowitz, SV Angel, Sherpa Ventures, Collaborative Fund, Charles King and none other than Nas. Walker, after hiring a team of seven, spent the next six months of research and development to create the perfect priming oil, shaving cream, restoring balm and double-edge safety razors (multi-blade razors, which are more common and popular, are actually too harsh and cause razor burn and ingrown hairs for coarse, curly facial hair). Just this past December, he made the Bevel shaving kit available online for pre-order on a subscription-based model. For $59, customers get a Bevel starter kit and after that, for $29.95 a month, refill shipments every 90 days. Subscribers can pause or stop shipments at any time.

Authenticity — and etiquette
While Walker has experience helping build a social media platform, creating a CPG brand is a whole new beast. Walker and his team recognize the most challenging part of building a brand from scratch is creating that consumer awareness, trust and then eventually advocacy. The hope is to start building that trust through storytelling online via social and creating interesting and informative content for the Bevel lifestyle site Bevel Etiquette. 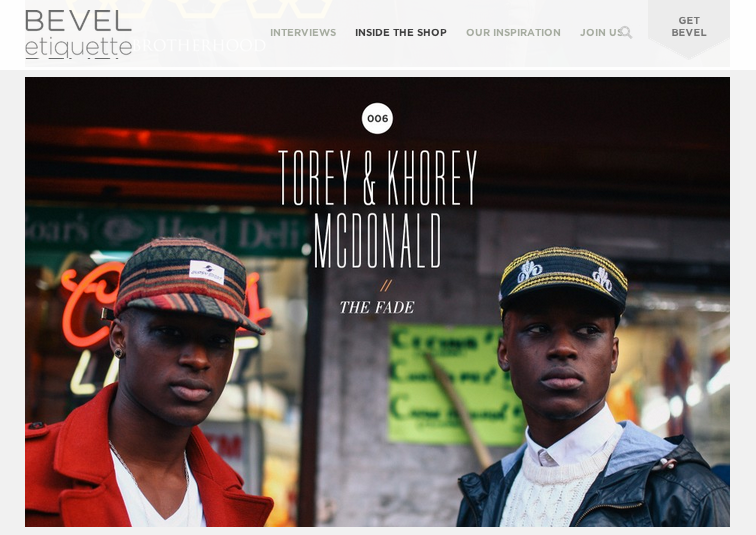 “We aren’t going to be successful if we only develop products that work — we have to tell a story that’s authentic and real, and the story is coming from someone who suffered from the same shaving problems for years,” said Walker. “There’s no availability of information about male grooming for people of color online, so I knew very early on that we needed to provide that service, so Bevel Etiquette was born.”

Bevel Etiquette is a sleek site that features articles and photographs about things like the resurgence of the fade haircut with opinions from different local barbershops, cool sneaker labels, interviews with stylish dudes and how-to pieces on things like clipper cleaning. As Walker sees it, it is a “portal for men to understand the latest and greatest on grooming and style.”

Bevel has set up shop on all of the usual social media platforms — Facebook, Twitter, Instagram, Tumblr and YouTube — to push out Bevel Etiquette content, visual content and create conversations about men’s grooming and style. Bevel’s follower numbers are in the single-digit thousands at this point, but it’s still pretty early in the game. The first shipment of Bevel products are just going out next week.

But just because you build it, doesn’t mean they will come, and no one is more aware of that than Walker.

“I learned a lot from Foursquare, and there are a lot of similarities between what Foursquare did early on and what we are doing,” he said. “We bled Foursquare blue, and that allowed our users to love the brand and led to people evangelizing it. It’s not an overnight thing, but we are committed, and we think it will work.”

To the critics who think that hawking black men’s shaving products is too niche for long-term, widespread success — or even the few daft stone-throwers who claim Walker is pulling the race card (take a look at the comments section of the AllThingsD story) — Walker thinks they are just plain silly.

“Bevel is not our last brand — we have a mission to build a bunch of brands that solve important issues in the community, so should I pull the race card?” asked Walker. “Sure, as long as we are solving issues that no one else is solving.”