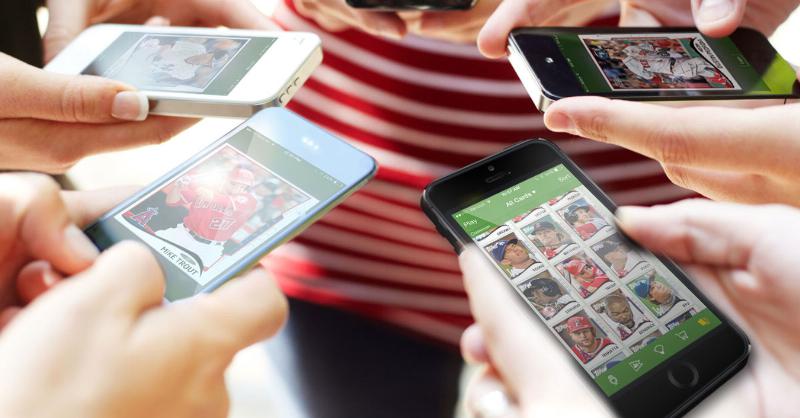 Baseball cards seem like one of those cultural touchstones destined to become a vestige of the past. With stats and photos on every baseball player from any era now instantly available via smartphones, it’s hard to imagine young baseball fans today handing over cash for stacks of cards.

Don’t tell that to Topps. Defying conventional wisdom, the iconic baseball-card publisher has created a healthy digital business by recreating the act of buying and trading baseball cards on smartphones. The company has released three sports-cards apps in the last 15 months, one of which has been ranked in the top 100 highest-grossing iPhone apps every day for nearly three months straight.

If the idea of teenagers collecting and swapping digital baseball cards is confounding to you, then Topps’ general manager of digital Michael Bramlage shares your sense of surprise.

“When we started the whole thing, we had the same skepticism. We even double- and triple-checked the data,” Bramlage said. “Teens and young adults are really doing this, and in some cases, they’re spending real money to do this.”

That is, they’re downloading Topps’ apps for free, then paying for virtual currency that can be subsequently redeemed for packs of digital cards. More than 50 million digital packs of cards, in fact, with prices per pack ranging from a nickel to $20.

And they’re doing it at a rate of nearly four times the industry average. Topps has more than 1 million users across its three apps — “BUNT”  for Major League Baseball (MLB), “KICK” for Premier League soccer and “Huddle” for the National Football League — with 5.5 percent of its users making in-app purchases each month. Mobile ad tech firm Swrve released a report this February that found only 1.5 percent of mobile game players made an in-app purchase in a given month.

The largest Topps app in terms of both users and revenue is BUNT, which has been amid the 100 highest grossing iPhone apps for the entire MLB season, thus far, according to app analytics company App Annie. As an indication of how much the trading cards industry shrunk, Topps competitor Fleer was bought by baseball card company Upper Deck for a paltry $6.1 million in 2005. Upper Deck is still in business selling cards, but that appears to be all its doing; Upper Deck sells physical cards on its site, but does not have any digital versions.

The key to Topps’ success, according to Bramlage, was discovering how to translate all of the things he and his colleagues loved about physical baseball cards to the digital world — particularly discovery. Bramlage said that, as a child, he loved the thrill of opening a new pack of cards, not knowing what was inside. Trading cards among a friend was a sport in itself. “That’s how you learn to negotiate,” he said. “That’s how you learned the art of the deal. That’s how you learned to find suckers in the schoolyard.” And there was a sweet set of accomplishment in “completing a set,” owning cards for every player on a given team or in a given group.

These actions are still cherished among the niche of die-hard card hobbyists, and the physical card industry has become more high-end in recent years, Bramlage said.

At first, Bramlage wasn’t sure to how to replicate the experience on a smartphone. Then, he and his team realized “gamification” — using game mechanics such as points, badges and competition to entice users to use or pay for a digital service — is the driving force for some of the largest digital media companies in existence: LinkedIn entices users to complete their profiles and make connections by telling them they’ll reach “All-Star” status at a certain point. On Twitter, users obsess over their follower counts, with some even paying to promote their own accounts just to accumulate more. Foursquare’s initial popularity was largely due to rewarding people for checking in with badges.

Bramlage and his team were also surprised by the results of a 2011 Carnegie Mellon University study that found today’s teenagers ascribe as much, and sometimes more, value to digital items than they do physical ones.

“We said, ‘This is totally ready for the digital world,” Bramlage said.

Now, 15 months after first launching BUNT for iPhones, Topps has a BUNT app for Android and is seeing its user numbers increase while the percentage of users who make in-app purchases remains steady.

“It shows us this digital collecting phenomenon is not something reserved to a niche-y group of early adopters,” Bramlage said. “We only made cardboard two years ago, and now we make software. And it’s been good enough to put us in the same company as a number of big name developers.”