Tito’s Vodka not only lines the shelves of every hip bar, it’s also all over its fans’ social media feeds.

While the brand dabbles in social marketing and branded content, the bulk of what it does on Twitter and Facebook is rooted in customer service and engagement — and has been from day one.

“We’ve almost gone about it backwards,” said Nicole Portwood, vp of brand marketing at Tito’s Vodka. “When we started using social, it was because we viewed it as a customer service tool. We only started using it as a publishing tool recently.”

Social media is particularly important as a customer service tool for the brand. The brand not only receives 80 percent of its customer service queries on social, but also uses it as a means of connecting with bartenders, mixologists and distributors across the country. When Boston-based Henrietta’s Table shared a cocktail recipe containing Tito’s, for example, the social team made sure it retweeted it.

“It’s about speaking to all of them individually,” said Katy Gelhausen, web and social media coordinator at Tito’s. “Today, it’s second nature for customers to treat a brand as they do a friend on social, so it’s important for us to be on top of that.” 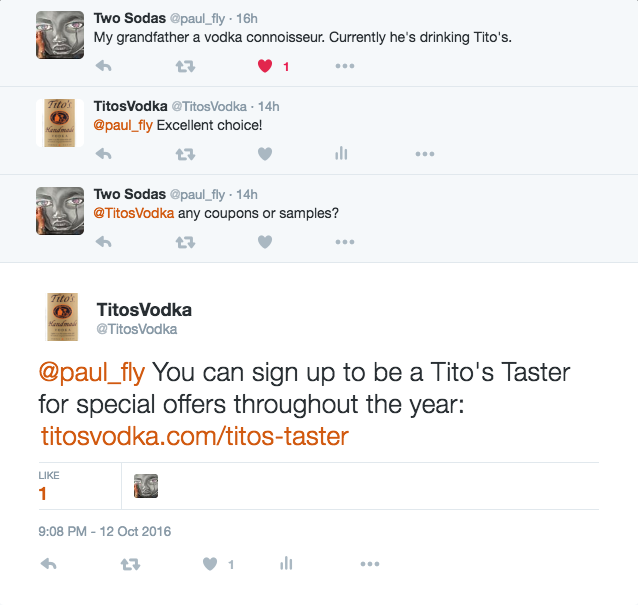 Despite its small team, Tito’s has found a way to streamline its social customer service process. The brand uses a platform called Sprout Social to keep tabs on trends, develop a consistent voice and create a dialogue with its audience.

It uses the platform’s “Smart Inbox” feature, for instance, to organize all incoming comments in one centralized spot. Meanwhile, the platform’s “Conversation History” feature allows its team to quickly get up to speed with previous interactions with a customer and kick off a conversation from where it was left off. It can also track conversations around the brand around several parameters, including hashtags, sentiment and relevant topics like cocktails or vodka.

“We get at least 10 queries an hour, which adds up to hundreds a day,” said Gelhausen. “These features have really helped us increase our response rate and ensure that we don’t miss any conversation around the brand, even if we’re not tagged directly.”

Tito’s has also been using social keywords and its customer interactions to inform other marketing initiatives. It uses Sprout’s “brand keywords” to monitor industry trends and cocktail flavor profiles, and develop quarterly cocktail recipes which are then developed and distributed through its various marketing channels. The most recent cocktail recipe, for example, was the brand’s own spin on a Moscow Mule, and was inspired by its fans talking about all things fall.

Since Tito’s ushered in these changes, said Portwood, it has seen a 22 percent improvement in response time over the past year. According to data crunched by social analytics firm Unmetric, Tito’s responds to more than 55 percent of all its tweets within an hour, and a majority of them within a day. That is a better rate than a lot of its bigger competitors, including Grey Goose, Absolut and Belvedere. Twitter’s responsiveness has also contributed to its follower growth, with its Twitter community growing organically by 46 percent in the past four months.

An array of brands are turning to automated chatbots to cater to their customer service needs, but Tito’s will steer clear for now. In the days before social media, Tito’s built its brand through old-fashioned word of mouth, with its founder, Bert “Tito” Beveridge, personally spearheading the efforts. According to Gelhausen, relying on a bot would erode the brand’s affinity among its fans.

“Being human and approachable is what makes us authentic,” she said. “Besides, it wouldn’t really be natural for a bot to use emojis.”