The Thousand Dollar Shave Society wants you to make a baby

There are bros, and then there are men. And thoughtful men take their manly responsibilities seriously. Like shaving. And making babies. 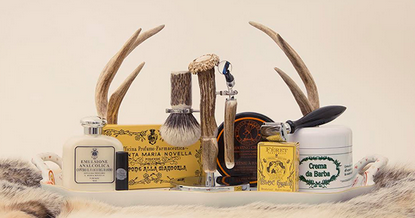 The “Thousand Dollar Shave Society” itself is no joke. The brand is a high-end alternative to subscription-based services like the Dollar Shave Club and other mainstream razor companies. Created by ex-banker Kirby Allison in conjunction with his luxury wooden hanger brand the “Hanger Project” last September, it is aimed at men with a penchant for the finer things in life: tailored suits, art, Scotch in a crystal glass and shaving tools made of stag antlers. The brand’s latest campaign with agency Innocean USA is an outlandish bid for dudes to man up, shave down and spread some seed.

The “Make a Baby on Purpose” campaign asks men “who realize the importance of making a life-long commitment” to try to accurately predict the day their yet-to-be conceived child will be born — comically juxtaposing the “art of shaving” with the act of making babies. Because, apparently, dudes who use ordinary razors instead of stag-antler razors are unprepared for fatherhood.

“Comparing shaving to making babies is absurd but bold — it adds comic value and takes it to the next level. It’s a fun way to engage people, even if they are not actually buying the kit,” Allison told Digiday. 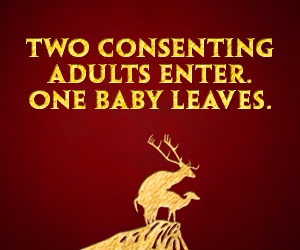 The manly men who wish to participate can go to the microsite BabyOnPurpose.com for a chance to win a majestic “mounting of the stag” trophy and, of course, bragging rights for life. They don’t have to necessarily make the $1,000 purchase (which gets you a $245 shaving kit and $755 “Stag Antler Shaving Mug”). The challenge began on Valentine’s Day and runs through Mother’s Day 2015. Winners will be announced in May 2016.

The competition is an extension of a digital spot that the company launched in September 2014, to initiate a conversation about men who do things deliberately and thoughtfully. According to Allison, there has been a 200 percent increase in the Hanger Project’s newsletter subscriptions, a 15 percent year-over-year sales increase in the shaving category and a 35 percent increase in the Hanger Project’s Web traffic since the launch of Thousand Dollar Shave Society. In the new campaign, the brand is also advertising online and on radio, and promoting the hashtag #MakeABabyOnPurpose socially.

“Dadvertising” has been in vogue lately. Cheerios made dads cool last year by presenting them as efficient multitaskers in its “How To Dad” campaign. From Toyota to Dove, dads were also celebrated by brands in this year’s Super Bowl commercials.

“This is for the man who takes responsibility and takes himself seriously, and there’s nothing more serious than bringing a baby into the world,” Allison said. “But it’s also important for us to convey that we don’t take ourselves too seriously.”