‘There’s a momentum to it’: The Kanye West guide to social media 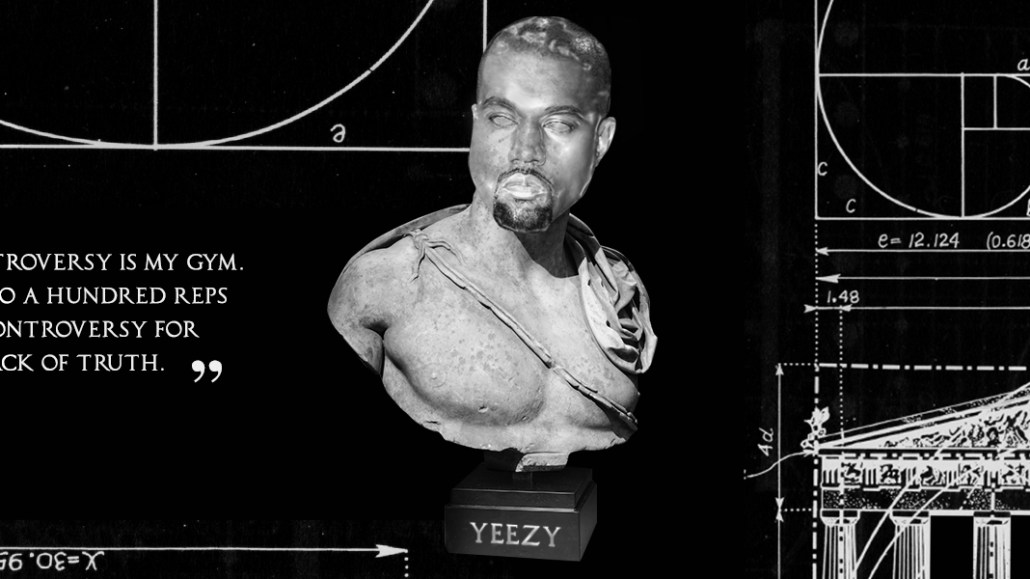 When Kanye West tweets, the likes come immediately. The legendary rapper, producer and designer has gained incredible power on the platform since he rejoined it on April 13 after leaving in May 2017. In just four days, West added more than 500,000 followers to his account and is now approaching 10 million. Of course, it helps to be a celebrity, and West is far from the only celebrity to abandon and then return to the platform. In the last year, we’ve seen Ariana Grande and Elton John tweet again.

“It’s not like people are like, ‘Yeah he’s back,’ [and that’s it.] People are getting more enthusiastic about Kanye’s content. There’s a momentum to it,” said Lara Cohen, Twitter’s global head of partner solutions.

While there can only be one Kanye, marketers can learn from West’s social media strategy that lets him dominate the online conversation and inspire a community.

Choose platforms that resonate with your audience
West doesn’t personally engage with every social platform. He was once a frequent Instagram user, but he deleted his account in May 2017 along with disabling his Twitter account. He doesn’t have an official Facebook page or a verified Snapchat account. Now, he’s focusing his efforts on Twitter and proving that brands don’t need to be everywhere. On Twitter, West follows exactly one person: Kim Kardashian West, his wife.

David Herrmann, director of advertising at Social Outlier, said the majority of his clients demand investments in each platform, but he personally would advise against it.

West’s “audience isn’t on Facebook,” Herrmann said. “You can go granular like Kanye is doing to have the maximum impact.”

Be authentic
West’s focus on Twitter aligns with his personal brand as a self-proclaimed genius and thought leader. While he may have taken a break from social media, he’s never quit self-promotion.

“Kanye uses social media exactly for what it was intended for: to transparently connect with his core fans without a buffer,” said Aldin Jackson, director of marketing and culture at Rostrum Records.

Marketers may not necessarily want to always preach the gospel of their brand, but a purpose of social media is to share what you know. You wouldn’t see Kanye tweeting about khaki cargo shorts — unless to say he hates them. Share posts from people who can authentically speak to your brand, like West recently did with this video of Lauryn Hill.

Focus on your objectives
West is a busy person. He manages a record label and runs a fashion line, and he’s releasing new music soon. He also has two daughters and a son. Yet he’s able to take advantage of social media to further his goals to be a good father, husband and businessman (in music, fashion and entrepreneurship, such as with Donda.)

For West, social media is a place to spread love to his family. Even though he deleted his Instagram account, he brought it back on Valentine’s Day and posted a photo of himself and his wife.

West also promotes his work. When he released his latest album, “The Life of Pablo,” he tweeted that it would only be available on Tidal, and the streaming service soon became the most downloaded app in the Apple App Store. He also solely used Twitter to announce his pop-up store back in March 2016 and recently tweeted his new album’s release date.

Marketers should consider their overall business objectives and how their social media profiles can help achieve or at least help with each of those. West gets people to listen to his music and buy his merch. What do you want people to do for you?

Show your passion
It’s clear in West’s tweets that he wants to share his personal thoughts (as a real-time book), no matter whether they’re about being a successful artist or contemplating what an “original hoodie” is:

There are millions of accounts someone could follow online, and they can spend their time with a bunch of different social platforms. In order to make that connection, there must be some type of passion behind it.

“I truly believe he thinks with his heart,” said Rostrum Records’ Jackson.

Of course, being too passionate can get brands into trouble. It’s always good to be cautious and think before you tweet, but like we see with West, don’t let it hold you back. Consider the impact a tweet or another type of social media post will have: Are you simply seeking likes, or are you trying to start a conversation?