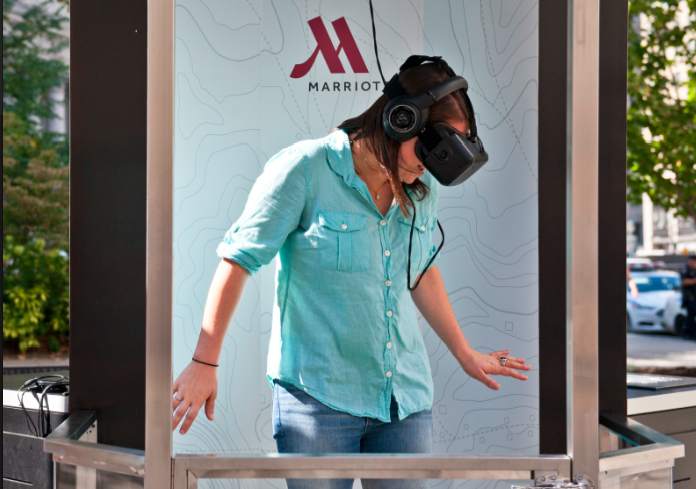 Want to take a quick vacation to the sandy beaches of Hawaii or downtown London, all without leaving town? Marriott Hotels can teleport you there in all of three minutes, right from its hotel lobby. Marriott today became the first hotel brand to step into the world of virtual reality with #GetTeleported, a partnership with experiential marketing agency Relevent and Oscar-winning VFX studio Framestore.

To take you there, Marriott invites the curious to step into its traveling teleporter, a phone booth-like glass structure that features the Oculus Rift DK2 virtual reality headset and wireless headphones. A suite of onboard 4-D sensory elements such as heat, wind and mist augment the experience. HBO had curated a similar experience earlier this year for fans of its series Game of Thrones.

The teleporter is truly immersive, kicking off with a virtual stroll through one of the new Marriott Greatroom lobbies. The tour stops at a map which beams the viewer through a tunnel of light, landing the traveler at a black sand beach in Maui. Users are treated to 360-degree live action video mixed with real computer-generated imagery that makes it an almost-real experience.

The next stop takes users through the tunnel again and perches them on top of a skyscraper in downtown London, with a panoramic view of the city. The entire experience is naturally shareable on Facebook and Twitter with the hashtag #GetTeleported.

“We’re really looking to get people excited about the future of travel and push it beyond the four walls of the hotel,” Michael Dail, vp of global brand marketing at Marriott Hotels, told Digiday. “This is destination sampling that is going to inspire you to take a trip to where you’d like to go, but also make you think about how new technology can create such experiences, enhancing travel beyond the physical.”

“The greater the immersion, the better the story,” Ian Cleary, the creative director at Relevent, added.

Of course, use of the medium itself also makes for a great advertisement for the brand. James McQuivey, vp, principal analyst at Forrester, said that the use of the technology is a nice first-mover “marketing gimmick, designed to get the company maximum attention before this kind of thing becomes common enough that it won’t be worth doing. Some people may even go out of their way to experience the promotion, but the company is really looking for social media chatter more than a radical overhaul of the consumer travel experience.” The #GetTeleported hashtag has been used 92 times today according to Topsy. #GetTeleported will be traveling to eight other cities across the U.S. including Boston, Washington D.C., Atlanta, Dallas, Los Angeles, San Francisco and San Jose over the next few weeks to drum up attention.

This is, however, not the first time that Marriott Hotels has used technology in in new ways for its marketing. With “Travel Brilliantly” last year, the hotel chain launched mobile check-in and checkout options and offered up portable charger-cubes with multiple chords. Marriott has also partnered with students at the MIT Mobile Experience Lab to create a social hub at its hotel lobbies, which is a mobile app that connects people with similar backgrounds and interests.

“Hotels traditionally have been very formulaic or have been very cookie-cutter,” Dail said. “We are going to have hotels that are very customized, that are coming up with all these innovative solutions.”

Its competitors are not far behind, though. Hyatt has been focusing a lot on revamping its social strategy to drive engagement, and Four Seasons has always tried to formulate an integrated social and digital strategy as with last year’s “Pin-pack-go” on Pinterest.

According to Dail, Marriott’s Travel Brilliantly site has had over 1.5 million visitors so far, this year, about 2,000 ideas contributed and over 10,000 votes for the ideas. He said that Marriott had also boosted its followers on social media, which number at nearly 1.5 million followers on its Facebook page and about 141,000 followers on its Twitter handle. He also said that there was a “double digit” increase in the number of people that considered Marriott as a first choice preference.