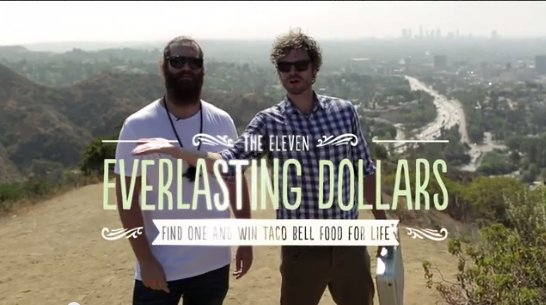 Taco Bell has brought its own version of Willy Wonka’s golden tickets to life.

In a real-life viral effort to promote the 11 items on its new Dollar Cravings Menu, the fast food giant has noted down the serial numbers of and then released 11-dollar bills across the country—which if found, guarantee its finder a lifetime of food from Taco Bell.

The campaign, in partnership with agency Deutsch, kicked off in Los Angeles today, and will have a new “everlasting dollar” and associated serial number being announced in a new city everyday for the next 11 days.

“Social doesn’t just thrive online, we wanted to create a buzz offline too,” said Nick Tran, the digital marketing and social media lead at Taco Bell. “We always strive to do things different from the expected.”

Taco Bell will announce the city and winning serial number by releasing a video every day on its webpage.  The videos will also be released on other social media channels including Twitter, Facebook, Snapchat, Vine and YouTube—which the brand will monitor for social engagement. The videos feature Harley Morenstein from Epic Meal Time, a Canadian cooking show on YouTube that features extremely high-calorie meals.

Taco Bell is no stranger to pulling out all the stops in its attempts to reach its elusive young demographic. It was an early adopter of Snapchat, created the “fourth meal” ad campaign and has developed a multifaceted digital content strategy.