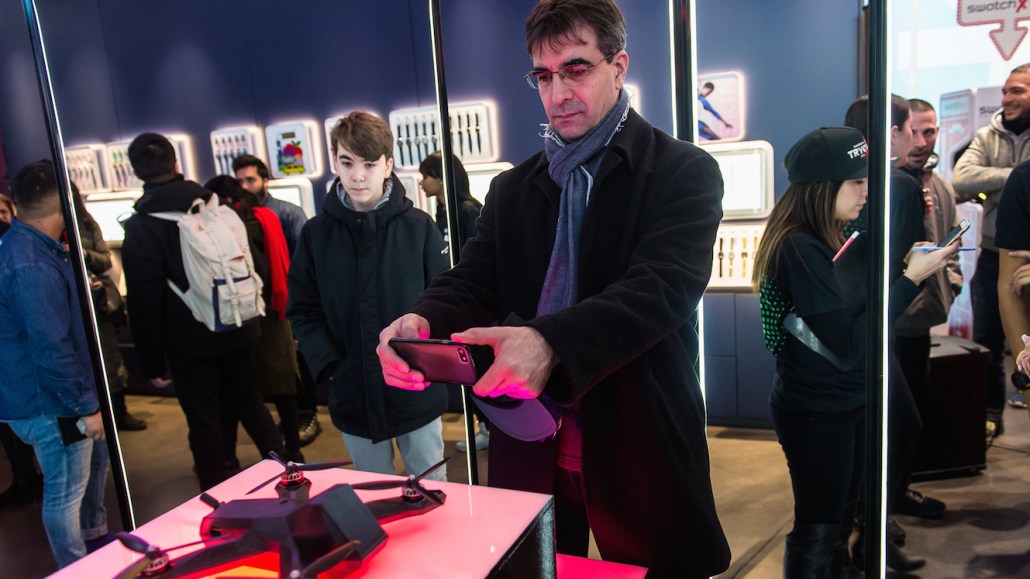 The event was a viewing party for the 2018 Swatch DRL tryouts, where 24 drone video-game racers competed for a chance to be sponsored and receive a $75,000 professional racing contract from the watch maker. The winner, Brodie “Robogenesis” Springer, will race in the 2018 DRL Allianz World Championship Season, which Swatch became an official partner of in June 2017.

For Swatch, the sponsorship and partnership is an avenue into the increasingly popular world of esports and way to grow the brand’s cross-platform marketing. In esports, video gamers compete in tournaments that are often livestreamed online, on TV or live in stadiums.

In 2018, DRL, or the Drone Racing League, plans to host seven races, all of which will include Swatch branding. The races will be livestreamed on social media channels like YouTube and DRL’s website and broadcast across 75 countries on TV channels such as ESPN, Sky Sports and Disney XD, said Nicholas Horbaczewki, CEO and founder of DRL. The content will also live on iTunes.

Swatch is expecting a large viewership. Horbaczewki said that in 2017, 55 million people worldwide watched the inaugural DRL World Championship Season on TV while 100 million watched online, numbers he expects to increase in 2018.

Esports originated in South Korea in the early 2000s and has gained an international following with the help of streaming platforms like Twitch. Esports brought in 385 million viewers online in 2017, and is expected to grow to 589 million viewers by 2020, according to Newzoo’s 2017 Global eSports Market Report.

Brand dollars are following the audience. According to Newzoo, marketers spent $484 million in 2017 in esports, including media rights, advertising and sponsorships. By 2020, that number is estimated to grow to $1.2 billion.

Drone racing is the latest esports vertical to take off. When Horbaczewki first launched DRL in 2015, drone racing was already becoming popular in countries outside the U.S. “I wanted to bring this underground sport to a global audience,” he said. “For Swatch to partner with such a new sport, it really says something about its potential.”

Carlo Giordanetti, creative director of Swatch, wouldn’t give the cost of the partnership with DRL but said that it was a multiyear partnership that will last at least three years and that Swatch may sponsor future racers based on the audience response.

The drone-racing audience is one that Swatch cannot reach elsewhere and stands out from other sports fans because of their embrace of new technology and sports, according to Giordanetti.

Throughout the Championship races, Swatch plans to use the racers as influencers, sharing their stories, especially those of its sponsored racer Brodie Springer on its social media channels, said Giordanetti.

Swatch will likely also bring some racers into its stores, as it already does with around a dozen other athletes, said Giordanetti.

“If you are able to make a connection between a brand and a person you admire,” said Giordanetti, “you get involved in the brand in a more personal way.”