What a $5 million Super Bowl ad can buy you in digital media (tl;dr: a lot)

Every year, marketing pundit-types ask themselves the question: “Is the Super Bowl worth it?” And when the price tag is $5 million for 30-seconds of airtime, it’s a pretty good question — especially when you begin wondering what you can get for that money in digital.

Turns out, a lot. On social media and on websites, $5 million can cover, in some cases, your entire budget for the year. We asked ad buyers and platforms what $5 million could get us in lieu of a 30-second TV spot.

One caveat: You may be able to buy more media online, but for every sponsored moment and promoted pin, you’re competing against all the other digital media noise out there. Despite the crazy price tag, it can be argued that in the age of digital, the Super Bowl is actually worth more since it’s one time people can definitively say that their ad was watched.

Be that as it may, here’s what else you could have banged for that same buck. 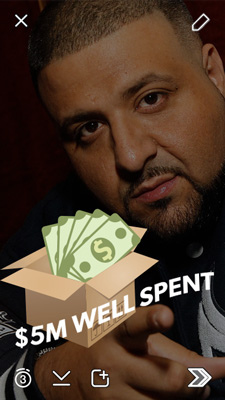 Snapchat lenses for a week
At $700,000 a day, you could get up to a week’s worth of Snapchat’s sponsored lenses. The photo-sharing platform charges at a minimum 2 cents-a-view on video ads on Discover, so at a $20 CPM, that’s 250 million impressions.

Take over NYTimes.com for more than two weeks
Ad buyers say it costs about $300,000 to take over the homepage of the New York Times’ website for a day. For $5 million, you’d get 16 days of whatever content you want, maybe even Barney and a dumpster fire. You’d reach roughly half of its 70.3 million monthly uniques, per comScore.

2.63 billion display ad impressions
Display ads currently sell for $1.90 per thousand impressions (CPM) in the U.S., according to email marketing company Monetize Pro. So $5 million would get you 2.63 billion impressions. 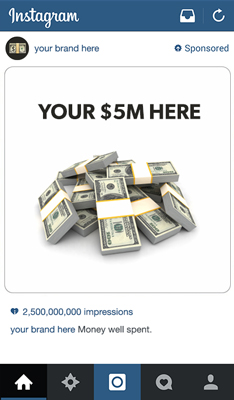 Influencers
A sponsored tweet from a high-profile celebrity or athlete every week for an entire year, including a license to use the content from that post across other social mediums. But you could also get partnership deals with NBA stars like Russell Westbrook, Draymond Green or Anthony Davis, according to Stein.

A year’s worth of content for a small brand
Global media network Cycle could produce 20 videos between 60 and 90 seconds; 50 short, 15 second videos; 50 microvideos like Vines or GIFs; 500 photos that could reach potentially 1 billion impressions. (Cycle would also throw in distribution of that content and a measurement study to see how well the content did.)

An agency
One media executive said that for $5 million, he would be able to add about 40 junior staffers to a brand’s account.