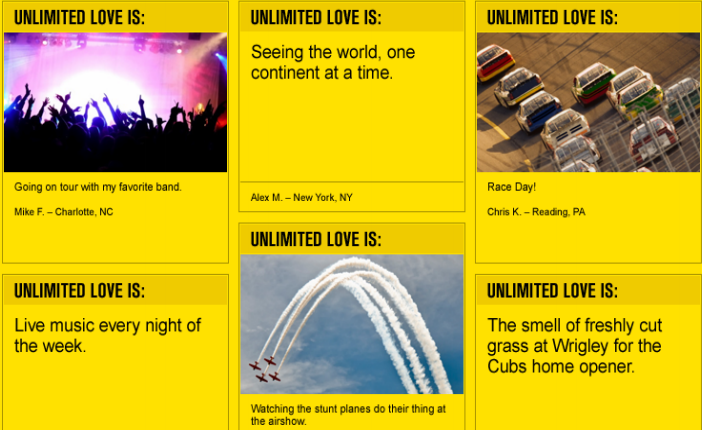 Sprint is interacting with consumers in Twitter via a Times Square billboard. Using the theme of “Unlimited Love Unlimited Evo,” the campaign is meant to build buzz around the new HTC Evo 4G LTE. The cross-platform campaign was created in partnership with Team Sprint — agencies Digitas and Leo Burnett.

Sprint’s new campaign for its HTC Evo 4G LTE cell phone is centered on a digital billboard located in Times Square, which encourages visitors to tweet #evolove to @sprint with what they love. Select Tweets will receive a direct response, with the board detailing where in New York the object of their love can be found. For example, if someone Tweeted his love for art, Sprint might tweet back about the current exhibits at the Museum of Modern Art in New York, displaying the location of, and walking directions to, MoMa on the phone’s map in Times Square, Dave Marsey, group director of media for Digitas, explained.

“Our marketing platform was tapping into the love that consumers have for the device,” he added. “It’s building that high-profile spectacle of engagement with the brand around unlimited love.”

Another notable aspect of the campaign is a Facebook contest that asks fans, “What do you love the most? Tell us, and you could win an experience of a lifetime from Sprint.” This could include access to movies or concerts for a year, for example, if the winner is into movies or music, respectively. In addition to the grand prize, 40 runners-up will win new devices.

Within the Sprint page, there is a section entitled, “Win what you love,” where fans have posted such things as “deep-sea fishing,” “jogging with my dog” and “hot-air ballooning in the south of France.” Fans’ comments are displayed in a montage on the site.

“We’re really tapping into two things: the fact that Sprint is the only national carrier with truly unlimited data, and we know that customers are passionate about the device, so it’s combining those elements with unlimited love,” said Marsey.

The purpose of the screens, he added, is to take advantage of real-time interaction with the brand. Additionally, consumers can view the features of the new phone (including the unlimited data plan, eight-megapixel camera and a music component supported through Beats audio), which are highlighted by the various campaign aspects.

“The ability to use social in support of this is a unique way to reinforce that Sprint has an unlimited benefit and demonstrate the wealth and value of love that consumers have for EVO. Joining the two in social is something we believe in, but the ability to demonstrate that in an engaging and interactive way in Times Square brings the concept to life, and Facebook carries it on for those who aren’t in New York.”

The campaign is too new for Marsey to have metrics on the results, but he did note that the pre-order activity for the phone — as well as the engagement on Facebook — is currently above the expected norm.