Bra-cams and other great creative from around the world 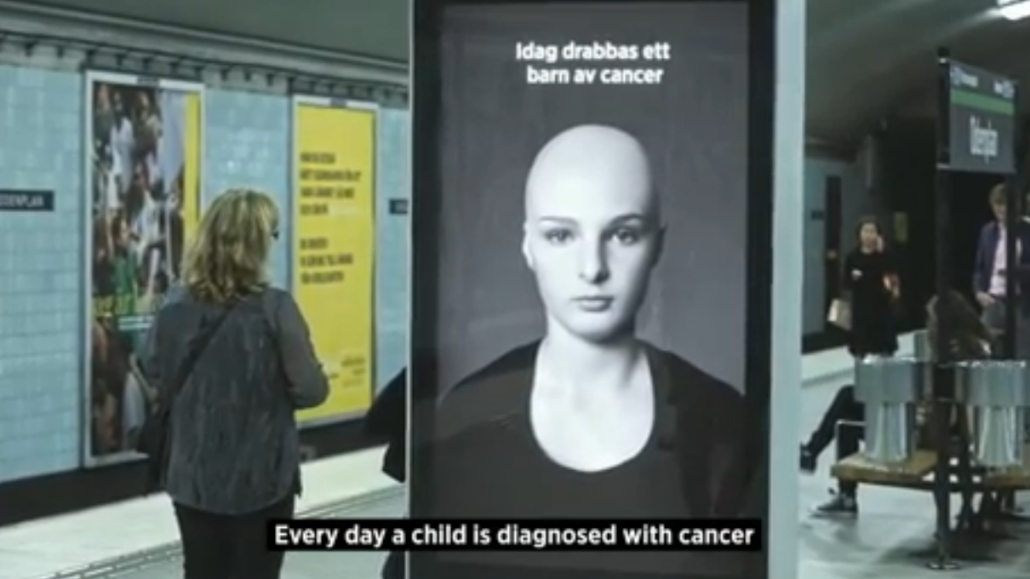 This is the second installment of Digiday’s series that highlights interesting, creative, funny or otherwise notable digital projects from around the globe. While these lists are by no means meant to be comprehensive, it is our intent to shine a light on the rest of the world’s current best. Please send me tips.

A Swedish haircare company comes out with a campaign for a message. Nestlé Fitness has developed a “bra-cam” for a cause, and another British campaign takes a lighthearted approach to testicular cancer. This roundup of global creative has no dearth of heart. A few of our favorites:

Nestle Fitness and McCann Paris’s Bra-Cam Initiative
McCann Paris launched a worldwide online campaign late last month in partnership with Nestlé Fitness to inspire and unite women in the fight against breast cancer. With a video chronicling a day in the life of a woman wearing a camera hidden in her bra, the point is hardly subtle: a woman’s breasts are “checked out” on a daily basis. The bra-cam is essentially a cheeky way to remind women to screen themselves.

The campaign comes with helpful information on how to properly conduct a self-examination and, with the hashtag #CheckYourSelfie, a social media component too. According to Topsy, the hashtag has gathered over 3,100 mentions in the past 30 days.

#Feelingnuts by Check One Two and Studio Aka
A little something for the half of the population with a Y chromosome. This London-based campaign by Check One Two, a movement launched in 2012 dedicated to spreading awareness about testicular cancer, also takes a playful approach. In the campaign’s newest video, a pair of animated testicles talk to each other. Voiced by British comedy duo Ant and Dec, the talking testes reveal that men have an approximate 95 percent chance of beating testicular cancer if detected early.

Produced by agency Studio Aka, the campaing also encouraged viewers to join the #FeelingNuts social movement to spread the life-saving message. The message has gone viral on social media, with Topsy reporting over 10,000 mentions on Twitter in the past 10 days itself. Even Hugh Jackman jumped on the bandwagon.

“A Hair-raising message” by the Swedish Childhood Cancer Foundation
A new spin on the popular digital subway ad that Swedish hair-care company Apotek Hjärtat created for its Apolosophy product line, this one is created by Swedish agency Garbergs. It too works to raise awareness for cancer. As with the previous video ad, the new one shows a girl’s hair blowing in the wind whenever a train arrives. But there’s a catch. The clip ends with the girl’s hair flying off, revealing a bare, shaved head — highlighting the common side-effects of chemotherapy.

It’s a strong and powerful message on behalf of the Swedish Childhood Cancer Foundation. And judging by the stunned reactions of commuters, it appears to be working.

La Maison de Carres by Hermès and AKQA
French for “house of squares,” Maison des Carrés is a beautiful graffiti-animated retail website designed by agency AKQA. The virtual shop lets users explore Hermes’s collections and search by size, color, material or theme. The house has a wide variety of rooms, including a treasure chamber, saloon and a color-mixing kitchen.

There is also a selection of funky fashion films that visitors can watch. The YouTube video has been viewed over 40,000 times since it was released on Sept. 19.

“Incredibly Close” by Subsonica and Isobar
This is some next-level wearable tech right here: a jacket covered in crowdsourced GIFs. CuteCircuit and Italian rock band Subsonica are inviting fans to use Google’s GIF-maker tool Google+ Motion to submit their own GIFs to the band. A few lucky winnings GIFs will be hand selected by the band to appear on their jackets whenever they play their hit  ‘Di Domenica,’ ‘Di Domenica’ live.

The campaign is also being supported with YouTube Videos, pre rolls and a social outreach program across Italy.

Tourism video by Scottish travel agency Thorne Travel
If Scotland had really wanted independence, the country should have considered leading with this video. A small-time travel agency in the middle of the country has struck viral gold with this accidentally hilarious, disorganized video that makes absolutely no sense. It has a dose of everything, from instrumental house music in the background, to choreographed flashmob dance troupes to outdated, do-it-yourself special effects — and even a sassy crew of female travel agents sashaying the town in their red dresses as if on the ramp.

The video has already been viewed over 772,000 times since its release on Friday. And is about as tasty as a bowl of haggis.