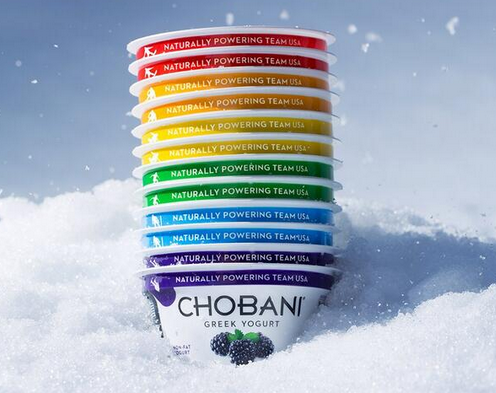 You’d think McDonald’s would have learned its lesson by now. A global sponsor of the Winter Olympics, the fast food chain is finding itself in the embarrassing position of having its hashtag — #CheersToSochi — hijacked by gay rights supporters to protest Russia’s draconian anti-gay laws.

The hijack comes as brands have struggled to find the exact stance to take in regards to gay rights in Russia, where just this week the country banned adoptions of Russian children by same-sex couples as well as single people from countries — like Canada — where same-sex marriage is legal.

Some companies with ties to the Olympics — like AT&T and Chobani yogurt — have come out with vocal criticism of the country’s anti-gay legislation. United States team sponsor DeVry University, for example, released a to-the-point statement that reads, in part, “We are against Russia’s anti-LGBT law and support efforts to improve LGBT equality.” Others — like Procter & Gamble and Coca Cola — have been subjected to fierce criticism themselves for issuing little more than vague statements in support of equality.

Nice ad, @ProcterGamble. Too bad none of your terrific products can scrub off the #Sochi2014 stain. #CheersToSochi pic.twitter.com/6kSUu2pVzn — Queer Nation NY (@QueerNationNY) February 8, 2014

Here is a brief rundown of how several brands are approaching the hot-button issue, with varying degrees of effectiveness. Tellingly, the sponsors who are more likely to do more business in Russia appear less inclined to criticize the country directly. The complete list of sponsors that have not spoken out against Russia’s laws also includes Dow, Visa, General Electric, Omega, Panasonic, Samsung, Visa and Atos.

McDonald’s
The house that Ronald built is no stranger to hashtag hijacking. In 2012, the burger chain launched its #McDStories campaign, which was intended for consumers to share positive stories about the company. It didn’t take long, however, for the hashtag to become a thread of complaints, jokes, insults and horror stories from customers. McDonald’s pulled the campaign in just two hours.

Now, activists and gay rights supporters have latched on to its #CheersToSochi campaign with the same viral success — applying the hashtag to other sponsors as well. The reason? Many claim that McDonald’s has not gone far enough in condemning Russia’s harsh legislation.

“McDonald’s supports human rights, the spirit of the Olympics and all the athletes who’ve worked so hard to compete in the Games,” the company said in a statement. “We believe the Olympic Games should be open to all, free of discrimination, and that applies to spectators, officials, media and athletes.”

In an email to Digiday, a McDonald’s spokesperson declined to speak specifically to the issue of recent Russian legislation. “Understandably, the LGBT community is focusing its conversation on the Russian legislation,” she wrote. “McDonald’s is proud to be a top sponsor of the Olympics; our sponsorship dollars literally help the men and women who are working to achieve their Olympic dreams. We remain engaged with the IOC and have made clear our concern regarding this human rights issue and the paramount need to ensure non-discrimination and safety for everyone at the Games.”

If anything, the anodyne statement may serve only to further fuel #CheersToSochi hijackers.

AT&T
The telecommunications company could not have taken a more different approach from McDonald’s. A Team USA sponsor — but not a global Olympics backer — AT&T wrote a blog post last week titled A Time for Pride and Equality, in which it condemned the country’s policy in plain language:

Chevrolet
Unofficial sponsor Chevy put out two ads during the U.S. airing of the opening ceremony — both of which prominently featured gay couples in an Olympic first, according to gay rights group GLAAD. “The New Us,” a montage of different types of families, includes a gay male couple with a son and daughter. Another spot includes a shot of a same-sex wedding ceremony.

“Perhaps more than any other event, the Winter Games represents the global values that unite us,” said Chevrolet CMO Tim Mahoney in a statement — although, clearly total unity has not been achieved on this issue in Russia or, for that matter, America. “In this context, we saw an opportunity to extend the Find New Roads story by showing how Chevrolet is helping consumers try new things and break new ground.”

Procter & Gamble
Worldwide Olympic Partner of the International Olympic Committee and Sochi sponsor, Procter & Gamble has been mum on the issue of gay rights in Russia. It also happens to be Russia’s biggest television advertiser, according to the Wall Street Journal. The company that owns brands like Crest, Gillette, Tide and Ivory also made one of the more moving pro-mother commercials tied to the Winter Games — “Thank You, Mom.”

The problem? The state-run network on which Procter & Gamble advertises also employs Dmitri Kisilev, one of the most-watched anchors in the country, who recently said on the air that gays “should be banned from donating blood, sperm. And their hearts, in case of the automobile accident, should be buried in the ground or burned as unsuitable for the continuation of life.”

In response to a request for comment, a P&G spokeswoman issued the following statement to Digiday: “P&G’s commitment to diversity and inclusion is unwavering, and P&G strongly supports the International Olympic Committee’s statement on the right to participate in the Games regardless of race, gender or sexual orientation. We expect the IOC to ensure the Games are free of discrimination.”

Chobani
The company had its shipment of 5,000 cups of yogurt blocked by Russia due to arcane import issues. But Chobani, a Team USA sponsor, saved its complaining for the bigger issue.

“We oppose Russia’s anti-LGBT law,” Chobani CEO Hamdi Ulukaya told the AP last week. “We are against all laws and practices that discriminate in any way, whether it be where you come from or who you love.”

Coca-Cola
Coke aired an ad during the Super Bowl that featured footage of a gay male couple with a daughter. But the ad has not been enough to quell critics claiming the official sponsor has not directly spoken out against Russia’s laws.

“We do not condone intolerance or discrimination of any kind anywhere in the world,” a spokesperson wrote in an email to Digiday. “We will continue to demonstrate our support of the LGBT community and, more broadly, promote our values for diversity through our policies and actions.”

The note concluded with a reference to the Olympics, but not Russia’s discriminatory laws: “We support the core values of the Olympic Movement – excellence, friendship and respect – and are proud to continue our role in helping to make the Olympics a memorable experience for athletes, fans and communities all around the world.”

American Apparel
One of those “core values” of the Olympic movement is embodied in Principle 6 of the Olympic Charter, which states: “Any form of discrimination with regard to a country or a person on grounds of race, religion, politics, gender or otherwise is incompatible with belonging to the Olympic Movement.” The IOC has confirmed that this includes sexual orientation.

Google
Not an official Olympic sponsor, the search and advertising giant lived up to its “don’t be evil” credo when it prided-up its logo for a Sochi-themed Google Doodle. The image, which went live at the same time the opening ceremony was underway, depicted athletes performing various winter sports against a rainbow backdrop. The company did not comment on the image.