How Shake Shack won over millennials

Its milkshakes bring Gen Y to the yard.

Shake Shack might have received a lukewarm, neutral rating in the wake of its January IPO, but according to a new Goldman Sachs report released Tuesday, the burger chain has managed to amass a dedicated army of millennial fans. And a big reason for that, according to the report by analyst Karen Holthouse, is that its social media game is on fleek.

Shake Shack “does essentially no traditional marketing, but has a strong presence on social media, which speaks to its relevance among Millennials,” the report says. It cites both Vine and Instagram as examples, where its presence is massive relative to even social media heavyweights like Taco Bell. 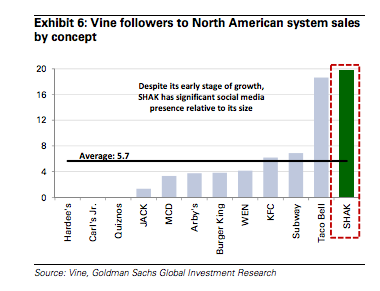 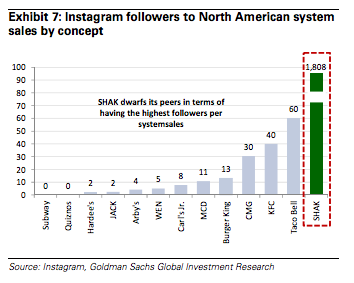 In terms of pure numbers, Shake Shack doesn’t have the largest following on most of these social platforms. Its advertising budget is also relatively tiny: In 2013, Shake Shack spent only $800,000 in advertising and promotions. But it has the biggest audience for its size — it has only 40 stores nationally compared to the thousands that both McDonald’s and Taco Bell have, for instance.

For example, Shake Shack — a beloved New York-based chain founded by celebrity chef Danny Meyer in 2004 — has only 155,000 followers on Instagram, compared to McDonald’s, which has nearly 500,000. Taco Bell has almost 490,000 followers, and KFC has about 250,000. It is also active on Facebook, Twitter, Pinterest, Tumblr, Google Plus and YouTube.

Analysts suggest that Shake Shack’s social media prowess has contributed to the brand’s overall success. “The success extends beyond just a creative Vine or highly stylized ‘foodtography,’” said Mary Beth Keelty, CMO at digital marketing agency PM Digital. “It is this level of dedication to understanding their core audience, and speaking to them in a native fashion, that has resulted in such success.”

Just ask Rebecca Ziegler. The 23-year-old self-described struggling actress was waiting to order her favorite burger at the eatery’s Battery Park location on Wednesday when she mentioned that her own loyalty to the brand increased tremendously when it interacted with her on Twitter.

“I have always loved Shake Shack but was thrilled when they retweeted me a few months ago,” she said. “Today, I’m using a coupon my mom bought me for Valentine’s Day, because she too knows how much I love it.”

That coupon will come in handy: with burgers averaging around $6, Shake Shack’s price points are higher than the rest of the industry. But even if it can be a little steep for some millennials, the company engages elsewhere. Shake Shack holds frequent contests and sweepstakes, for example, that it thinks fans will actually care about and want to participate in. One such contest, called “Burger Beats,” invites musicians to submit their music for a chance to be played at more than 70 Shake Shack locations in nine countries across the world.

“The secret to our outsized social media growth is simply this: constant engagement,” Edwin Bragg, the director of marketing and communications at Shake Shack, told Digiday. “Social media allows us to actively hear fans rave, complain or just tell us what’s on their mind — we want to hear it all. And we take the same hospitable approach on social media that any of our team members would take in person at a Shack with a guest.”

According to the report, several factors beyond social media skills have contributed to Shake Shack’s popularity among 18-32-year-olds — including the fact that it uses natural meats and displays its sourcing clearly, pays its employees a rate well above the minimum wage and partners with local partners and charities.

Shake Shack’s look is itself edgy, with modern interiors and flat wooden tables. “There is something so ‘New York City’ about going there,” said Marika Washchyshyn, 24, who is originally from Canada. She added that she frequently makes the trek down to its flagship location in Madison Square Park whenever friends visit to give them that “New York” experience.

It’s an experience that, increasingly, is familiar to members of her generation all over the world.