As Chipotle rehabilitates its image following an E. coli outbreak that left 500 people sick in the U.S., the company is being battered once again for its decision to close stores nationwide this afternoon for a safety meeting.

Today’s meeting is meant to outline the chain’s new food safety guidelines to franchise owners and employees, happening between 11 a.m. to 3 p.m. local time. As a result, Chipotle’s 2,000 locations will effectively be closed the lunch hour rush. This is not a detail that escaped competitors.

First up is Moe’s Southwestern Grill. The chain, with more than 600 locations nationwide, bought ads online and off touting the fact that it’s open today.

Every #Chipotle is closed today for a food safety mtg. #Moes decided to use this as fuel. https://t.co/FWlgD222zL pic.twitter.com/L6fX705MRd — Taylor C. Shaw (@taylorcshaw) February 8, 2016

“We are competitors,” Moe’s CEO Bruce Schroder told CNN Money about the ads. “And we didn’t want the category to go dark for a day, so why not give Moe’s a try?” 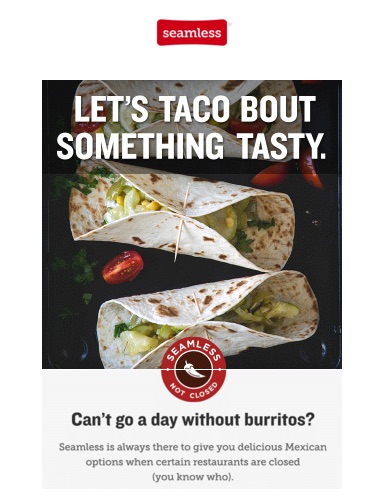 On the Border, another competitor, is also running a promotion that takes a dig at Chipotle:

Our Border Bowls and Burrito Boxes are just $5 TODAY ONLY while the other guys are closed. #chips& #salsa #included pic.twitter.com/7AktbGN9mC

Chipotle is giving away a free burrito.. This is real. Thank me later!!! pic.twitter.com/sK4JKhnhBu