Is Samsung UK’s #thatsucks campaign worth the risky hashtag? 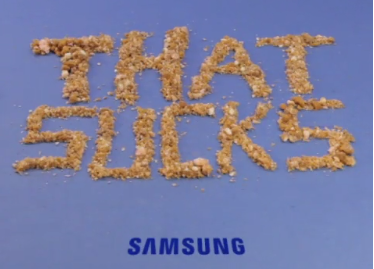 Samsung UK is jumping on the real-time marketing trend with a smart but risky play on words to promote its new vacuum cleaner. With a hashtag that seemingly screams to be hijacked by Twitter trolls, @SamsungUK is posting a series of timely jokes and short videos under the hashtag #thatsucks. But as many who’ve come before them have learned, being funny and topical is a difficult art to master.

Samsung’s Twitter targets range from TV shows and news events to the more humdrum problems we face everyday. But not every gag will get you a laugh. Some of the tweets suggest it’s trying a bit too hard.

When you try to combat nerves by ‘imagining the audience naked’ and realise you’re giving a talk to the Naturist Society, #thatsucks. — Samsung UK (@SamsungUK) August 22, 2014

Similarly, a hashtag of this kind leaves the door open for dissatisfied customers.

In fairness though, the brand is scoring a few comic wins.

Where the strategy really begins to pay off is when timeliness and witty visuals combine. Its tweets about “Orange Is the New Black” or the “The Great British Bake Off,” which use Vine to stand out, have each received many more retweets than the average posts on its channel.

When your #GBBO three-dimensional biscuit scene just won’t stand up on its own! #ThatSucks https://t.co/RinPnckc8B — Samsung UK (@SamsungUK) August 13, 2014

It’s with the company’s marketing team, agency Cheil and TV funny man David Schneider’s new social media agency that is behind their attempt to get a giggle on Twitter. There’s a lot of scenario planning which has gone into the new strategy, central to which is a danger scale. Zero having no impact on anyone — bland and characterless. Ten being down right rude.

Cheil’s head of social Jonathon Buckley said the brand accepts that there will always be haters but wants the brand to develop a stronger personality and voice. “We think we’re on the 3 or 4 scale right now, and we’re hoping to move to the 6 or 7 space in time. We couldn’t have gone in too strong from the off. It’s about building it up and deciding what we can and can’t say. With the on-the-fly stuff, we rely on good communication and team work — and good legal training!”

Risks aside, there’s research to suggest this is a smart move. Humor is the best method to get anyone to share your message, and Brits are more likely to share humorous content than any other kind, according to research from UM.

While it is hard for a multifaceted brand like Samsung to be funny, Schneider tells brands to “think jockey” — make posts short and human.

“To cut through, you need something different. It could be bribes – and that does work – but, really, humor is a lot cheaper,” said Schneider in a recent interview. “If you get loads of retweets, then people are carrying your brand around the Internet for very little money, and humor is more likely to do that than anything else.”

Frances Kehinde, creative strategist at Unique Digital said this campaign highlights a couple of other important lessons for marketers: “Firstly, this campaign shows us that good copywriters have become even more important in this day and age. It’s important to have personality. In addition, if you’re going to use a negative hashtag, you really need a robust community management team to be there to respond to any backlash.”

In the quest to tap into popular culture with real-time tweets, Samsung is has a mixed record of success so far. But perhaps the real danger is not taking a risk at all. As Bill Bernbach once said, “If nobody notices your ad, everything else is academic.”