Sam’s Club wants to be the bulk-buy store for the affluent, but it’s being eclipsed in sales by top competitor Costco and cannibalized by sister retailer Walmart.

About 12 percent of Walmart Corporate’s $482 billion annual revenue is attributed to Sam’s Club, the warehouse retailer started by Walmart founder Sam Walton in 1982, originally meant to supply product for small businesses. But over the years, Walmart and Sam’s Club shoppers merged: According to data by research firm Kantar Retail, 80 percent of Sam’s Club shoppers said they also shopped at Walmart in the past month.

“We want to be less of a Walmart,” Sam’s Club CEO Rosalind Brewer told the Wall Street Journal. (Sam’s Club was unavailable to comment in time for this article.) The company is trying to set itself apart from the discount retailer — and align itself closer to Costco’s sales numbers — by offering more organic foods and more brand name, higher-end products, in addition to its bulk options.

Sam’s Club’s year-over-year revenue inched up by 0.5 percent in 2014, while Costco’s jumped 6 percent in the same time period. But while Sam’s Club is working to revamp what it’s selling in stores, it should be focusing on improving its digital footprint as it falls behind as a multichannel brand, according to a data index study culled by L2.

For Walmart, which, as a catch-all retailer, is in direct competition with Amazon, a major portion of resources have been funneled into improving its e-commerce. In February, Walmart announced $1 billion would be dedicated to building out those digital efforts; in its second-quarter earnings call, revenue from e-commerce purchases increased 16 percent year-over-year.

L2 ranked the digital capabilities of all the major big box stores by judging a variety of topics, including social media, mobile and e-commerce. Walmart was listed at No. 2 — “genius” level by L2’s standards — just behind The Home Depot. Sam’s Club, at No. 20, was ranked “average.”

The graphic below shows how Sam’s Club (pink) compares to both Walmart (green) and the index average. The bigger the radius, the better the brand. 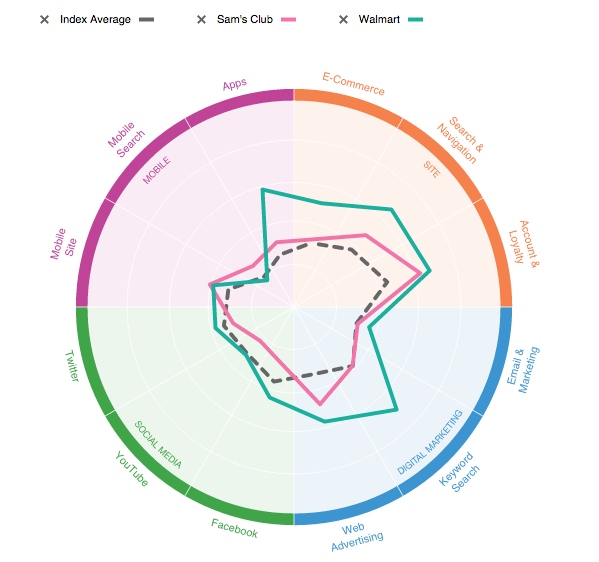 “[Walmart’s] success comes not only from the products it sells, but also from digital prowess,” said L2’s Elizabeth Rosen. L2 urged that Sam’s Club — like Walmart — invest in building out across-channel capabilities, like allowing customers to buy online and pick up in store. In a previous interview with Digiday, Walmart spokesman Bao Nguyen said that the retailer found during a recent sale on July 15, the number of customers choosing the so-called click-and-collect option increased by 300 percent.

Sam’s Club is also striking out on social media. L2’s data found that although it had over 3 million followers across accounts (concentrated most densely on Facebook, followed by Twitter), it ranked in the bottom of the big-box pack in terms of engagement. Walmart, on the other hand, was leading in both engagement and follower count. 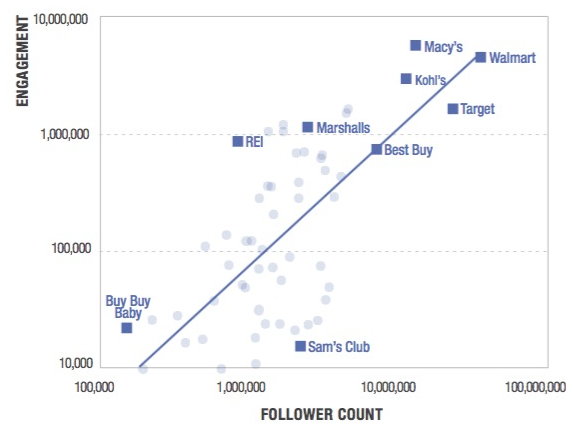 One look at Sam’s Club’s official (but unverified) Instagram account puts this low engagement on harsh display. The account has 3,500 followers, compared to Walmart’s 191,000, and its posts lack that certain curated je ne sais quoi that has become run of the mill for brands on the platform.

The post is just one of nine other total Instagrams from Sam’s Club, whose likes hover around 50 each. The retailer should take a leaf out of Walmart’s playbook: fewer hashtags, more emojis and zero Hot Pockets.