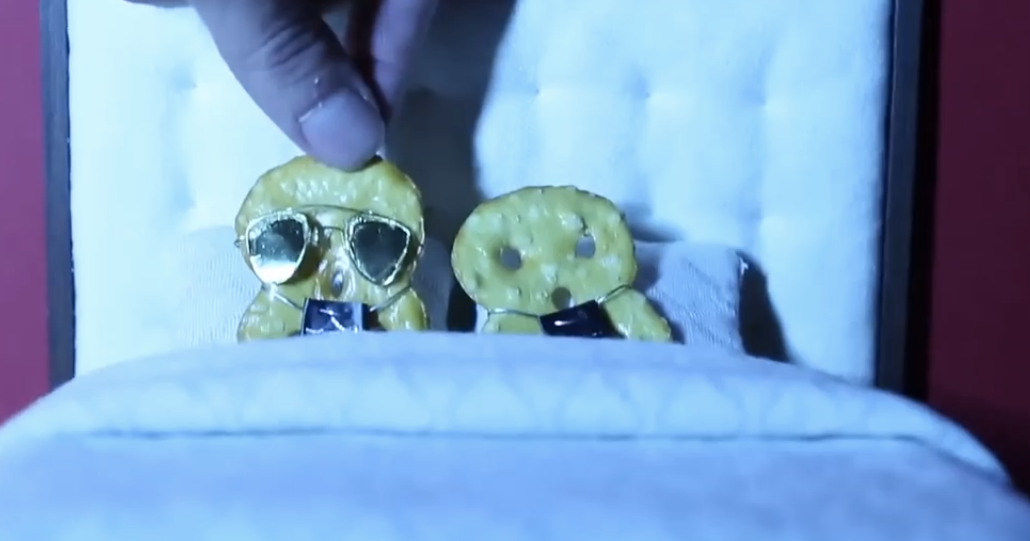 Frito Lay’s pretzel brand Rold Gold has launched a new video series, made up of parodies based on today’s hottest TV shows and genres, featuring the tiny snacks as fully developed characters within “built to scale” sets, promoting its product, the pretzel thins. Each video is considerably detailed — from the tiny handmade, snack-scale sets and props, to the careful “acting” of all the hand-controlled lead actors, the Rold Gold pretzel thins.

The first video is entitled SICU, or Snack Investigation Crime Unit, which is a gripping crime drama featuring a pretzel thin investigator and a seemingly unsolvable case of stolen hummus. Two others have been released so far, one that seems to be a spin-off of the hit series “Scandal,” and another one that parodies the telenovela genre in general.

The “Break Happy” campaign was created by New York digital shop Deep Focus and is an attempt to drive brand affinity among millennial women.

“We know these women at work are always on and rarely take a break, except to check in on social media once in a while,” Ryan Matiyow, the senior director of marketing at Rold Gold, told Digiday. “We knew we had to appeal to her interests and savvy sense of humor, so we focused on entertainment as a way to endear her to the brand. By literally developing characters out of the products, we infused personality into the brand.”

“Break Happy TV” is being distributed and promoted across all of Rold Gold’s social channels, including a microsite, YouTube, Facebook, Twitter and Tumblr. The campaign is responsive, with the brand tapping into existing conversations around specific TV shows and coming up with its own parodies based on those insights in real time.

The campaign is an extension of “House of Gold,” Rold Gold’s campaign from earlier this year, which re-launched the brand and unveiled its new line of pretzel thins. The 16-episode digital snack-themed soap opera featured a scandalous love triangle, and got more than 3.8 million views and a 300-percent growth across social platforms for the brand.

“It’s rare that you can tell such a rich story and build such equity in a brand without even mentioning a single product benefit,” said Ken Kraemer, the chief creative officer at Deep Focus. “In a world where brand content truly is competing with films and TV shows, this kind of work can really resonate with consumers and ultimately drive trial.”