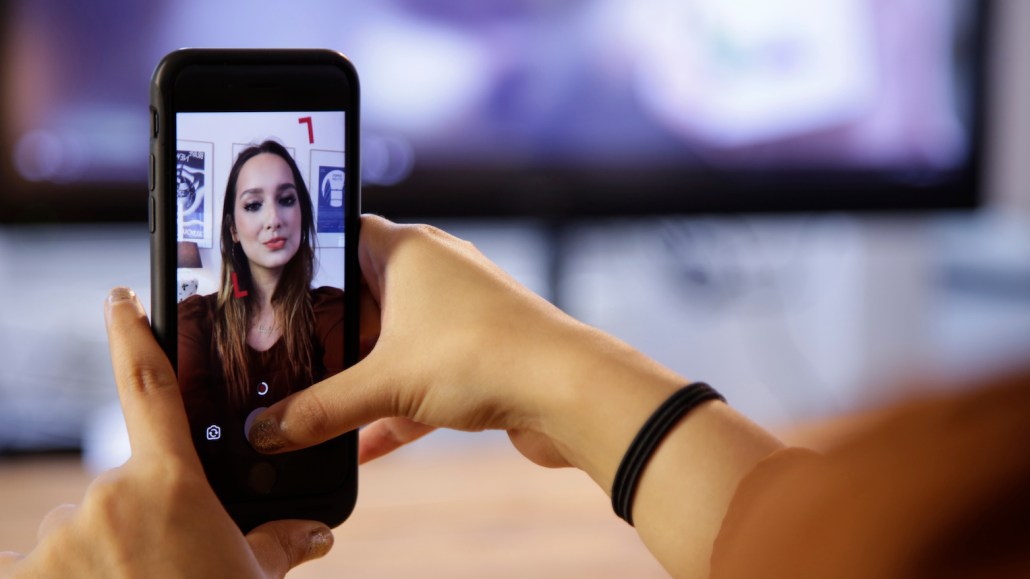 Cosmetics maker Rimmel London experimented with augmented reality in June 2016 when it let users virtually try on makeup using an app. Now, Rimmel is hoping to widen the audience for the same idea using Facebook Stories.

On Wednesday, the Coty-owned brand launched interactive filters on Facebook’s new Camera Effects platform. In Facebook’s in-app camera, users say “wow” to cycle through four different Rimmel eyeliner looks on their faces. They can then take a photo of their favorite style and share it to Facebook Stories.

It’s been hard to get people to use AR via apps because there’s a high bar to getting people to download a new app, but the hope is that with Facebook, it will reach a wider audience. “This is allowing us to take a lot of the learnings we had with the app-based model and make it more scalable,” said Fred Gerantabee, global vp of digital innovation at Coty.

Rimmel wouldn’t say how many users have downloaded the free “Get the Look” app, but according to the Apple App Store, only 15 people have rated it, not enough for the store to display an average.

Developers can use Facebook’s AR Studio to create custom effects at no charge, which is also cheaper than building an app. Gerantabee said on Snapchat, meanwhile, similar filters “are notoriously expensive and usually run for one or two days, or a week at best.”

Rimmel is one of the early adaptors of Facebook’s AR technology. At Facebook’s annual F8 Developer Conference in April, Facebook announced it would share its Camera Effects API with a closed beta group of developers. U.K.-based augmented reality agency Holition, which worked with Rimmel to develop the try-on effects, was one of the developers invited to be part of the beta group.

It’s unclear when Facebook will open the beta group to others and begin monetizing the technology. “These tools are still in the early days, so we will work to optimize both the Camera and the Camera Effects Platform for people first,” said a Facebook spokesman. “In the future, if appropriate, we will consider paid ways for businesses to participate.”

Other brands such as soccer club Manchester United, game developer EA, Nike and Rimmel’s sister brand Gucci have experimented with the AR effects. Nike used the technology to overlay a sweatband on a user’s head and pull in a map of their running route.

“It’s always a risk to introduce something new,” said Gerantabee. “But the great thing about playing in platforms like Facebook and Instagram, and even Snapchat, is that you are adding functionality to things people are already using.”