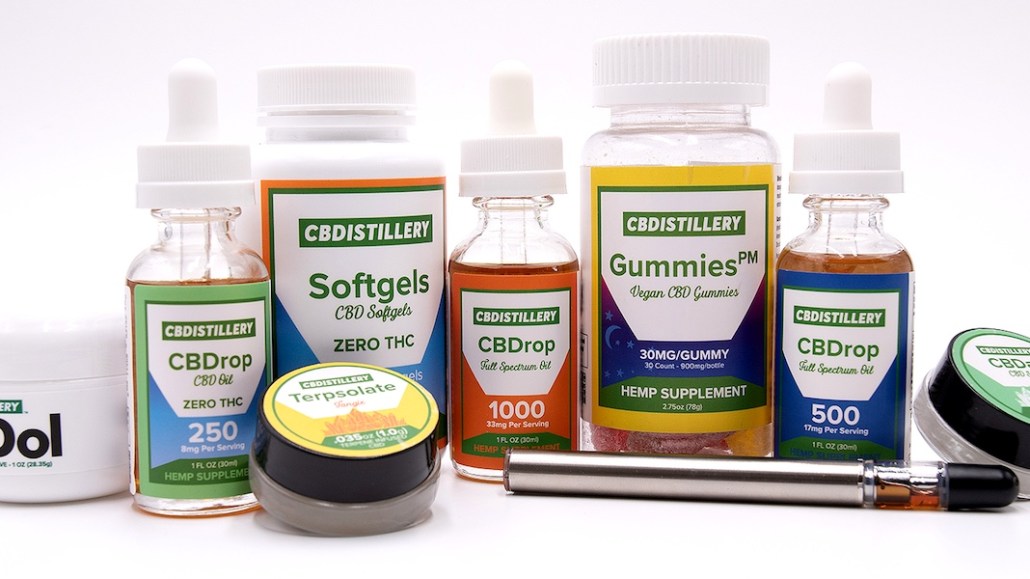 The sudden ubiquity of CBD has been a cash boom for businesses that got in at the right time — and to grow, the industry is taking some cues from the direct-to-consumer playbook.

CBDistillery, a retailer selling hemp-derived cannabidiol products like gummies, drops, creams and powders, has found success in a model that strikes a balance between wholesale and direct: CBDistillery sells online only through its own e-commerce site, where it maintains a direct relationship with customers relying on first-party data.

Offline, the company has 1,000-plus retail partners, like wellness shops, head shops and indie health stores. As it grows, the company is putting its own spin on the tried-and-true DTC playbook that has boosted other consumer brands to reach big audiences: It isn’t VC funded, and it doesn’t spend on direct response ads on Facebook, Google or other digital platforms thanks to restrictions on drug and drug-related products. So far, the brand has used mediums like podcast and radio commercials, influencer marketing, programmatic advertising, event sponsorships and SEO to gain traction online and spread awareness.

The company plans to continue to ride the CBD boom, which has infiltrated the wellness category. According to a 2018 study by The Brightfield Group, the hemp-CBD market is expected to reach $22 billion by 2022. The products are infiltrating malls and luxury department stores. According to Van Dusen, nothing’s been signed yet, but the company is in talks to hit shelves of retailers like Walgreens, Walmart, CVS and Target. CBDistillery has also been on a hiring tear, ending 2018 with 76 employees and planning to hit 100 by the end of the first quarter this year. Its marketing team grew from 2 people at the start of 2018 to 15 today.

Competition is also heating up, putting pressure on all industry players to make the right strategic moves as the category expands. Cannabis and CBD retailer MedMen has built a 25-person in-house agency in order to grow its reach while dealing with restrictions. For now, much of these companies’ communication strategies revolve around removing the stigma that’s associated with CBD and cannabis products, and teaching people how to incorporate them.

“We felt strongly that people should get the highest quality CBD, and we stood by that. We’re known as a high-quality, high-value brand,” said Van Dusen. “Another thing we spent a lot of time on is education. There’s a lot of uncertainty surrounding the category. We put a stake in the ground as a resource for the industry. We think that will pay dividends in the long term.”

While CBDistillery has built an offline strategy through retail partners (it doesn’t operate any of its own physical stores), it’s kept its online business in house. The company doesn’t sell on Amazon or other third-party marketplaces, Van Dusen said, in order to maintain a relationship with its online customer. Bringing in a retail middleman online, where customers don’t have a shop owner to get recommendations or a vouch of approval, is risky business for a category that’s still working its way into the mainstream.

So, right now, a DTC-online, wholesale-offline model works best for a budding CBD brand, he said.

“I wouldn’t put a flag in the ground about Amazon either way, but we really enjoy the DTC business online. Amazon has not come knocking yet, but we would be hard pressed to move our business over there,” said Van Dusen. He added that the idea of testing a few products on Amazon could be appealing, but losing first-party data with the online customer is a big risk. “Offline, we understand the data from the types of retail shops we sell to. We want to understand our consumer and build from there.” — Hilary Milnes

By the numbers: E-commerce takes over the world
A new report from the Interactive Advertising Bureau makes the case for so-called “direct” brands.

Behind the buy
This week, Amazon acquired home WiFi startup Eero for an undisclosed amount. Eero was one of the first startup brands to participate in Amazon Launchpad, an initiative in which Amazon promotes young brands on its site in exchange for brand’s commitment to selling on Amazon in the early stages. The move makes sense on both sides of the deal: Amazon’s acquisition strategy has been in part focused on building Alexa into a smart home ecosystem, and having a brand of home WiFi hotspots under its belt adds to past smart home acquisitions, like doorbell camera company Ring and security camera company Blink. Eero, meanwhile, last raised funding in 2016 with a $50 million round, and last year, laid off about a fifth of its staff.

One source who works with brands on their Amazon strategies sees the deal as a lifeline for Eero. It’s in a category that’s hard to scale, with customer acquisition costs rising and a slow build that makes it hard to please investors. Because it worked with Amazon Launchpad early on, Amazon already knew about the Eero business model and customer. It intertwined itself with Amazon early, which in turn influence. its pricing model, other potential wholesale relationships and customer experience. It didn’t necessarily seal its fate, per se, but it laid the groundwork. — Hilary Milnes

Deliv breaks up with Walmart
Google-backed Deliv, one of Walmart’s last-mile delivery partners, has served up Walmart a 90-day termination notice. The company, which worked with Walmart on delivery pilots in San Jose and Miami, reportedly pulled out because Deliv drivers had to wait 40 minutes or more for grocery orders. Walmart and Deliv’s inability to make things work highlights the problem retailers face using stores as fulfilment centers, especially when customers get priority during core hours. As Jeffrey Neville, retail analyst at BRP Consulting recently told Digiday, using stores as fulfillment centers opens up possibilities for a glut, especially given that stores are typically designed for browsing instead of fulfillment.

Still, losing Deliv isn’t a crippling blow. Walmart is still hedging its bets on other partners, including Postmates, Doordash, Point Pickup, Skipcart, AxleHire and Roadie and Deliverr, with whom it works to fulfill two-day online marketplace orders for sellers. — Suman Bhattacharyya

Under Armour trims the fat
Under Armour, which reported sales growth of 1.5 percent to $1.39 billion on its fourth-quarter earnings call Tuesday, is on a path to streamline operations through spending reductions and reducing excess inventory. The brand decreased inventory by 12 percent in the fourth quarter, to $1billion. The retailer, over the past year, has been on a path to reduce excess inventory that cut into margins. In earlier investor calls, Under Armor claimed the excess stock was being sold through off-price channels. — Suman Bhattacharyya

What we’ve covered
DTC TV: In response to Facebook’s ever-rising ad costs, direct to consumer marketers have flocked to TV, but they’re now finding the traditional media platform comes with its own complications.

Payless problems: Nearly two years after emerging from a bankruptcy filing, Payless ShoeSource is reportedly preparing to file for bankruptcy protection again. An ex-employee explains why.

High luxury: In March, Barneys will open a cannabis lifestyle shop on the fifth floor of its Beverly Hills flagship store and will begin to sell select cannabis accessory products on Barneys.com.