Subscribe to get the Digiday Retail Briefing in your inbox every week.

Amazon advertising is on track to becoming a $3 billion business, but is it coming at the cost of user experience?

“Sponsored Brands stand to benefit from Amazon’s recent layout changes that significantly increased the number of page locations where these ads may show,” the report read.

Advertising is important for Amazon — it’s a high-margin business, especially important as growth slows down in retail and Amazon Web Services. But for buyers, one question is that as Amazon keeps adding more ad space to its properties, the effect this has on user experience — and if this could be a problem. Mike Dossett, vp and director of digital strategy at RPA, said there is definitely somewhat of a conflict between Amazon’s “desire to pursue great customer experience and make money from advertising.”

Merkle also found that sponsored product conversion rate is higher than Google shopping, something that means that Amazon searchers in general may not mind seeing more ads because they approach Amazon with intent to convert.

“The reason you see ad placements explode on the platform is because they are resonating,” said John Ghiorso, CEO of Amazon ad agency Orca Pacific. “Hopefully they don’t upset people because they’re highly relevant.”

The issue, said Dossett, is that as Amazon moves to becoming the third leg of an ad triopoly, with ads that aren’t just direct response or performance marketing, there may be more of a temptation to do “interruptive” advertising. “At some point, they  may have to to make a choice between customer experience and advertising. But I think they will pick customer experience.” — Shareen Pathak

3 questions with Carrie Bienkowski, CMO, Peapod:
Online grocery delivery hasn’t quite been cracked. What’s the hold up?
I think I have a unique view on what’s happening now because prior to working at Peapod, I was leading the eBay fashion vertical in Europe. That was prior to fashion’s online inflection point. There was a time in recent memory when people were questioning whether or not women would ever buy jeans and shoes online. Even beyond that, there were some debates around whether mobile was something that consumers would ever accept as a transaction device. So things can change quickly, and consumers adapt quickly. For grocery, the rise of the online shopper and online experiences can no longer be ignored.

How does that influence your role?
The challenge for CMOs is to show value in return for every single dollar spent. That’s hard to do with traditional media and marketing, so business has shifted toward performance marketing, where you can track customer behaviors and conversion. But you can’t be all in on just that, either. So therein lies the other challenge: the media mix. For us, we’ve been evolving and pivoting the last few years to balance brand and performance. Search engine marketing is king. But you can’t merely have a paid search strategy, because you can’t get scale and volume. So we’re always striking a balance: We know which channels are most efficient in terms of quality and prospects, and which we can scale.

A lot relies on performance marketing. What does that mean for your budget?
For both channels, Google and Facebook, it’s no surprise the cost has gone up. It’s supply and demand. More brands are investing in these channels but the audiences aren’t getting any bigger, so the cost is symptomatic of the fact that the social media platforms aren’t growing their user bases significantly. So we are constantly driving efficiencies through granularity of keyword searches in terms of social media channels, making sure our content is fit for purpose, it’s appropriate for the right audience, and it resonates while targeting prospects. — Interviewed by Hilary Milnes

Amazon isn’t king
Amazon may dominate e-commerce for customers, but among retail executives surveyed in August at a Digiday Retail Forum, only 11 percent said Amazon is their fastest-growing e-commerce channel. The vast majority — 72 percent — said their own channels are growing faster. 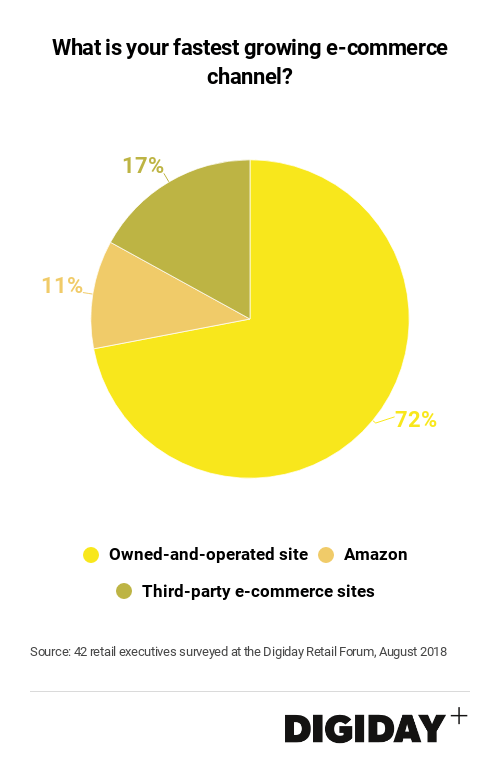 Sign of the times
Boxed.com, a bulk online delivery service that sees itself as a cross between Amazon and Costco, has been experimenting with unconventional advertising strategies after seeing declining returns in its digital ad spend — including on Amazon.

Emily Kalen, a spokeswoman for the company, said Boxed has been experimenting with programmatic direct mail in an effort to reach consumers away from the computer, in the nooks and crannies of their homes. Unlike traditional direct mail, the new take works by targeting a customer who visits Boxed with a personalized piece of mail.

A recent success for Boxed was a back-to-school campaign over the first two weeks of September. Though Kalen declined to disclose exact figures, she said the average order size rose by 21 percent over the campaign. It worked by targeting all site visitors with a piece of physical mail advertising the promotion.

The campaign also increased the repeat customer rate — or consumers who make another purchase within about a month — by 30 percent. Those are figures that can’t be touched by conventional digital advertising, she said.

“(Direct mail) has been really instrumental in both cross-selling our existing customers into new categories, or pushing them that much further to transact on something they’ve been looking at,” said Kalen. She added, “What are the ways we can use a tactile medium to add value to a customer experience?” — Michael Bodley

Macy’s is growing its employee influencer program after it showed signs of progress.

As Shopify looks to expand its business internationally, the e-commerce platform is pushing its Plus product, which provides services to larger-scale businesses.