#QuarterLifeCrisis? The Estée Lauder Cos. have you covered 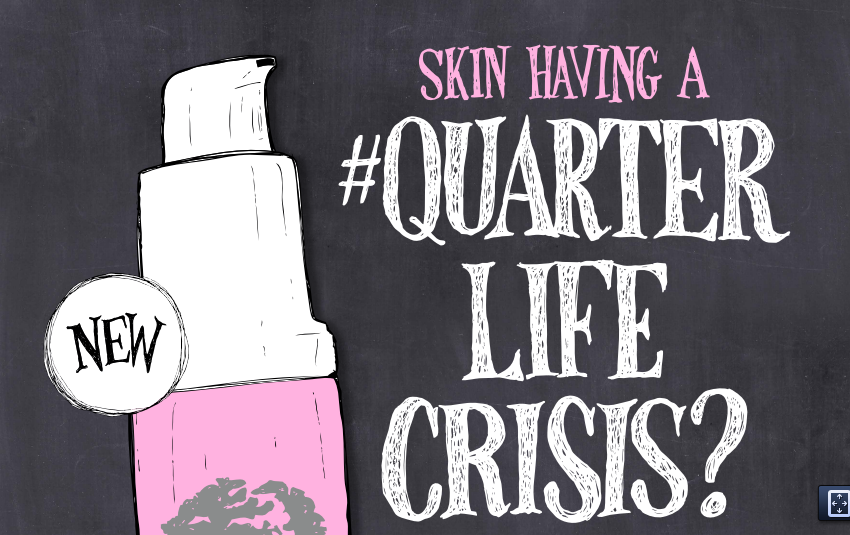 Acne is the scourge of teen years. It doesn’t get any better later on: In midlife, skin is beset with lines and wrinkles. The beauty industry has long known exactly how to play into those specific epidural insecurities. But what about the quarter-life crisis and its attendant skinsecurity? You know, when your skin does something … weird … in between?

Estée Lauder’s Origins skincare line has heeded the call that no one has really issued with its new Skin Renewal Serum for millennials, accompanied by an all-out digital campaign.

“#QuarterLifeCrisis” is a global, integrated, digital campaign developed by Estée Lauder’s own millennial employees, aimed at 20-somethings to help them address the early signs of skin aging. The new product has been available online and in Sephora since January and is set to hit the shelves elsewhere next month. The campaign is being rolled out in stages — with a social campaign, an app, native content and partnerships with social media stars to follow.

When you found a zit. And the beginnings of a wrinkle. The struggle is real. #QuarterLifeCrisis

“We’ve never really had a product targeting millennials before, so we’re playing in all the places we need to be — entering conversations that are already authentic,” Mark Ferdman, Origins’ vp of global consumer engagement, told Digiday. “There’s a moment for a woman in her twenties where she looks in the mirror and realizes that something’s just not right. That’s where we want to be.”

Launched in 1990, Origins is Estée Lauder’s natural skin-care products line, which uses organic plant ingredients and natural essential oils. While this is Origins’ first attempt to cater to the millennial demographic, other skin-care brands have already developed similar products. Shiseido launched its Ibuki range, and Dr. Brandt came out with its Xtend Your Youth line in 2013.

Origins has been promoting social chatter around the hashtag #QuarterLifeCrisis for a month now with considerable engagement: The brand has gathered over 900 mentions on Twitter, according to social analytics firm Topsy. On Monday, the company also hosted an all-women “Quarter Life Crisis Survival Guide Panel” to celebrate the launch of its app. Yelp’s community director Stephanie Yolish and the campaign’s illustrator, Bee Stanton, among others, dished advice on how to handle anything from a hangover to career decisions that 20-somethings face.

The app features information on how women’s skin changes around this time in their lives, has product information and provides a QR code that allows users to to enter to win products. It also has a fun element, which lets users add Stanton’s original illustrations — from tiaras to flowers and graphics — to personal pictures that they upload.

Millennials on staff at Origins were consulted in the creation of the line, and millennials appear throughout the campaign. Tanya Burr, a YouTube star with over 2 million followers and a book, and Jen Chae, who runs the YouTube vlog “From Head 2 Toe” with over a million followers, are both touting the product, for example. The brand has also partnered with BuzzFeed to create more native content around the issue, which will be out in the next few weeks.

“In order for a brand to really include the consumer in the conversation, it is really important to her why the product is relevant where she is,” Trenesa Danuser, Origins’ vp of global communications and strategic alliances, told Digiday. She added that this was the reason why the campaign went beyond the product to address other issues by young women in this demographic, whether it is related to life or career choices.

Megan Hartman, the strategy director at brand strategy firm Red Peak, said it was a smart move by the brand to build consumer loyalty at an age where young women begin to reevaluate their beauty choices.

“I think it’s a very fresh perspective coming from Estée Lauder, because they typically have been perceived as a mature brand,” she said. “With this fun tone and addressing what millennials perceive as a genuine problem, they are saying that they don’t want to be known just as your mother’s brand anymore.”

“We are excited to see how useful this strategy will be for us,” Danuser said.