Why IMAX is launching a rebranding effort in print 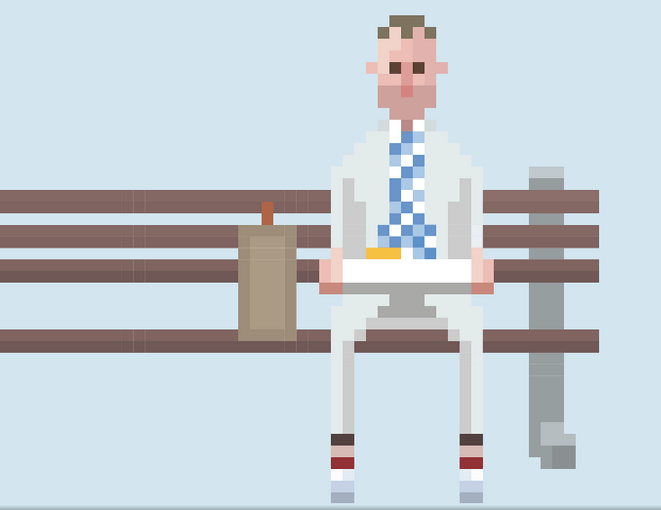 Take a look at the New York Times or the Los Angeles Times from Friday, and you’re going to be greeted with a full-sized, two-page ad for IMAX featuring a pixelated animated image of Tom Hanks from the film “Forrest Gump”: 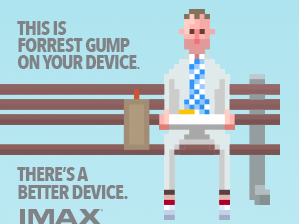 The spread is part of a new campaign — the largest yet by the company — to market IMAX as its own brand. Shorthand for “Image Maximum,” IMAX is a giant screen, high-resolution film format. The occasional blockbuster, like “Dark Knight” or “The Hobbit,” will be converted to play on IMAX screens as a promotion for that film. But this is the first time IMAX is promoting itself as the star brand.

The “Forrest Gump” campaign links to an online landing page, which houses some interesting featured content, such as an interview with director, Robert Zemeckis. It is being promoted online and through IMAX’s several social media accounts. A video series, titled “IMAX 101” accompanies the campaign, and consists of explainers on how IMAX technology works.

But why would a digitally native film production company launch a campaign through a newspaper ad? Eileen Campbell, the CMO at IMAX Corporation, explained the thinking to Digiday. Excerpts:

What are your strategic aims behind this campaign?
What we’re hoping is that this campaign will work on a couple of levels. One is that it will make our brand more salient and make you think of going to movies, no matter who you are. And that’s a real opportunity for us because we haven’t done a ton of brand advertising outside of the theater in the past. But we also want to give the millennials a reason to believe in the movies.

On another level, we are also looking to grab the attention of industry and opinion leaders and enlist their support — which would hopefully lead to even more interesting partnerships.

Why did IMAX launch this campaign now?
The time felt right, the company is at a stage where we’re starting to globalize and getting some consistency and continuity around our messaging is important for us. IMAX is no longer an ingredient brand but rather an experiential brand. In a way, we’re also promoting a subtle anti-piracy message, urging people to think about quality over convenience.

Why kick off the campaign with a print ad?
It is sort of counter-intuitive, but we chose print for a couple of reasons. One is, that we’re a big immersive format, and in some ways we think that millennials are interested in a kind of a retro format. There’s something about the tactile nature of a newspaper that we thought suited this initial ad really nicely. In addition, we wanted to deliver the manifesto in the ad, for which print is still the best medium.

Are you trying to broaden your audience base to attract the millennial demographic as well?
I think all of us as an industry are trying hard to engage those millennial consumers and bring them back to the theater. Movie-going is a habit, and we just need to try to get the millennials back into the habit. We think there’s a movement afoot among millennials to want really genuine, authentic experiences — organic food, listening to music on vinyl. Those are all the kinds of things that we think make the opportunity ripe to remind young movie-goers that there’s nothing quite like the experience.

Does this change the kind of film partnerships you have at all?
As far as the kinds of films we do, we’re always going to do those big experiential films where being in an IMAX theatre really transports you to a different place. Our lives are stuffed with so many distractions, and a movie is like a two-hour vacation — where you can just give yourself up to the story. We think that because IMAX is such an immersive way to see a movie, it really delivers on that promise.

How would you deem the campaign as having been successful?
On digital and social, we will look at all of the typical metrics. Click-throughs on the landing page to ticket purchases and other content on the website: likes, shares, sweepstakes registrations and e-mail sign ups. Ultimately, we would measure a full campaign on its ability to drive IMAX attendance and revenue. However, for a single execution, we want it to deliver the precursors to sales. For us, that is salience — a state of brand awareness that makes us stand out from other brands in consumer’s minds. We are also trying to deepen consumer understanding of why IMAX actually delivers. We have near-universal awareness, but we want to build meaning for the brand.