What to do when a social media star trolls your brand 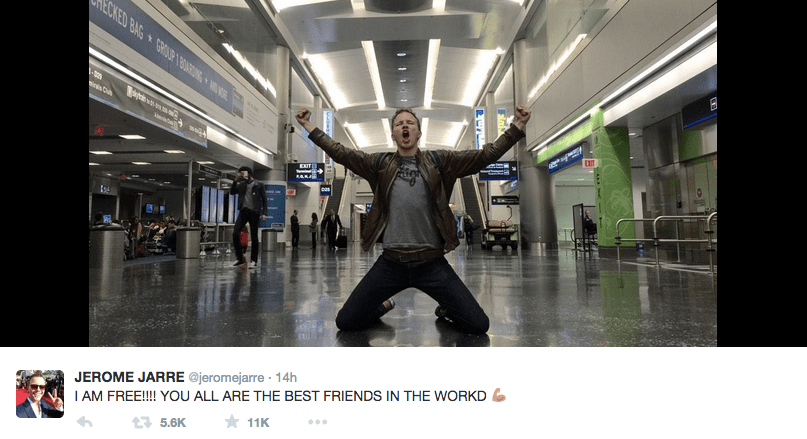 Jerome Jarre might be a “social media star” — if numbers are any indication– with over 7.5 million followers on Vine and over 872,000 followers on Twitter. He has even worked with brands such as GE and MTV, who have tried to cash in on his popularity among the younger demographic. But being a Vine celebrity doesn’t save you from detention when a prank backfires, which Jarre learned the hard way.

Gen-Z’s favorite Frenchman, famous for his six-second Vine pranks, crossed the line and took an unnecessary flight– pun intended– on an American Airlines flight from Mexico to Miami yesterday, where he jumped out of the bathroom into the aisle wearing Speedo and an inflatable duck around him for a new video. Things soon escalated, with a cabin crew member being rubbed the wrong way and the threat of an arrest looming on Jarre upon landing.

Amid all the chaos, Jarre took to social media, doing what he does best. He summoned his legion of followers to his rescue– asking them to use the hashtag #AmericanAirlinesCHILLOUT, launching an offensive against the airlines. The hashtag trended soon after, and has gathered over 66,000 mostly sympathetic mentions within 24 hours, according to Topsy.

Influential or not, a troll is still a troll. But how should brands react? In the age of social media, ignoring people — especially people with massive followings — is not an option.

American Airlines for its part, was not swayed by the overwhelming positive sentiment in favor of Jarre and stuck by its employee. On Twitter, it reached out to Jarre offering help. That tweet has since been deleted. American decided not to press any charges. That might have been a good idea.

Marco Hansell, the founder of Speakr, a company that matches such social influencers with brands, said that brands needed to tread cautiously in their approach to dealing with these social media “stars” with huge followings. If anything, this series of events demonstrated how quickly something can snowball into a big problem for brands.

“The drawback is that the bandwagon can go negatively and have a bad impact on the brand,” he said. “It’s best to be playful rather than immediately taking the legal stance.”

Matt Wurst, vp and general manager of social media at 360i agreed, but cautioned that sometimes, no response is the best one.

“It’s important to remember that not every situation warrants a response – in fact, most do not,” he said. “But when brands choose to respond, they must do so in a way that aligns with their core values, objectives and messaging strategy, as well as adhere to a tone of voice that is consistent across all media channels.”

Jarre didn’t let up: he continued to tweet throughout the event, claiming that he was “about to be arrested” when he landed, that “cops are entering the flight,” and that his yellow Speedo cost him “3 hours with the FBI.” While the FBI didn’t confirm the events, the BBC reported that the police at the Miami-Dade Airport confirmed that he was detained.

Jarre told Digiday that he was merely entertaining people and trying to make them laugh.

“Everyone in the flight loved it, but one crew member was grumpy and mad that we were recording and so he called the airport,” Jarre said. “From what the FBI told me, he said I was trying to take over the flight.”

“At first I was interviewed for trying to take over a flight, then for sexual assault, and then they talked about removing my visa and banning me from all flights,” he continued. “But the cops and FBI were actually really good people and they ended up realizing that AA way overreacted.”

Coincidentally, perhaps, Jarre also released a video just a few days ago where he said he was done making videos for profit — a realization he said he came to after an unnamed New York ad agency offered him $1 million for a campaign.

Casey Norton, a spokesman for American told Digiday: “Speedos are just fine on the beach, but no one wants to see them dancing down the aisle at 35,000 feet.”