Lane Bryant wants the world to know that its models are no angels with a campaign that’s prodding pretty unsubtly at fellow lingerie retailer Victoria’s Secret.

The plus-size retailer launched a new campaign this week, anchored by the hashtag #ImNoAngel, and the bold body-positive message is generating social media buzz.

The huge campaign is meant to introduce Cacique, Lane Bryant’s new lingerie line – and it’s also an overt response to Victoria’s Secret (whose often high-profile models are, of course, referred to as Angels). Last year, VS launched an ad promoting “The Perfect ‘Body’” featuring a group of models who all happened to have the same tall, stick-thin bodies. After receiving criticism, the brand publicly apologized.

Lane Bryant isn’t the first brand to try to capitalize on the current backlash to absurdly proportioned (and Photoshopped) models common in underwear ads. In February, ModCloth launched a digital campaign that featured its own diverse employees as the models. And Dove began promoting “Real Beauty” in 2004, a long-vetted campaign that features real women in ad spots.

Rather than taking a side on body types (i.e., “Bigger is better”), it seems like Lane Bryant is taking a stance against Victoria’s Secret’s narrow-minded ideal of a perfect body, which the lingerie brand very forwardly demonstrated with its previous campaign.

Digiday reached out to Victoria’s Secret and Lane Bryant for comment, but we have yet to hear back.

The hashtag generated just over 7,000 tweets on Monday. According to data culled by Crimson Hexagon, of those, 36 percent were positive in nature, while 2 percent were negative. The rest (62 percent) were neutral or news-sharing.

And while 71 percent of posts that were gender identifiable came from women, the tweet with the most shares came from NFL wide receiver Chad Ochocinco. His tweet, a retweet of Racked’s article, gained nearly 600 retweets. 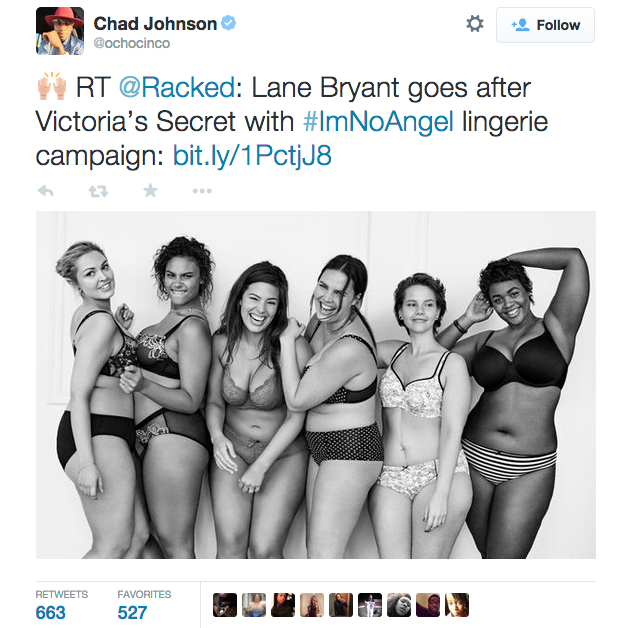 Many women on Twitter spoke out in support of the anti-Angel sentiment:

So, um, they are coming directly at VS, and I LOVE all of this #ImNoAngel campaign! YESSSSSSSS. https://t.co/uSD4elnZz0

#imnoangel commercial was probably the best commercial ever that expresses that no matter what size you are, you should always love ur body.

My sexiness doesn’t happen despite anyone else. It happens because I’m a strong and beautiful woman, there is room for us all. #ImNoAngel

But, others felt that the campaign was too mean-spirited, and simply reversed the negative body image to project it into skinny models.

The only thing I’m saying about #ImNoAngel: can we have body-positive campaigns that don’t pit body types against each other/shame bodies?

Lane Bryant’s social team has been very active in responding to tweets about the campaign, including a tweet that quipped “Wings aren’t required for self-esteem to soar.”

However, the brand wants to make it clear that what it is throwing at Victoria’s Secret isn’t “shade.”