At a time when “inbox zero” is a source of pride, nothing gets an office drone’s goat as much as a violation of the unwritten rules of email etiquette. Even those who toil in cubicles deserve a modicum of civilized behavior.  So we asked agency executives to tell us about their biggest email pet peeves.

The overtly affectionate
Appending “kisses” at the end of emails and messages is a particularly common affectation among those from Europe or Australia, but that can spill over into business communication if you’re not careful. “When you reply quickly to an email and, without thinking, sign off with ‘xx,'” said Sean Cummins, global CEO of Cummins & Partners. “I’ve sent serious emails to some of my male clients that are appended with kisses. Secretly, I think they like it.”

The PLEASE REPLY
Having an aggressive and brash subject line does work, although it annoys people. As one exec said, “One particular contact of mine puts ‘Please Reply’ as the subject line of all her emails. While somewhat aggressive, this is actually a stroke of evil genius as it compels you to reply even when you don’t want to. I’ve stolen this strategy for myself and find it particularly effective when corresponding with government departments or customer service representatives.”

The third wheel
Some people just don’t know the art of the bcc. Often, people find themselves dragged into never-ending email chains. It’s worse if you can’t actually tell the person off: “My client, [redacted] insists on having entire conversations with her team and my team and keeping me on the chain when I don’t need to be. It’s stupid and irrelevant, but it makes her feel important, so OK,” said one agency president.

Stop stalking me
If you’re in a position of power at an agency, vendor emails are pretty common. David Berkowitz, chief marketing officer at MRY, hates when people send generic emails or, worse, when they address him as someone else. Formatting is also a pet peeve: “Showing a clear cut and paste job” is common, and annoying, he said. But his worst peeve is “salespeople who feel they should email me every day. Not a fan of hearing more from a vendor than I do my wife,” he said. “When I tell people something’s not a fit for me and they reach out a few weeks later trying to set up a call again.”

The overly inflated signature
You want to be easily reached, sure. And you also want to make sure people know that you’re available on lots of cutting edge-platforms. But Cummins said that sometimes, email is enough. “They offer up their Skype, Snapchat, Twitter, Facebook, Periscope, Whatsapp details. Often along with a high-res logo that clogs your inbox up with attachments.”

The shady tactic
Back to the vendors: They know getting you to respond is hard, so one common tactic is when they email you referencing a call or discussion that never happened, said one agency executive. “Pretending we already talked about something when we’ve never communicated before is particularly shady.” 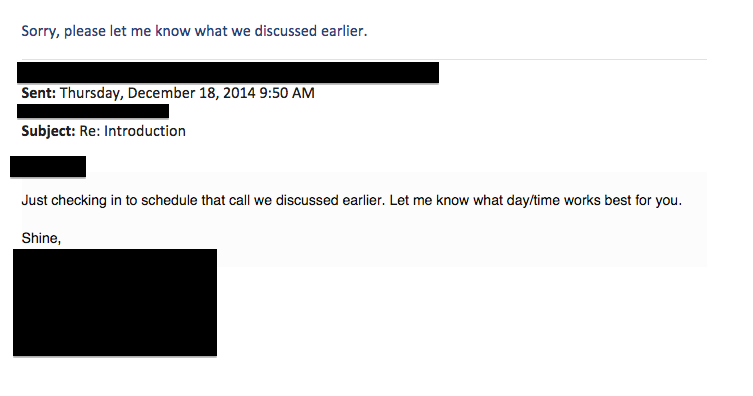 The ALL CAPS EMAIL
People still do this. Cummins said he calls it”too lazy to give a shift.” Just as bad: The all-lowercase email. One agency CMO said it makes people sound like teenagers.

The politically incorrect
This isn’t a pet peeve as much as a “thing you should never do.” Ron Fierman, partner and president at digital shop Digital Pulp, said he’s on a listserv of non-profits. “One of my biggest pet peeves is when someone posts an opening for a non-paying internship position. It’s slave labor,” he said.