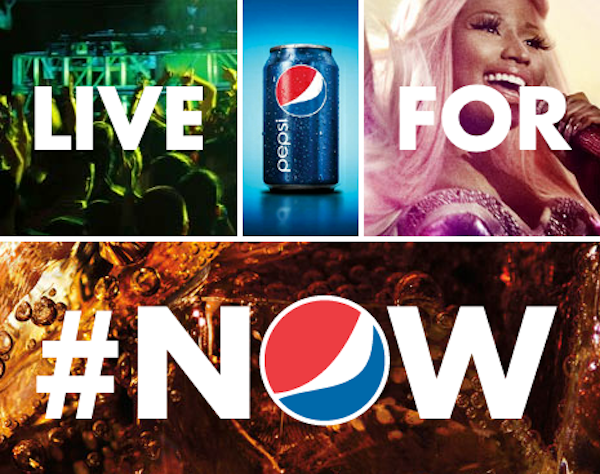 Pepsi has talked about being the soft drink of choice for the “new generation” for ages, and its recent deal with Twitter is an example of the way that the brand is trying to bring that notion to fruition. Pepsi has inked a year-long contract with Twitter, which is the biggest deal that the social media platform has ever done with a brand, a Pepsi exec confirmed.

The partnership is an extension of Pepsi’s current “Live for Now Music” program. The Twitter component will rely heavily on live-streamed content, branded video and music downloads. Each Wednesday, over the course of 52 weeks, “Live for Now Music” will provide fans an instant overview of the artists, music and music news trending that week on Twitter. Every week @pepsi will tweet about the exciting and current music that the Twitterverse is most passionate about. Pepsi will also offer free music downloads from the Amazon.com MP3 Store to consumers who follow @pepsi and include the hashtag #PepsiMusicNOW in their tweets. Additionally, Pepsi will stage a series of pop-up concerts in the U.S. this summer and fall. These concerts — featuring major music artists — will be announced first on Twitter and streamed live on the platform through Pepsi’s enhanced profile page and on PepsiPulse.com. The concerts will also be available on-demand afterward for fans who want to watch later. Pepsi Twitter followers can influence the concert program by tweeting out the songs they want included. The soft-drink maker has not revealed which artists it is working with for this effort.

“In early May, Pepsi launched a new positioning, and it is really about inviting people to live their lives to the fullest and take advantage of the moment,” said Shiv Singh, global head of digital for PepsiCo Beverages. “The Twitter part is a critical piece to this repositioning.”

What’s most unique about this effort is that Pepsi will work with Twitter to analyze and determine which topics in music are top trending. Twitter will help Pepsi do this by analyzing its hundreds of millions of tweets. The topics will be compiled and made into the short video spots that debut every week on Wednesday.

“Twitter is about the now,” Singh said. “People share exciting things they are doing on Twitter. So it fits that ethos and style, and the other part is that Twitter is a great music platform. All of the major artists have a huge following there and engage with their fan base  there. Music is something people talk about on Twitter. Historically, Pepsi and music have a special relationship. When we connect those worlds, we are able to move our equity and sales indicators.”