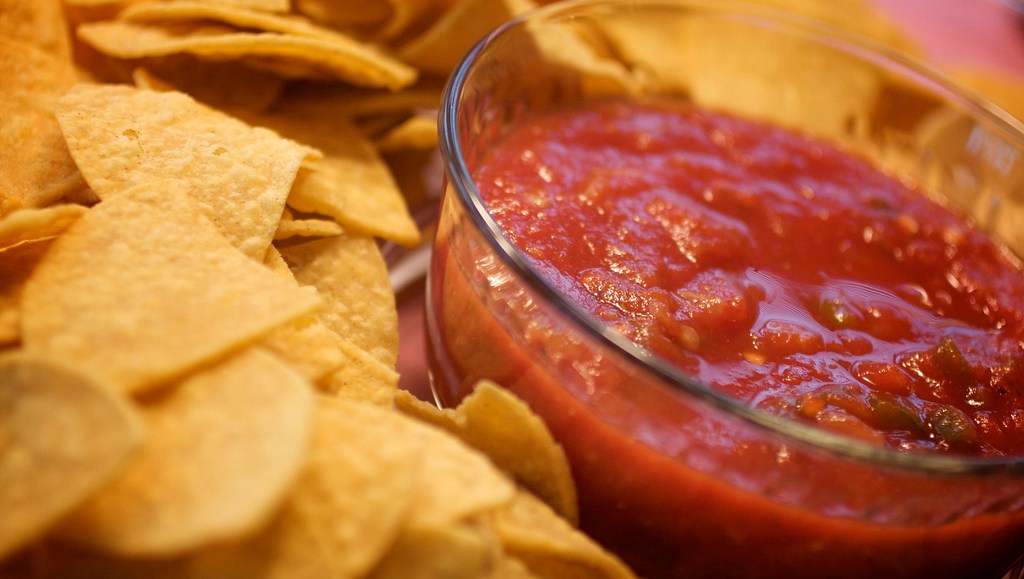 Update: Campbell’s Soup denies that they have a verified Twitter account for Pace Foods. The entire Twitter “meltdown” appears to be a hoax, perpetrated on Kinane by comedian Randy Liedtke. We got had, too. Apologies.

Things got a little caliente under the collar yesterday for Pace Foods, the brand most known for its Pace Picante sauce. A series of private messages were ultimately made public resulting in the apparent firing of a Pace employee and the suspension of the company’s Twitter feed.

It began in the morning when Pace Food’s Twitter account favorited offensive tweets written by comedian Kyle Kinane. The weird thing? His insulting tweets had been written written 10 months ago. Kinane, noticing that the account was favoriting any tweet he used mentioning the brand, took advantage of the situation, and  made a few jokes at Pace Food’s expense.

As Kinane continued to tweet about Pace’s presumed Twitterbots, a person named “Eric” representing Pace sent Kinane a private direct message, asking him to remove all mentions of Pace from his account. What follows is a highly unusual (and fairly humorous) private exchange in which at least two other Pace associates chime in. Kinane made the entire exchange public with the following screenshots: 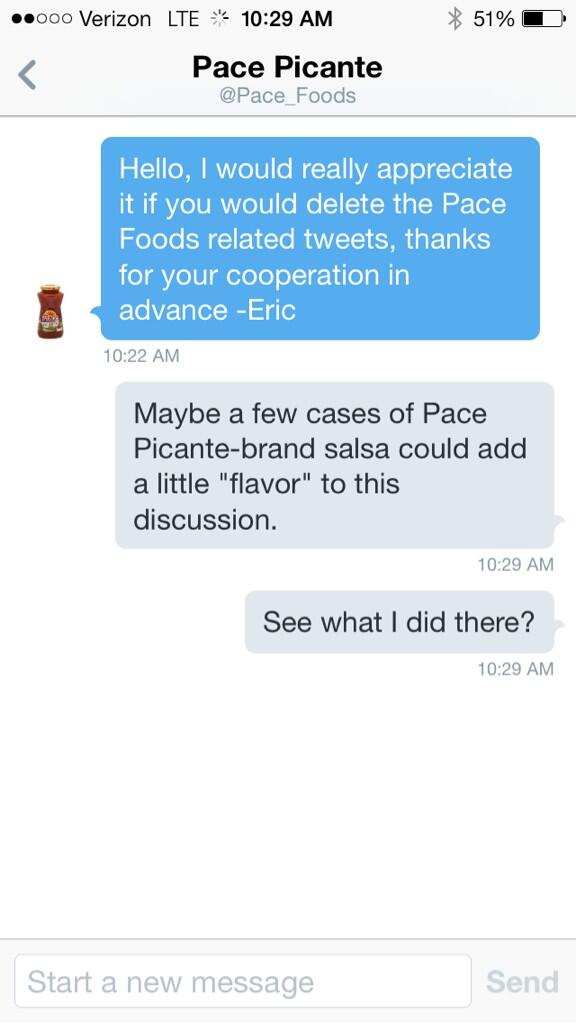 The direct messaging continued between Kinane and Pace, and gets a bit weirder. 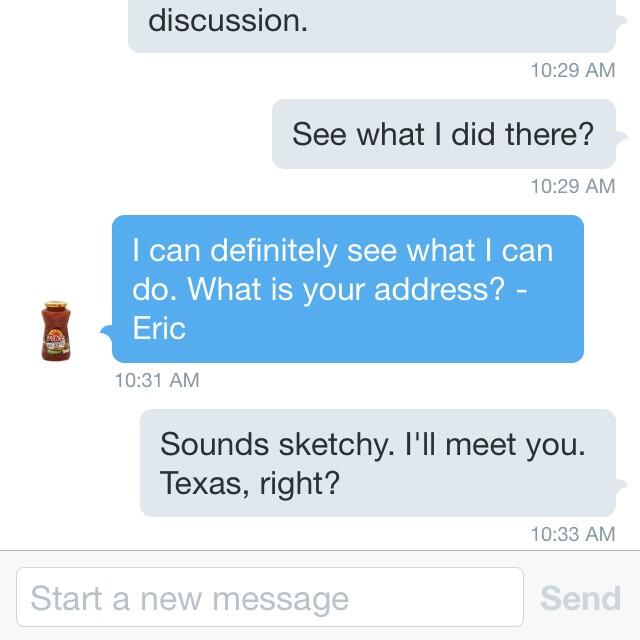 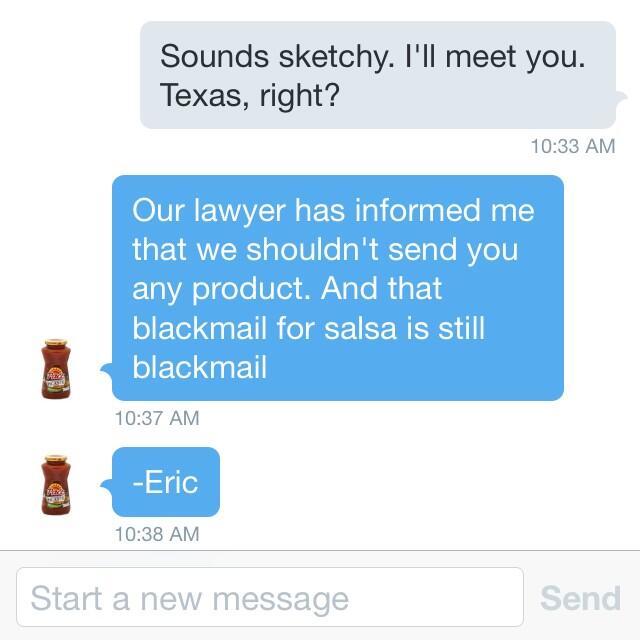 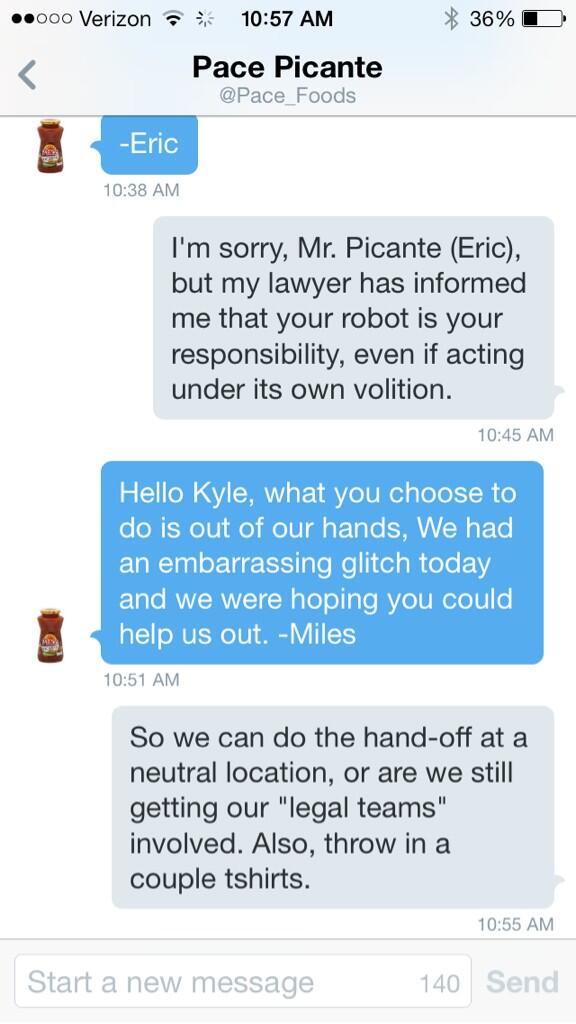 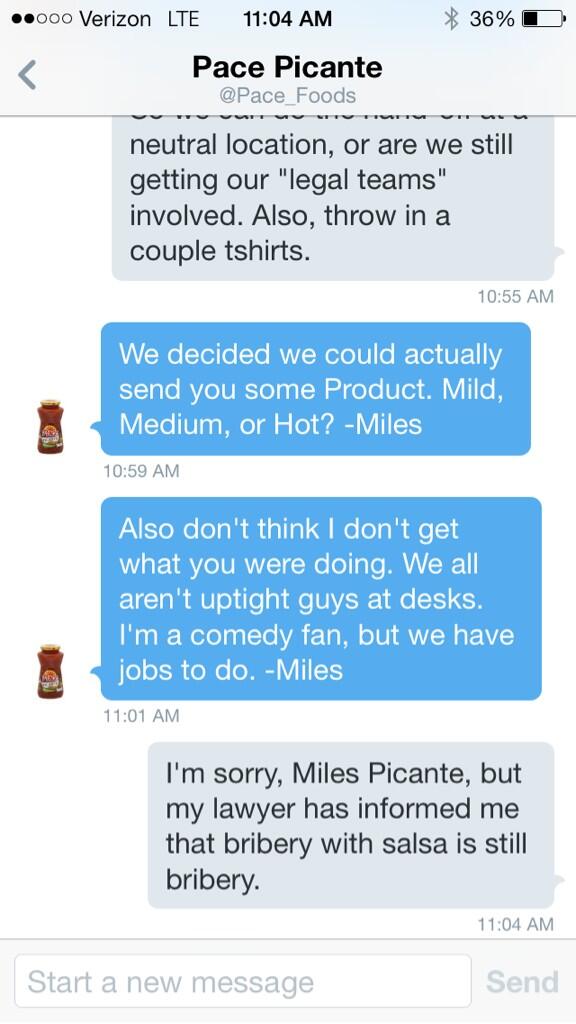 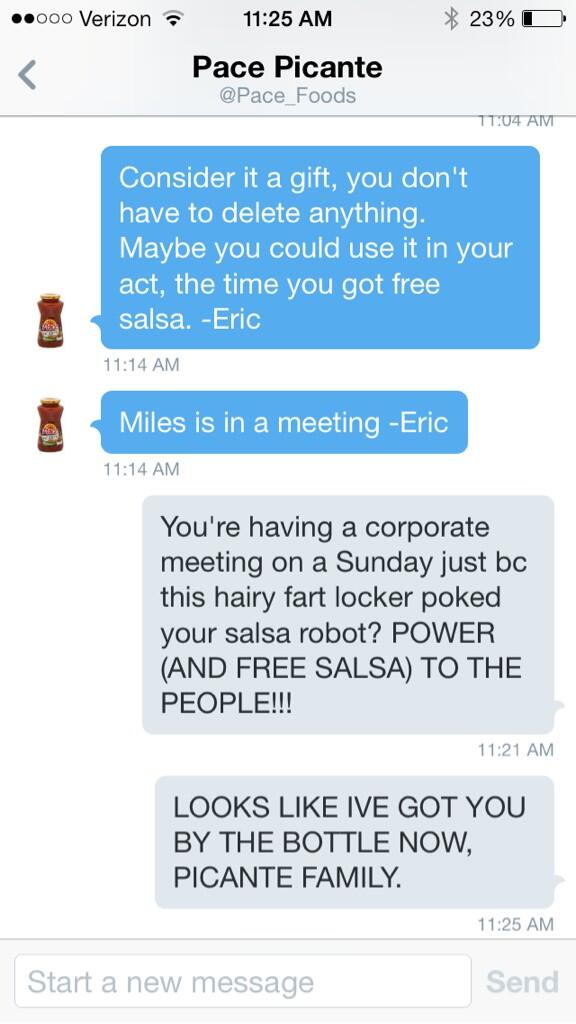 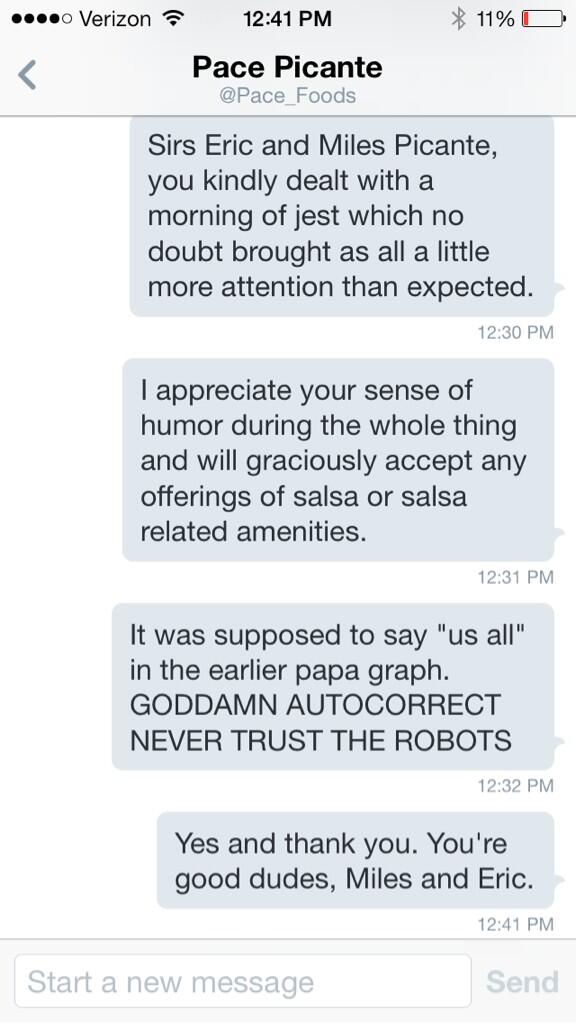 It almost seems as though the episode had come to an end, until a third associate, “Sharon,” steps in. 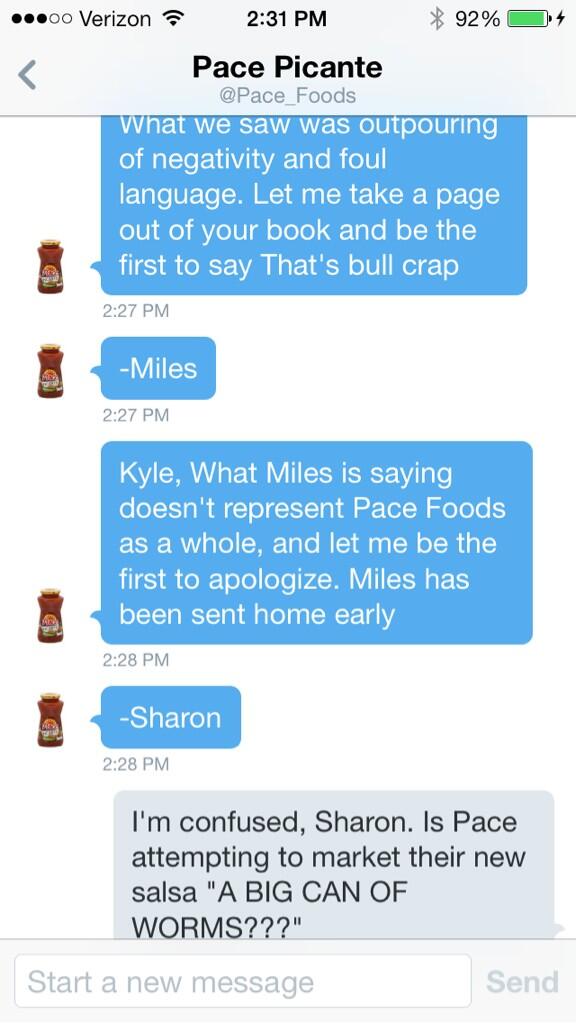 Next, “Sharon”  tries to continue the conversation with Kinane in direct messages. 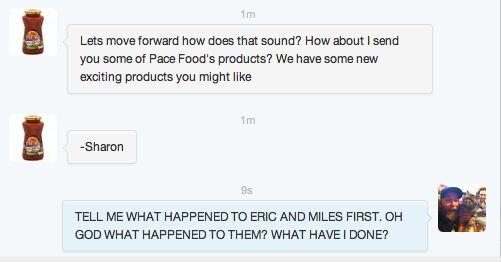 …and tweets offensive things from his personal account to Kinane. 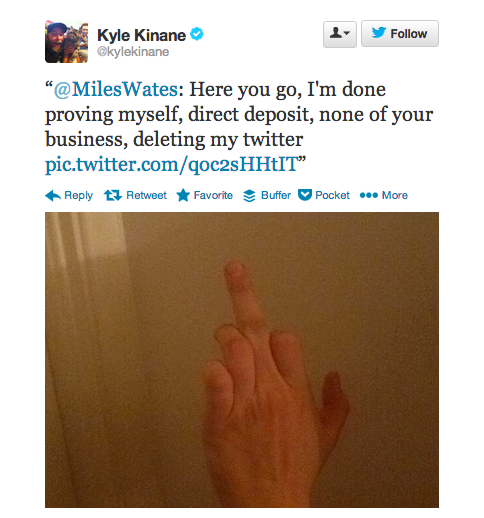 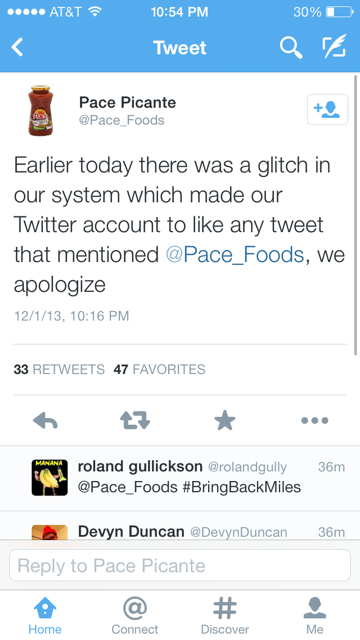 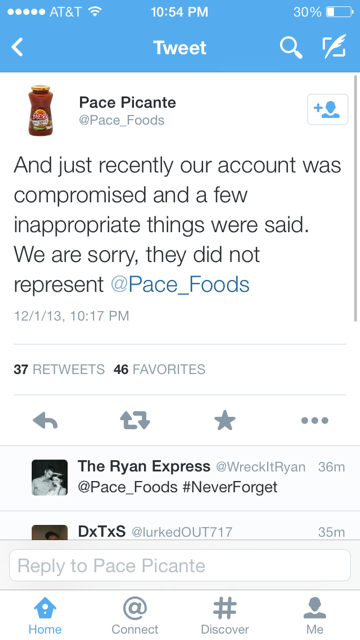 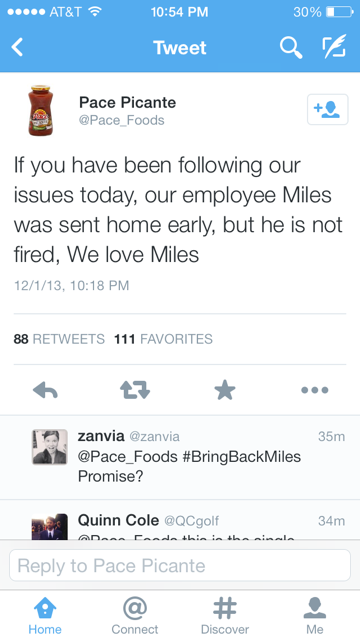 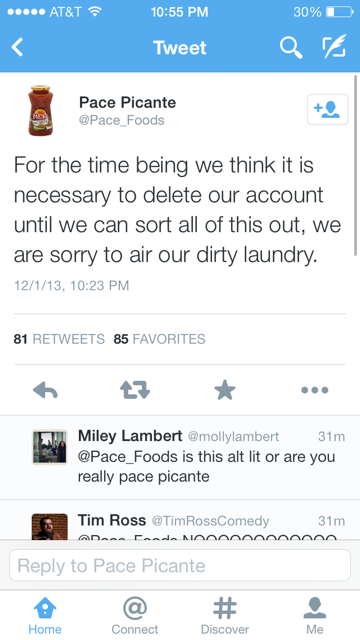