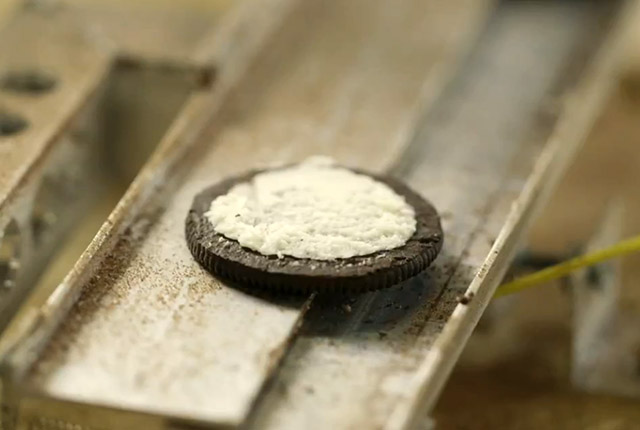 Oreo is really stepping up its game lately since all of the buzz the brand received from its Super Bowl tweet.

As part of its “Cookies vs. Creme” campaign, Oreo just released this awesome short video featuring Portland-based “physicist and copywriter” David Neevel and his Oreo separator machine. The Rube Goldberg-esque contraption looks pretty elaborate, but basically it just splits the cookie and buffs off the cream.

The reason the video is so great is Neevel’s delivery, his comical seriousness, which feels a bit like Dwight from “The Office.” His very-Portland epic mustache doesn’t hurt either. He explains that he made a lot of sacrifices while designing and creating his Oreo separator machine, or OSM as he calls it.

“It was a big time commitment to build the machine. I had to work some long hours and I didn’t get to see my girlfriend or my dog for hours at a time sometimes,” explains Neevel in the video. “And I had to try to find, like, a good sandwich in this part of the city and stuff — there were a lot of sacrifices, I guess.”

Neevel is actually a copywriter at Wieden+Kennedy Portland, the agency behind the video. There will be more videos coming in the follow weeks featuring other Oreo separating techniques. It’s awesome to see something like this from a brand.