Meet the fashion brand with a publisher’s heart 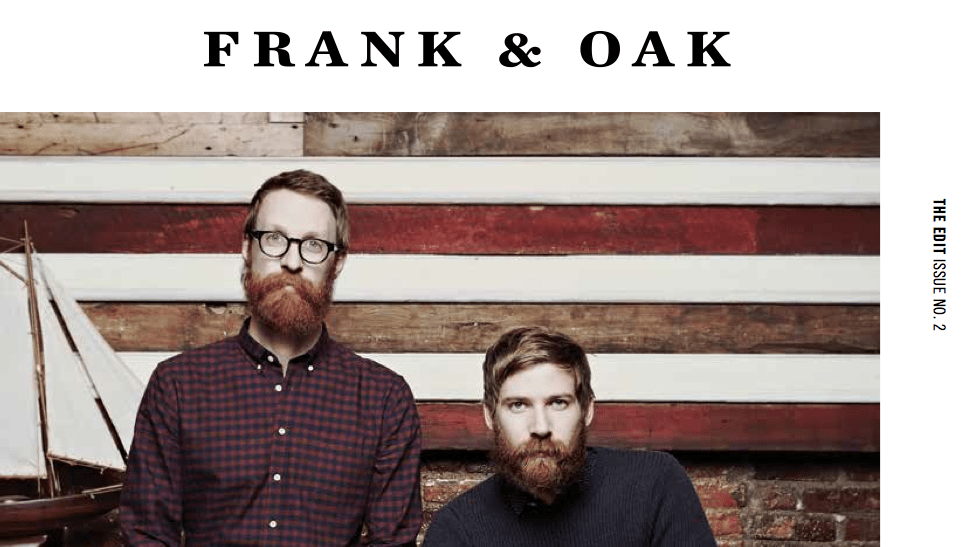 Venture-backed companies tend to be obsessed with using the efficiency of the Web to “disrupt” old business models. But for 2-year-old men’s fashion company Frank & Oak, building a brand name from scratch meant turning to the decidedly costly, old-school practice of printing a magazine.

“Creating content is not a cheap offering, but it speaks to the kind of brand and business we want to create,” Frank & Oak CEO Ethan Song told Digiday.

Brands are quick to boast that they are in the business of creating “content,” not just selling widgets. Often these efforts come off as uninspired, thinly veiled advertisements. But Frank & Oak has made media production a central part of both its operations and allure. Other than its one brick-and-mortar location in Montreal and the occasional pop-up store, Frank & Oak exists entirely online. The money it saves on overhead is then funneled into a dedicated editorial operation. The company has seven full-time editorial staffers and allocates more than a third (35 percent) of its marketing budget to its editorial operation.

Frank & Oak isn’t the first to embrace an editorial-driven retail strategy. Fashion brand Acne has its own magazine, and men’s goods site Bureau of Trade takes a magazine approach to e-commerce. All of these instances fall in line with what Fab founder Jason Goldberg called the coming rise of “emotional commerce.”

But in addition to the magazine — a quarterly called The Edit — the group maintains company blog The Hound, creates photos and videos for its Instagram feed and curates playlists on its SoundCloud profile. Whether it be via words or images or sounds, in print or online, Frank & Oak is working on creating an immersive culture beyond just the retail brand.

Much like venerated men’s lifestyle publications Esquire and GQ, Frank & Oak’s multi-pronged content strategy is about depicting a certain lifestyle its customers might aspire to. Frank & Oak differs in that it is not as interested in showing the end product as it showing how that product came to be. The Esquire or GQ man wants to know the best new barbecue joint. The Frank & Oak man wants to know how the sausage there is made, so he can possibly do it himself.

The blog post about Frank & Oak’s Fashion Week appearance, for instance, was less about what happened on the runway than what went down behind the scenes and the hours of work that went into building the stage and preparing for the show. “Other brands will focus on the celebrities and the party,” Song said. “We focus more on the creative process.”

Process is integral to Frank & Oak’s value proposition. It designs, creates and sells its own line of men’s clothes. Keeping editorial team in-house allows it to “express the culture of the company,” Song said.

That doesn’t mean Frank & Oak’s editorial is entirely product-oriented. The brand is willing to divert customers’ attention away from Frank & Oak and toward topics that have nothing to do with fashion. The blog recently published “Books to Read in 2014,” a collection that was heavy on business titles such as “Lean In,” “Hatching Twitter” and “The Everything Store.” The most recent edition of The Edit was released last fall, and its feature story was about enterprising chocolatiers Michael and Rick Mast. Song isn’t even afraid to direct his audience to some of his brick-and-mortar competitors. He recently published a blog post about his favorite men’s stores in New York.

The underlying philosophy is that men don’t want a catalog — they don’t even want straightforward fashion coverage. The content needs to be informative for it to resonate.

“We found that when it comes to men’s fashion, they care about looking good, but they care more about the context: ‘What are those clothes used for?’” Song said.

To that end, Frank & Oak gives The Edit away for free to small businesses and hotels in major cities in Canada and the U.S. and to select individuals. The last edition printed approximately 50,000 copies on mat paper. The next issue is due out in April and will be met with an event in New York debuting Frank & Oak’s spring line.

The story that ultimately matters is whether this has any tangible effect on sales. Frank & Oak’s number of registered users has nearly doubled to 1.1 million this February from 600,000 last February and now ships more than 35,000 orders per month.

It’s difficult to quantify how membership has been affected by a print magazine. But since Frank & Oak doesn’t have to worry about the overhead that comes with a physical store, said Song, the magazine remains a worthwhile expense.