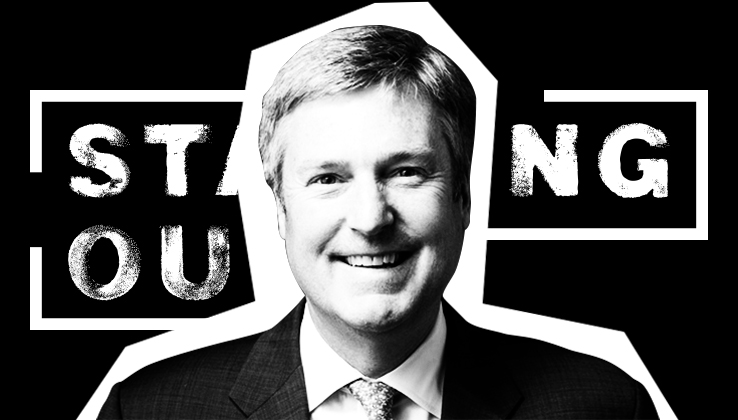 John Osborn recently made a major leap when he moved to media agency OMD after 25 years at creative shop BBDO. But the seemingly sharp turn in his career was the result of an organized mind. On this episode of Starting Out, Osborn discusses being an over-programmer, obsessively charting out his career path, which began — like many kids — with mowing lawns.

I grew up with a single mom. She raised me and my younger sister. We were the original latch-key kids. My mom would work hard to put food on the table and a roof over our heads. We came home from school, prepared our own dinner, and it forced us to take on responsibility.

I started working even before the legal age. I painted houses and mowed lawns. I also went door to door to raise money to clean hazardous waste sites. Some people would close me out, but some people engaged with me, depending on how I approached it and placed myself in their shoes. These were tough neighborhoods. I am surprised someone didn’t throw me in the back of a car, and throw me in the fields outside of LaGuardia Airport and leave me there for the coyotes.

I got in advertising because Leo Burnett came to my college. I was in Dartmouth in Hanover, New Hampshire. They had companies come up to recruit. There was a presentation that was given by a representative with P&G, along with a person from Leo Burnett. They told a great story about how the two companies worked together to develop iconic advertising to move the business forward. I thought to myself, “If I take the art of making a case that I learned as a paralegal and combine it with the art of persuasion that I learned in Washington, here’s something you work hard and see as a physical manifestation of all that work in the form of an advertising campaign.”

I was probably way too rigid in a number of ways. In a simplistic sense, I was completely overscheduled. I’m also very Type A. I was able to get into routines where I would do things in a certain way. Days would turn into months and years, and I became so rigid that in retrospect, in a rare moment of solitude, I would reflect and say, “My gosh, so much time has gone by!” I didn’t view it as wasted time; I just viewed it as time where I could have been less rigid and allowed myself to dream, explore and think, “What if?”

One of the things I wish I knew earlier in my career was that I knew I wanted to be in advertising, but I was probably too rigid in that. I didn’t give myself any flexibility along the way. It’s one thing to have a destination in mind. You don’t want to be hell-bent on the destination, but you also want to enjoy the journey and explore if the opportunities present themselves.

I didn’t develop that sense of looking beyond my day-to-day job until a lot later in my career. If I had that self-awareness and was less hell-bent on what the next rung on the corporate ladder was, I would have gotten involved in some stuff in my career earlier.